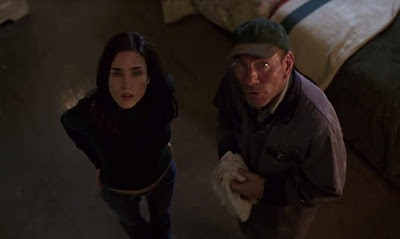 There was a time when Hollywood had a small cottage industry remaking Japanese horror films for an American audience that otherwise wouldn’t spend time watching a movie with subtitles. This is how we got the 2005 version of Dark Water, a remake of the 2002 film. Surprisingly, this remake has a cast that I can’t quite believe for a horror remake. How good? One Oscar winner and three Oscar nominations good. And for all that, it’s very much a disappointment.

Dahlia (Jennifer Connelly) and Kyle (Dougray Scott) are in the middle of what is turning into an acrimonious divorce. At the moment, their daughter Cecilia (Ariel Gade) is the bone of contention. Kyle wants Dahlia and Ceci to move to Jersey City to be closer to him (Dahlia is convinced that this is where his new girlfriend lives), but Dahlia has decided instead to move to Roosevelt Island, located in the middle of the East River, which is cheaper and has one of the best schools in New York.

She and Ceci end up in a rundown apartment complex overseen by Mr. Murray (John C. Reilly), who appears to at least want to make the place livable. The building’s super is a man named Veeck (Pete Postlethwaite), who makes repairs as necessary when he can. During their first viewing of the apartment, Ceci disappears and is discovered on the roof, where she has found a Hello Kitty backpack. She is told that if no one claims the backpack in seven days, it is hers. While Ceci was initially not interested in living in the building, she suddenly changes her mind, and Dahlia agrees to rent the apartment.

Two things start happening right away. The first is that Ceci has a new imaginary friend named Natasha, and Natasha seems to know more about things like Dahlia’s past than she should. The second thing is that there is a large, discolored water spot that is growing on Dahlia’s ceiling. Her own investigation leads her to the apartment above hers, which seems to be abandoned and used by some of the kids in the building to cause problems like turning on all of the taps and leaving.

Dahlia starts losing time, having odd dreams, and forgetting things. This causes her some potential problems with the divorce, although she has hired herself a good lawyer (Tim Roth). At the same time, Ceci starts having more problems at school, many of which come from her insistence of the reality of Natasha, causing some issues for her teacher (Camryn Manheim). There’s some good creepy stuff here, but it’s also going exactly where you think it is.

Since this is a horror movie, the things that are shocking for the characters aren’t shocking for us. Knowing the genre, you’ve already figured out a few things, like the fact that Natasha is real. You’ve probably guessed that the Hello Kitty backpack was originally Natasha’s. Because of the name of the movie, you’ve probably figured out that the dark, spreading stain on the ceiling of Dahlia’s apartment has something to do with Natasha as well. And you’d be right.

And really, that’s the problem here. There’s nothing here that you can’t figure out a long time before it becomes evident to the characters in the movie. The plot has very specific beats it wants to get to, and it gets to them methodically and in ways that are obvious to anyone who has seen any horror movie at all in the last couple of years.

That’s such a disappointment, because there is a premise here that might be interesting. That said, I’m not entirely sure where I would go with that premise. The minute you suspect that there might be a missing girl and that the new girl in the apartment has an “imaginary” friend, the direction the film goes in is planned out.

The other significant disappointment is what the film does with this cast. Jennifer Connolly is an Oscar winner, and Reilly, Roth, and Postlethwaite all have nominations, and not a one of them is very memorable in this film. In fact, it’s Ariel Gade as Ceci who is not only the most interesting character in the film, but the one who gives the best performance in scenes over and over.

Are we done with the constant immediate remakes? I hope so, because most of them (The Ring is a notable exception) are so much worse than the films they are attempting to duplicate. I don’t immediately dislike remakes, but when that remake is so lackluster and pedestrian, I have to wonder why we’re bothering.

Why to watch Dark WaterThe idea is potentially interesting.
Why not to watch: You can see exactly where this is going long before it gets there.