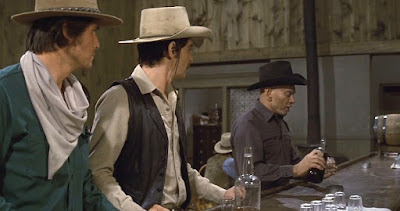 Every movie is a product of its time, of course, but a lot of science fiction is very much a product of the year (or at least decade) it was made. The irony of a film series like Star Wars is that the technology for the prequels was so much better than for the original trilogy, so there’s a sense of moving forward in time despite going back in time. It means that a lot of science fiction doesn’t translate well into the future. Westworld has some issues with that. When we see things from the robots’ point of view, for instance, it’s not even Atari 2600 graphics quality.

While this does affect the way Westworld looks today, it doesn’t really affect the enjoyment of the film in general. It’s hard to dislike this movie, particularly when its influence is taken into account. John Carpenter credits Yul Brynner’s Gunslinger as a sort of spiritual ancestor to Michael Myers. It’s almost certain that The Terminator wouldn’t exist without Westworld (and probably The Stepford Wives) existing first. Michael Crichton’s own Jurassic Park is just a riff on the ideas that Westworld put forward, substituting genetically reconstituted dinosaurs for gunslinging robots.

Most people are more familiar with Jurassic Park, so I’ll put Westworld in those terms. The movie posits a futuristic adult playground where people pay $1000/day (roughly six grand in today’s money) to live in either Medieval World, Roman World, or Western World. The three “worlds” are populated both by human beings and by androids designed to do whatever the guests want of them. In Western World, this means female androids that are in many cases brothel inhabitants and male androids that are gunslingers who exist to be fought and killed by the guests. Each night, the slain androids are taken back to the factory and refurbished and repaired.

As the name of the film implies, our main characters, John Blane (James Brolin) and Peter Martin (Richard Benjamin) are headed to Western World, a place where John has vacationed before. Once there, Peter has trouble fitting in until he is provoked into a gunfight by the Gunslinger (Yul Brynner). With the Gunslinger vanquished, the two head off to a brothel for the rest of the night.

But all is not rosy in the futuristic theme park. The machines are starting to act up and malfunction at a much higher rate than expected. They’re refusing to do what the guests want and, worse, are starting to attack the guests in little ways. You can see where this is going. You remember when the dinosaurs got out in Jurassic Park and started attacking the humans? Well, that’s exactly what the robots are going to do here, with the Gunslinger being the implacable, unstoppable force that pursues our heroes until the end of the movie. In other words, just as Michael Myers was based on the Gunslinger, so too were the raptors.

That’s pretty much it. We have about half an hour of set-up, half an hour of things getting crazy, and half an hour of Yul Brynner walking toward Richard Benjamin at a steady pace. It really doesn’t need anything more than that. It’s a high concept film that sells itself entirely on that concept and on the performances.

On the surface, the obvious performance to focus on is that of Yul Brynner. He is the face of the movie in a lot of ways, and the movie would not be nearly as effective without his steely-eyed and remorseless performance. It’s worth looking at a few other performances as well, though. Much of what works in the film is the quirkiness that is Richard Benjamin. That he never really feels at home in Western World and is always just a little nervous is a perfect counterpoint to the overconfident performance of James Brolin. It’s also worth noting the brief comic performance of Dick Van Patten as another Western World tourist who ends up as the sheriff.

In 1973, it would be difficult to say that Westworld wasn’t a really cool science fiction movie. Today, you really have to try to see it from the perspective of more than 40 years ago. Thankfully, this isn’t too difficult, since so many other movies and stories have used this for inspiration.

Why to watch WestworldThere’s a vast amount of science fiction and horror come from here.
Why not to watch: It really looks like it’s from 1973.

Posted by SJHoneywell at 1:52 PM