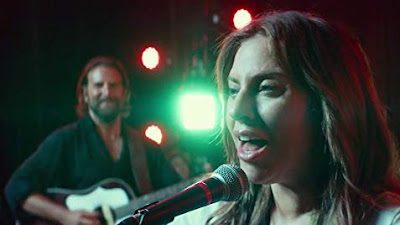 I still have other movies from the latest 1001 Movies book to watch and still have some movies from the last Oscars to watch, but none have been more dreaded by me than A Star is Born. It has nothing to do with the fact that this is easily classified as a musical, since it’s a non-traditional one at best. This is not a movie where people sing their feelings to each other, but one where the story is about musicians so a great deal takes place with them performing on stage. No, the reason is that I want to know how many times I have to watch this story.

I mean, I’ve seen the 1937 version of this story that was nominated for Best Picture. I’ve seen the 1954 version that somehow wasn’t. I haven’t seen the one from the 1970s since, aside from a few gushing fans, I haven’t heard anything good about it. And now there’s this version of the story that changes a few of the names and a few of the details but not a great deal else. If you’ve seen any previous version of this story, you know exactly what is going to happen here. You know all the beats and you know the ending. There’s nothing different here.

And that’s honestly my problem with it. A Star is Born is well-made and it features Lady Gaga in the ingénue role. She’s a great pick for the role because she is staggeringly talented. In that respect, she’s a great callback to both Barbra Streisand and Judy Garland who played the role before her. To make this story work at all, that role has to be filled by someone who could be believably discovered and turned into a star based entirely on her talent. That’s her, and while there are certainly others who could do this role (Beyonce comes to mind), she is magnificently cast.

It’s also a shock to realize that we now live in a world where I have to show some respect to Andrew Dice Clay. This is the second time (Blue Jasmine being the first) where he’s been given a dramatic role and been really good in it. He’s almost unrecognizable as Ally’s (Lady Gaga) father. And we get Sam Elliott, who always adds gravitas to everything he touches. Even Bradley Cooper, about whom I am relatively ambivalent, is fine in this in the role opposite Lady Gaga as troubled alcoholic singer Jackson Maine.

So with all of this, why am I so ambivalent about it?

The biggest reason for me is that for all of Bradley Cooper saying that with his directorial debut he wanted to explore new territory and for all of the fact that it has a powerhouse performer in Lady Gaga to use, A Star is Born has absolutely nothing new to say. As good as the performances are in general, there isn’t anything here that you can’t really get from the 1954 version with James Friggin’ Mason and Judy Goddam Garland. So much of this seems benign in that respect. We’re going to be given a story that is guaranteed to be compelling, and, given the right pieces in place, we’re guaranteed a film that is at least watchable.

And therein lies the problem. Lots of things are watchable. Being watchable shouldn’t be enough for entry into the 1001 Movie list. It feels safe, and while safe can certainly be entertaining, it’s not all that interesting. I don’t always want to be challenged in what I watch, but I damn well think I should be if it’s a movie I have to see before I die.

A bigger problem for me is just how little Lady Gaga has been given to do here. The entirety of her role comes down to singing a few songs and, more or less, standing by her man. Now admittedly, that’s the role traditionally, but certainly more could have been done here with her. The entire point of the film is that while her star rises, that of the man who discovers her falls into booze, drugs, and depression. But she’s so passive in this. It happens around her and she’s just kind of disappointed in him, even when he pisses himself at the Grammys.

Before someone else says it, I should say that I understand that there are a limited number of basic stories in the world. I know that there are plenty of movies that are just other movies with new paint and new disguises, so it can seem unfair that I’m bashing this one for being a remake of a remake of a remake. I loved both Drive and Outland and both are nothing more than reworkings of Shane or High Noon. So why express my vitriol for this remake?

Why to watch A Star is Born (2018): Hard to deny the talent.
Why not to watch: How many times do I have to watch this exact story?