A Good Reason to Push the Button 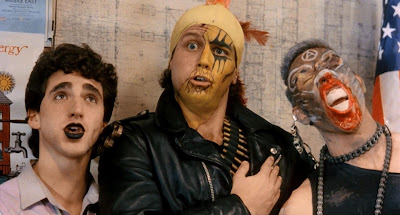 Okay, deep breath. Class of Nuke ‘Em High, based on the title alone, is not going to be a serious movie. When you discover that this is a Troma movie made in part by Lloyd Kaufman, that’s going to clearly be the case. This is going to be a horror-comedy, with the emphasis on comedy. We’re going to get mostly gross out stuff, bad acting, and stupid jokes. At their very best, Troma films are funny like a cat sliding off a newly-waxed table is funny. Class of Nuke ‘Em High is not Troma at its best.

I am more than happen to buy into a lot of ridiculousness when it comes to horror comedy films. That doesn’t mean that I’m willing to accept anything for the sake of comedy. A film like Class of Nuke ‘Em High has all of the problems of a film like Rock ‘n’ Roll High School. What I mean is that it presents a world where the people, the situation, the setting, and everything else is so much of an extreme caricature that it doesn’t touch on reality. It’s not even parody. The people are ridiculous and stupid, miss the obvious, and only by the grace of a higher power haven’t stuck a fork in an outlet at this point.

Look, I’m not trying to be a jerk about this, but stupid people being stupid isn’t funny. When we’re given a nuclear power plant from which all of our problems will stem that is literally openly leaking green fluid into the water table and no one notices? When a student drinks that water and has green goo running down his mouth and just…shrugs it off? There’s stupid and then there’s stupid. What this lacks is anything like verisimilitude. These people are too stupid to survive in any world, and because of that, I don’t really care about them.

Regardless, the basic idea here is more or less obvious. There’s a nuclear plant a mile or so away from a high school. One group of students—all of whom would be booted from any school immediately but are naturally allowed to keep attending here—make money by selling weed grown outside the nuclear plant. Does anyone notice that the marijuana plants are literally growing in toxic runoff? Of course not.

Here’s the thing: Class of Nuke ‘Em High isn’t funny because it’s not smart enough to actually do anything unexpected or actually funny. It’s also not scary. So what else does it have to offer?

Honestly, not a lot. There’s some minor nudity here (none of which is very appealing, honestly) and some gross-out moments that are played for comedy because they are clearly not meant to be serious. Because this isn’t funny and isn’t scary, though, it fails on every front.

I compared this to Rock ‘N’ Roll High School above, and it does have a lot of the same qualities. What it doesn’t have, though, is a great soundtrack to cover up the fact that the movie isn’t very good. This should at least be fun or different or anything other than exactly what I predicted it would be. The jokes are dumb, the characters are dumber, and at 85 minutes, it still feels like it’s far too long for the one joke it essentially has.

Troma is capable of better. Even dumb comedies should have some standards.

Why to watch Class of Nuke ‘Em High: You know what you’re getting here.
Why not to watch: It’s not just low budget; it’s stupid.