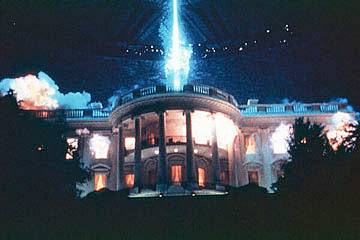 Hollywood is known for a number of things. While certainly (as this list generally proves) there are movies that come from Tinseltown that are thoughtful, intelligent, challenging, and well-made, that’s not the most people’s first thought. Hollywood means big budget, lots of explosions and action, and the lowest common denominator.

Thus we have Independence Day, a film stupid enough that I had a hard time believing it didn’t come from the scaly, brimstone-scented hands of Michael Bay. In this film, gigantic alien spacecraft enter Earth’s atmosphere, blow up a significant number of cities, and then are finally destroyed by a triumphant human population that deals with its devastation with grit, determination, and massive logical inconsistencies.

Rather than go into the ins and outs of the film itself, I’d rather discuss the massive inconsistencies, bad logic, stupidity, and plot holes that are foisted on a public that deserves a lot better. Watch Independence Day and you will discover the following:

The assistant to the president of the United States (Bill Pullman as that president) keeps her private cell phone number listed in the phone book “in case of emergencies.” Because the American public is generally well-behaved enough that she wouldn’t be inundated with prank phone calls at all hours of the day.

The best way to destroy any major city is to plant your alien spacecraft over a recognizable landmark and fire. It doesn’t really matter if it is in the center of the city or not—as long as it’s something people would know, it’ll work.

When you are a fighter pilot like Captain Steven Hiller (Will Smith) and watch your best friend (Harry Connick, Jr.) killed in action by aliens, it doesn’t really matter. You can still celebrate as long as you destroy one alien spacecraft at the cost of your own plane.

A human being is capable of knocking out an alien wearing full body armor with a punch to the head.

Cars left in traffic will keep the keys on the driver’s side visor.

Entry into top secret government facilities by a horde of civilians can be achieved by driving up in a pickup truck with one alien body. This allows entry for everybody in the entire procession.

The American government is willing to risk the president’s life on a suicide mission.

Everyone in the world speaks English, and is equally inspired by a single speech from the president of the U.S.

Alien life forms never improve their technology. A ship that crash lands on Earth in the 1950s will be completely similar to one that attacks 45 years later. Essentially, this would be like someone landing a P-51B Mustang on a modern aircraft carrier and having no one notice.

A pilot who flies modern aircraft is capable of flying alien spacecraft as long as he sees it in combat. This is the equivalent of my saying that I can compete in NASCAR because I’ve watched part of a race on television. Additionally, anyone who has flown any aircraft at all at any time in the past can be trained in less than one day to fly a modern jet. How different can they be?

If your parent loses faith, keep a Bible/Torah/Quran/other scripture on your person at all time so that if something else happens, you can immediately rekindle that faith.

Ultimately, this is a movie that trades specifically and singularly on its special effects. The characters in the film are not so much characters as archetypes who fill specific roles and have no real personality other than a couple of quirks and a specific role to play. Bill Pullman is the president, so he is young, noble, good-looking, and courageous. His wife (Mary McDonnell) is smart, educated, well-dressed, and noble. The guy who works at the cable station (Jeff Goldblum) is hyper-intelligent, caring, and decent, and his father (Judd Hirsch) is equally caring, smart, and filled with the wisdom of every old Jewish guy ever. The scientist from Area 51 (Brent Spiner) is stereotypically goofy and lacking in social skills.

Independence Day is an insult to the intelligence of anyone older than 15 with a brain that works even mildly. I can only surmise that it’s on this list because of the special effects, which really are good, particularly the explosions during the start of the alien war. However, since the release of this film, a number of other movies have been released that not only have special effects as good or better, but that are also far better films, less insultingly stupid. I can’t see how this film can be justified on this list when something like Jason and the Argonauts is ignored. Even an oddball sci-fi film like Serenity has decent effects without making me feel like Hollywood thinks I’m a dumbass. How about Spider-Man 2?

This is a big, dumb movie, and it should have never come anywhere close to being on this list. I feel stupider for having watched it again.

Why to watch Independence Day: Special effects that are still pretty good, even more than a dozen years later.
Why not to watch: This movie believes you are really, really stupid.
Posted by SJHoneywell at 11:06 PM