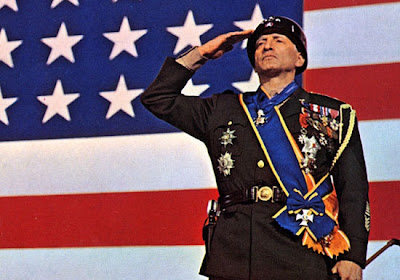 Is there anything more iconic than the first six minutes of Patton? Is there any pre-war speech short of the St. Crispin’s day speech from Henry V more prone to making a guy want to kick someone’s ass than Patton (George C. Scott) walking out onto that stage in front of that huge American flag and talking about murdering those “Hun bastards”? If there is, I haven’t come across it yet. Those six minutes set the stage for the next two hours and forty-five minutes of war, death, explosions, hell, and trouble. They also probably did more for Scott’s winning the Best Actor Oscar in 1970 than anything else in the film. It’s worth noting that most of what Scott says in that speech come from actual quotes said by Patton, and that many of them were watered down from what the man really said.

Patton, of course, is the story of General George S. Patton, one of the most successful and controversial personalities of World War II. The film does not cover his early life, his childhood, his education, or his early military career. Instead, it starts with Patton’s first command in northern Africa after the disastrous battle at Kasserine, following his battles through the war until its conclusion in Berlin.

In addition to being remembered as perhaps the greatest tank commander in American military history, Patton is best known for a couple of personality quirks. One is that he absolutely refused to retreat. His basic strategy was drive straight ahead at his opponent, grinding over them. He had no use for anyone he considered incompetent or a coward. He also firmly believed in reincarnation, and believed that he had lived many lifetimes previously, always as a soldier.

All of these aspects of Patton’s personality are brought out in the film. Most telling are his personality conflicts with British Field Marshal Montgomery (Michael Bates), who Patton considered a prima donna and less than competent. This comes to a head, at least initially, on Sicily in preparation for the invasion of Italy. Patton’s plan for a dual landing at Syracuse and Palermo was scrapped in favor of a plan that gave the potential for glory to Montgomery, leaving the American forces the bulk of the fighting.

Patton used the fact that Montgomery encountered stiff resistance to advance, cross the island, take Palermo anyway, and then rush along the coast to reach Messina before Montgomery. It was a huge personal victory for Patton, and the beginning of his personal war with Monty. It also caused friction between Patton and General Omar Bradley (Karl Malden). Bradley was forced to take his troops over mountain roads, and for Bradley, this tactic felt less about victory for the army and more about personal glory for Patton, an opinion further enhanced by Patton’s insistence on a risky amphibious landing to continue advancing.

The other iconic moment of Patton’s life and the movie is the slapping incident. While visiting a hospital during the battle on Sicily, Patton encounters a soldier suffering from what was called at the time shell shock. Unable to believe that combat fatigue/shell shock/PTSD was a real thing, Patton slapped the young soldier and called him a coward, and was forced to apologize for his actions. This happens right about at the mid-point of the film.

One thing I appreciate about this film is the fact that it doesn’t simply focus on Patton. We get both sides of the war here, frequently seeing briefings of the Afrikakorps. It is here that we get frequent insights into the nature and personality of Patton as well as those of Patton’s greatest historical enemy, Erwin Rommel (Karl Michael Vogler).

Assuming the film as relatively accurate in terms of Patton’s life and career, two things become evident in the watching. It is very easy to admire Patton the warrior and to look on him as something unique in the annals of warfare. It is also incredibly difficult to like the man. He’s a bastard, unrelenting and uncompromising. It’s far easier to like and respect a man like Bradley, who left personal glory aside and always had the best interests and lives of his men as his central focus.

Patton is a fascinating film with an equally fascinating history. I’m personally attracted to films on or about World War II mainly because I feel like it’s the last war we had a real reason to be in, the last one that felt entire justified on every possible level. Regardless of my personal convictions or your own, Patton is a tremendous film. While George C. Scott never claimed his Oscar, he earned it. Karl Malden earned one too, but wasn’t even nominated.

Why to watch Patton: They called Patton “Old Blood and Guts” for a reason.
Why not to watch: You’re a pacifist.
Posted by SJHoneywell at 5:30 PM