The Trouble with Noodles

Film: Once Upon a Time in America
Format: DVDs from NetFlix on laptop. 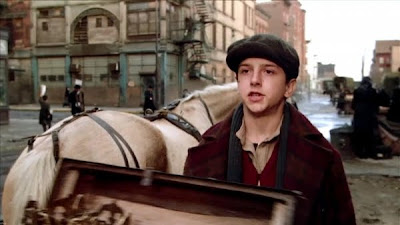 Sergio Leone didn’t do a lot of short films. Of all his films, perhaps the most controversial of these is Once Upon a Time in America. It’s not controversial because of the events of the film or the subject matter, but because of how it was released. Leone created a sprawling film of close to four hours length with his desired cut. The American distributor chopped the film down to almost half of this length. More severe, the American distribution removed the three separate timeline structure from the film and placed the remaining scenes in chronological order, ruining the slow reveal of the story.

Chopped to pieces, the movie is terrible. Placed in its proper order and at its proper length, this is a powerful and meaningful film that touches on themes of love, loss, loyalty, betrayal, and the integrity of criminals. It is a sprawling narrative, and it can be difficult to follow at times, but the film is absolutely worth the near four hours of screen time.

The film takes place in three main time periods. The first is the early 1920s during prohibition, when our main characters are children and young teens. The second is the mid-1930s, right around the end of prohibition. The final period is modern, roughly the mid-1960s, when the remaining surviving characters are much older.

In the ‘20s, we start with a gang of young boys in a predominantly Jewish neighborhood in New York. This group is led by David “Noodles” Aaronson (Scott Tiler). His underlings are Philip “Cockeye” Stein (Adrian Curran), notable for his mostly-closed right eye and ever-present panpipe; Patrick “Patsy” Goldberg, identifiable by his strangely beautiful eye color; and Dominic (Noah Moazezi), the smallest of the group. These four are friends with Fat Moe (Mike Monetti), whose father runs the local kosher restaurant, and whose sister Deborah (Jennifer Connelly) is the neighborhood beauty and the obsession of Noodles.

The boys work for a local gangster named Bugsy (James Russo) doing small chores like burning down the newsstand of a man who refuses to pay protection, and rolling drunks for their wallets and watches. They’re stopped from rolling a drunk by a newcomer named Max Bercovicz (Rusty Jacobs). He and Noodles face off against each other, but when both are robbed by the local cop on the beat, they resolve to be friends and form their own gang. Max becomes a co-leader with Noodles, and the two break away from Bugsy. This causes some problems for them, as both are severely beaten by Bugsy and his gang. Eventually, this culminates in Bugsy’s shooting of little Dominic and Noodles’s revenge, which leads to Noodles doing a dozen years in prison while the other three gang members expand their criminal empire. It also ends the first act of the film.

From here, we leap ahead to the ‘30s, and the release of Noodles (now played by Robert De Niro) from prison. While he was in, Max (James Woods), Cockeye (William Forsythe) and Patsy (James Hayden) have gone into the mortuary business. This is a front for their real business, bootleg liquor and running a speakeasy and a variety of criminal enterprises. Their prostitution ring is run by Peggy (Amy Ryder), a girl from the neighborhood who used to prostitute herself for sweets. Deborah (Elizabeth McGovern, who looks disturbingly like Jennifer Connelly) is still around, and there’s still something between her and Noodles.

This section of the film starts with a diamond heist at the behest of a man named Frankie Manoldi (Joe Pesci), who is doing the job as a favor to his brother Joe (Burt Young). What Joe doesn’t know is that as soon as the heist is complete, Max and the gang have agreed to eliminate him, also at Frankie’s behest. This bothers Noodles, since he doesn’t want to have to work for anyone.

Noodles tries to rekindle his relationship with Deborah, but she rebuffs him, telling him that she wants to get to the top, and she’s leaving for Hollywood. In response, he rapes her, then watches her leave on her train, something of a microcosm of Noodles’s life—if he can’t keep something, he destroys it. In typical Leone style, this is filmed as brutally as possible; it’s an uncomfortable scene and painful to watch.

The focus of the gang now turns to a labor union. A union leader named James Conway O’Donnell (Treat Williams) is fighting with the owners of a local factory, and his life is constantly threatened. When he police enter on the side of the scab workers, the gang reacts by switching his infant son in the hospital with a girl and threatening not to tell him where his son is unless he calls off his men. The war between the union leader and a corrupt businessman named Van Linden (Dutch Miller) ends with the death of Van Linden’s gang and the serious wounding of O’Donnell. O’Donnell’s lawyer tells Noodles and Max that prohibition is ending, and they should do something legitimate.

But neither Noodles nor Max wants to go legitimate, and instead comes up with a plan to rob the Federal Reserve Bank. Noodles doesn’t want to do it, figuring no one would make it out alive. To save his friends, Noodles tips the police to the robbery. His friends are killed anyway. Noodles flees, going to Buffalo.

Through these first two sections of the film, we constantly flash forward to the ‘60s and Noodles as an old man. He’s returned to the old neighborhood because of a backwards summons—the old graveyard is being dug up, and he is told that his three friends are not buried there anyway, so he doesn’t need to worry. Essentially, this tells him that someone knows who and where he is. For the rest, though, a spoiler warning is necessary.

In the present day of the film, Noodles discovers that his buddy Max didn’t really die, but changed his name and appearance. Max is now a senator named Bailey, who is being investigated for corruption. Max wants Noodles to kill him, because he doesn’t want to have to deal with the investigation. Noodles refuses because of the wasted 30 years of his own life spent in Buffalo dealing with intense guilt over the loss of his friends. Max leaves, and it is strongly suggested that he does himself in, although there really is no resolution.

However, the film ends in the 1930s around the time of the bank heist. Noodles, rather than being on the job, is in an opium den smoking and zoning out. Since opium (from reports, not personal experience here) produces intense and vivid hallucinations of past and possible future events, the implication is that everything after the failed heist may simply be the opium dream of Noodles. Additional evidence for this is the fact that Deborah ages very little—in the ‘60s, she looks almost the same as she did in the ‘30s. There are other hints as well—the cars that drive by the old Noodles are vintage cars from the 1930s, and the champagne bottles that fall from one of them are the same brand seen in all of the prohibition scenes.

Additionally, just before the end of Prohibition, we’re told that the last job pulled by the gang was done without Noodles, because he was zoned out in an opium den. We see this only at the start of the film and again at the end, implying virtually everything after the rape of Deborah came from the opium. At least that’s how I choose to see it.

I respect Leone’s vision, but this movie is damn long, probably too much so. There’s so much going on all the time, that I had a tendency to lose focus on it from time to time. I understand the problem with the bastardized two-hour version of the film, but I think there are a few minutes here and there that could be cut, bringing the film down to about three hours. This is very much Leone’s style though, long takes of people’s faces where the action is internal rather than on the screen.

Nonetheless, it is a great film. Anything of this size and scope is going to be either magnificent or terrible, and it certainly isn’t terrible. I do question the odd placement of the intermission, though. It comes at nearly the 3-hour mark in the film, leaving a shade over an hour for the finish. While it is probably the most sensible place in the story for the intermission, it does make the film feel lopsided. This is the main reason I’d like to see some cuts in the first part—the film feels top-heavy.

Why to watch Once Upon a Time in America: A brutal, vicious epic.
Why not to watch: Leone spends a lot of time with his camera implying rather than showing.
Posted by SJHoneywell at 8:21 PM

Email ThisBlogThis!Share to TwitterShare to FacebookShare to Pinterest
Labels: crime, drama, Once Upon a Time in America, Sergio Leone