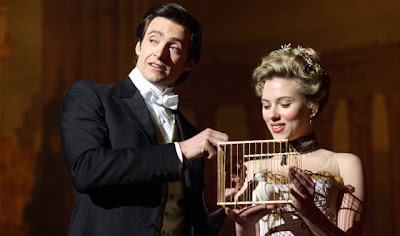 Magic is cool. I say this knowing that there are people who disagree, but they’re also wrong. Magic is cool. I’m not such a huge fan of the giant stage illusions—the big tricks that take 20 minutes to set up for a couple of seconds of wow factor. But a good magic trick is something special. For me, the fun is in trying to figure out the secret of how the trick is really done.

The Prestige is all about magic, and the magic of magic. A period piece, the film occurs in the late 19th century or the early 20th. Two up-and-coming magicians work behind the scenes for another magician named Milton (Ricky Jay, who is an impressive magician in his own right). The assistants are named Robert Angier (Hugh Jackman) and Alfred Borden (Christian Bale). Both are learning the trade of stagecraft and illusion, and Angier’s wife Julia (Piper Perabo) works as Milton’s assistant.

We learn almost immediately, in fact before we know about Milton, that Borden has presumably killed Angier over some long-running feud. He is in prison and awaiting trial when he is made an interesting offer. In exchange for the secrets to all of his tricks, including the one that made him famous, The Transported Man, his daughter will be taken care of instead of relegated to a workhouse and a terrible life.

We then get the story. Angier and Borden want Milton to do more with his act. In the course of this, Borden ties Julia’s hands too tightly, and she is unable to escape from a water tank. Julia drowns, and the feud between the two men begins. Angier wants to know what knot Borden tied, but Borden refuses to tell him, claiming not to know. Milton is ruined because of the accident, as is the man who creates his tricks, Cutter (Michael Caine).

Borden and Angier start their own acts, and proceed to do everything they can to ruin each other’s success. Angier contracts Cutter to work with him, and comes up with a startling new way to do an old trick. Borden destroys the trick on stage, ruining Angier’s run. Borden attempts the trick of catching a bullet, but makes the mistake of calling Angier on stage, who proceeds to shoot off two of his fingers.

Things get nastier when their women get in the middle of the conflict. On Borden’s side, it is his wife, Sarah (Rebecca Hall). For Angier, it is his new assistant and love interest, Olivia Wenscombe (Scarlett Johansson). Angier sends his assistant to work for Borden, hoping to steal the secret of his new trick, The Transported Man. Sarah, meanwhile, is convinced that her husband has fallen for this new girl and loves her only part of the time, loving both Olivia and his magic and secrets more.

All of this comes from that one trick. In it, Borden bounces a red rubber ball across the stage, then steps into a box on one end of the stage. Then, just as the ball reaches the far end of the stage, he emerges from a second box and catches the ball. Angier becomes obsessed with the trick, hoping to steal the secret, convinced that it must be more complicated than the double that Cutter tells him it is. In fact, Angier does perform the trick with a double for awhile until Borden destroys his reputation once again.

Ultimately, he gets hold of Borden’s diary and decodes it, believing that the key lies in a machine built for Borden by the scientist Nikola Tesla (David Bowie). Tesla agrees to help Angier decides to fund Tesla’s work, working through his intermediary, Alley (Andy Serkis). And we are thus lead back to the beginning with the death of Angier, as he performs the newest version of this same trick, and drowning in front of his greatest rival.

The actual plot here is really a lot more complicated than all of this. In fact, it’s the sort of film that requires a couple of thousand words to go through all of the various twists and turns the plot takes. In that respect, it’s pretty impressive. This film trades on its difficulty, demanding that the audience pay close attention to it at every moment. Miss a minute, miss the movie. And while I respect this, my disappointment in it is palpable, and best covered in a spoiler.

What we discover is two-fold. First, Angier’s trick really is a form of magic. Standing under Tesla’s giant device doesn’t teleport him, but produces an exact duplicate of himself elsewhere, a specific distance away. What this means is that every night, the man in the machine gets dropped into a water tank and is drowned—essentially, one version of Angier dies with each performance. Simultaneously, we discover that Borden’s trick is accomplished by virtue of his identical twin. This twin goes around disguised as Fallon, the man who makes the tricks. In fact, the two of them frequently switch places, spending a day as one personality or the other.

Okay. So I can, for the sake of the movie, buy into the idea that Tesla’s machine makes a clone. But why then is he so surprised to fall into the tank every night? He should know what’s coming. Second, all of Borden’s personal problems stem from the fact that he and his twin switch places every day or so—Sarah ends up killing herself because it was the wrong twin, the twin who didn’t love her, playing the role that night. Even if I accept the whole identical twin thing, who would consent to live that much of a charade? One twin could take the role of Fallon, undisguising himself only for the trick reveal. It sure as hell would have made their lives a lot less complicated.

Ultimately, the problem I have with The Prestige is not that it is unbelievable, but that the parts that are supposed to be believable don’t pass the sniff test. It’s certainly an inventive movie and the plot is complicated and intriguing. However, the characters act in ways that no people would act in that situation. For that, it’s a disappointment.

Why to watch The Prestige: A complicated, difficult plot.
Why not to watch: The resolution, after a couple of minutes of thought, is ludicrous.
Posted by SJHoneywell at 10:41 PM