Film: A Star is Born
Format: Streaming video from NetFlix on laptop 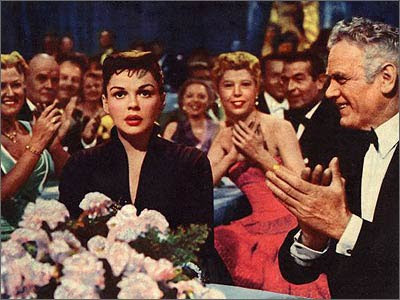 Ah, Judy Garland. It is the stock in trade of the entertainment business that such stories happen more than we may like. A person with enormous talent is, in the end, destroyed by that very talent that made him or her a star. This is a theme we will revisit when I watch La Vie en Rose about the life of Edith Piaf. But this is not the film of the day, which is a musical in a very different tradition from the norm. How fitting that the story is one that matches the life of its star in many ways.

A Star is Born features Judy Garland as the supremely unfortunately named Esther Blodgett (changed in the film to Vicki Lester). She’s a talent, as revealed in the first few minutes of the film in a performance on stage at a Hollywood benefit. Her act is nearly destroyed by the drunken entrance of a fading star named Norman Maine (James Mason), but Esther manages to turn this into an entrance that gets him an ovation.

Maine, once a matinee idol, is now a drunken has-been of the (name your own favorite drunken has-been) variety. After Esther saves his bacon, he realizes that his drinking is a problem and he needs to do something about it. He recognizes that Esther has talent and promises her a career in the movies, but loses her address, number and any way to contact her. Esther, having quit her act, is forced to take menial jobs to support herself, singing in commercials when she gets the chance. Much of this (and other parts) is shown in a sepia-toned montage that is surprisingly effective.

It’s in one of these commercials that Norman Maine hears that angelic voice once again, and tracks her down. He convinces his friend Oliver Niles (Charles Bickford) to give her a small role in a film. This changes once Niles hears her sing, and she gets a major role in a musical, which proves to be a whopping success, making her a bona fide star. She marries Maine in celebration.

But this is when tragedy strikes. She wins an Oscar, and a drunken Maine barrels up on stage, speaks wildly, and mistakenly slaps Esther (now Vicki) across the face. Realizing he has a problem, he checks himself into a drunk tank and sweats it out, but hops off the wagon when his former agent (Jack Libby) rides him for surviving on Vicki’s talent. What happens next is best left to spoilers.

Vicki tells Oliver that she will give up her career to nurse Norman back to health. He overhears the conversation and, realizing that giving up her stage life will kill her emotionally, he walks out into the ocean and drowns himself. Vicki is naturally despondent, but is convinced to return to show business when told that she is wasting the career that Norman died to save. At a gala benefit, not unlike the start of the movie, she introduces herself as “Mrs. Norman Maine” to wild applause.

*** A SPOILER RETIRES AND LIVES IN SECLUSION ***

One of the problems I tend to have with musicals is that they are so ready to push the happy ending on everybody that they strain the limits of believability and reality. A Star is Born does not do that at all. Instead, we get a real story that happens to have musical numbers in it that don’t do the whole “break with reality” thing so common and frustrating in many other musicals. What we get here instead is tragedy, reality, pain, and the angelic voice of Judy Garland.

Frequent readers are probably already tired of my complaining about my distaste for musicals, but it’s a distaste that’s at least honest. A Star is Born doesn’t rank in that list of films I dislike, because it holds together as a story and because the production numbers all make sense in the grand scheme of the film. I liked All That Jazz for the same reason. The musicals I dislike fail for me because they want me to buy into a world that I don’t believe in—a world where people break out into song and perfect choreography—or a world I don’t care about—where everyone is talented, on stage, sassy, and lives happily ever after.

A Star is Born works because the musical numbers, which are the real selling point of any musical, are secondary to the workings of Norman Maine and Esther/Vicki. It doesn’t hurt that I love James Mason (especially as a villain), and it doesn’t hurt that Judy Garland could sing anything handed to her and make it her own.

Is it too long? Probably. The big musical numbers really are big. “Born in a Trunk” goes on for what feels like the first half of the film. This isn’t to say it’s not worth watching, but it is the Energizer Bunny of musical numbers, and thankfully leads into the intermission. At roughly three hours running time, there’s a few places that might stand a trim. However, at that length, there isn’t a ton of fat here, particularly with the sepia montages. As per my penchant, I’d cut from the musical numbers.

Why to watch A Star is Born: Judy Garland at her best.
Why not to watch: This is not a happy musical.
Posted by SJHoneywell at 12:34 AM