It’s convenient and easy to think of life fifty, sixty, or seventy years ago was simpler time. I don’t think it’s true, but it most certainly was in the movies. Good guys were good guys and they were all good. The only vices they had was being too good. The bad guys were all bad, and the only good thing they could do was die. Good always won, evil always lost, and never, never, never were the American ideals compromised. 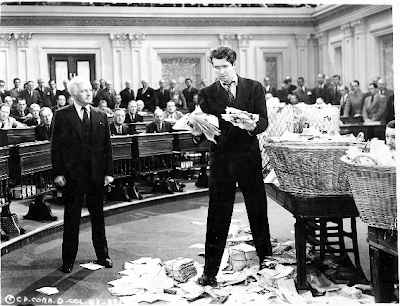 Much of that Hollywood revisionist history came from Frank Capra, which is where Mr. Smith Goes to Washington came from. It’s a good winning out over evil all the way. Mom and apple pie triumphant.

Here’s the pitch: A senator from an unnamed state dies. As it turns out, the senator was horribly corrupt, and was in the middle of a shady land deal that stood to make him, the leading businessman in his state, and a handful of others fabulously wealthy. A new lame duck senator is needed until the next election. Conferring with the equally corrupt senior senator from the state, Joseph Paine (Claude Rains) and shady business tycoon Jim Taylor (Edward Arnold), the governor appoints Jefferson Smith (James Stewart).

Smith is a pure bumpkin. He’s apple pie and America all the way; he can quote Washington and Lincoln, and runs an organization for wayward boys not unlike the Boy Scouts. He believes firmly in the American ideal, and believes equally that the men in government really do all they can for the little people, that they are true servants of the people and serve the highest ideals. In essence, he’s a good-hearted rube. This is in no small part because of his impression of Senator Paine, who happened to be the former partner of Smith’s father. Jeff Smith knows Paine only from the man’s idealistic days, and not his present corrupted self.

Smith is immediately surrounded by the cynical worst of Washington, most especially his new assistant, Saunders (Jean Arthur) and her press pal Diz Moore (Thomas Mitchell). Saunders isn’t keen to nursemaid a goof like Smith. He’s not helped by his sudden infatuation with Smith’s daughter Susan (Astrid Allwyn).

Smith, because he’s a naïve goof, the press initially has a field day with Smith, making him play the fool, because the press corps is as corrupt and jaded as it appears most of the senators are. Eventually, under the advice of Senator Paine, Smith pens a bill proposing a national summer camp for boys. Unfortunately for Jeff Smith, the plot of land he wants to use, Willet (sp?) Creek, is exactly the same spot being used for the shady land deal run by Senator Paine and Jim Taylor.

And that’s the story. Paine and Taylor do everything they can to discredit Smith, eventually trying to pin the land deal on him. Smith, and his group of wayward boys fight the rap, eventually leading to a massive filibuster of Smith against the entire rest of the Senate. Everything comes down to a couple of important moments, not the least of which is the Vice President recognizing Smith on the Senate floor to begin the filibuster.

This is a film that trades on the highest of high ideals, showing the little guy fighting against overwhelming odds, battling against corruption and maintaining his dignity against everything that can be thrown at him. It’s a little hard to stomach in these more jaded times. We live in a world where political divisiveness feels like it is tearing the country apart and that even young kids can’t hold to high ideals anymore. As such, seeing a grown man work himself into a lather over truth, justice, and the American way feels silly. And yet it’s also endearing and sweet.

What surprises me more than anything is that the film has not been remade. It seemed like a natural project for “liberal” Hollywood during the Bush years, and seems like a natural product for the conservative crowd now—pointing out what they see (or saw) as the corruption and graft at the highest levels of government. In fact, every day that goes by that a remake isn’t named, I wonder when that particular shoe will drop.

Mr. Smith Goes to Washington succeeds on the strength of its performances. Stewart, whether he believed in these ideals or not, sells it as the idealistic Smith. For that, and because it’s always nice to see good triumph over evil, the film will always be something special.

Why to watch Mr. Smith Goes to Washington: Makes one believe in Americana as reality.
Why not to watch: Because the reality is sadly different.
Posted by SJHoneywell at 11:56 PM