Film: The Birth of a Nation
Format: Streaming video from NetFlix on laptop 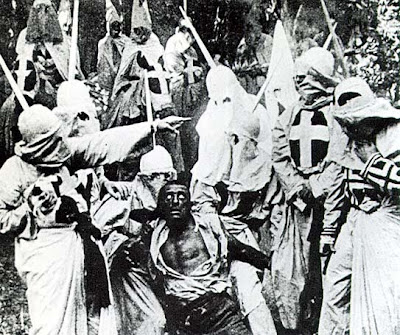 For me, there is no other possible way to watch this film, which is more or less a paean to the glorious days of the South when the lifestyle was fabulous for anyone white. The film yearns for those halcyon days of yore when the rich, white, benevolent plantation owners held sway, and even their slaves were happy in their servitude. Obviously, the connection here to reality is pretty tenuous at best.

And yet, that’s the film we’re given here. The South is praised in all things—the bucolic lifestyle, the traditions, the glory of the plantation system. Northerners in general are shown as slipshod, nasty, and petty while the men of the South are all gallant and noble and the women are all beautiful. Nothing here is more glorious than the flag of the Confederacy, which is covered in glory with each victory for the gallant, brave troops. Abolitionists are no better than…well, whatever you can think of (although Lincoln is thought of pretty well throughout).

And it gets worse. Since the film is based on a book called “The Clansmen,” it should come as no surprise that once the South loses that War of Northern Aggression, all hell really breaks loose in dear old Dixie. See, those terrible, terrible former slaves shouldn’t have really wanted their freedom, because all they’re really going to do is attempt to ravage the pure white women with their terrible, terrible jungle fury. Who can step in to save the day? The Klan, naturally.

Yes, the Klan. In Griffith’s masterpiece, the Klan are the good guys who seek only to avenge the terrible wrongs done to the South when those damned Yankees fought them for wanting to create their own country and for leaving the white population poor and helpless against all those rapacious black folk. It all feels so backwards—it did generally at the time it was made for many, although the film was a hit. But in this day and age, the morality of this film, the overall tenor of it feels so completely backwards and horrifying that the film is often difficult to watch. Anyone not lilywhite is nothing but a terrible, rampaging brute, little more than an animal, as are the white Northern soldiers who lead “Negro” regiments. In a battle early in the film, such a regiment destroys the town of some of the film’s main characters—looting and pillaging, destroying wantonly until the noble Confederacy rides into town to save the day and send those bad, bad men a’runnin’. In one title card, Griffith goes so far as to call the disenfranchisement of non-whites the Southerners’ “Aryan birthright.”

And so, The Birth of a Nation is unquestionably racist in the extreme. Griffith’s title cards throughout want to claim very much that the film is anti-war, and there are certainly sequences (the death of two friends, one a Confederate, the other a Yankee dying together on the battlefield, for example) drive home that point. But the real thrust of the film is that before the American Civil War, the plantation owners and Southern whites were benevolent rulers who held sway over their childlike slaves as a form of kindness. Without this oversight, says the film, the slaves would quickly destroy the land, lord their superior numbers over the white population, and continually exact revenge as well as release their rampant sexual desires for irresistible and pure white women.

Thus, the film must be separated from the art. The film itself, the actual plot and story, the characters and characterizations, the mood, and everything about it is completely reprehensible, particularly from a modern point of view. It is almost (not quite) but almost akin to blaming the Holocaust on the Jewish population of Europe. In this respect, The Birth of a Nation is a hateful, terrible film impossible to view dispassionately.

However, on the artistic side, beyond the story and the inherent racism of the film, it remains that Griffith was a master technician and a true innovator of the cinematic form. Scenes are filmed with a red filter to depict blazes around cities. He was one of the first, if not the first, to use a tracking camera for some shots. Griffith managed to blend documentary features (like the assassination of Lincoln) with a fictional narrative. He used close-up camera work to great effect.

Thus, on the level of historical importance to the growth of the film medium, there are few movies that wield this kind of impact. Griffith effectively created the film medium with this film in profound and significant ways. The film is still being studied for its effect on virtually everything that came after it.

So it’s art. Is it bad art or is it great art? That point is where people are still splitting the dog. Ultimately, which is more important—the invention and use of new and influential techniques in the cinematic medium or the reprehensible, vicious, and racist story it tells? It puts the viewer in the unique position of either denigrating one of the greatest technical achievements in early film or praising something about as politically correct as Mein Kampf.

So where do I fall? It is a great film. It’s an unpleasant, nasty film. It’s a film that will irritate and offend anyone who isn’t a skinhead. But regardless of this, its technical achievements mark it as a film that truly is worthy of study. It’s worth noting, though, that silent dramas are extremely tedious to watch (for me), and this one runs more than three hours.

Why to watch The Birth of a Nation: The most influential film for the first 30+ years of cinematic undertakings.
Why not to watch: Naked, ugly racism from stem to stern.
Posted by SJHoneywell at 8:10 PM

Email ThisBlogThis!Share to TwitterShare to FacebookShare to Pinterest
Labels: D.W. Griffith, epic, The Birth of a Nation, war