If you’re going to tell a story, you may as well tell a big story, and if you can tie it in to an even bigger story, so much the better. The typical Bible epic focuses on the lives of the people in the Bible, either Old Testament or New. There are a few other films that attempt to do the whole “sword and sandals” thing without much of the sword, and without much of the Jesus. As a case in point, we have Ben-Hur and Life of Brian.

Ben-Hur, of course, takes this story and itself quite seriously. The winner of the highest percentage of Academy Awards in history (it won 11 out of the 12 handed out that year), it is perhaps more than any other film objectively great. It tells the story of a wealthy Jewish prince named Judah Ben-Hur (Charlton Heston) and his life, which runs tangentially to that of Jesus Christ. In fact, the film opens with the birth of Christ, despite the fact that Jesus is, at best, a tertiary character here, and the actor who portrayed him, Claude Heater in his only film role, never shows his face and is uncredited.

At the beginning of the story, we are introduced to Messala (Stephen Boyd), the new tribune for the Jerusalem garrison. It turns out that he grew up in the area and always dreamed of running this outpost. He is quickly greeted by his old childhood friend, Judah Ben-Hur. However, this reunion soon turns sour. Judah wishes for freedom for his people, and balks when Messala asks him to help him destroyed the Jewish rebellion. This causes no end of trouble between the two. When a loose roof tile slides off Judah’s house, hitting the new governor, Judah is accused of attempted assassination and handed over to the slave galleys while his mother and sister are imprisoned, eventually becoming lepers. We get in the scene of Judah’s sentence, the essence of Messala, who tells Judah that he is condemning him simply because people knew they were friends. If he’s that quick to pass sentence on a friend, the people will fear him.

On the march to his new ship home, Judah is refused water until a mysterious stranger (obviously Jesus, even from the back) helps him. Once on the ship, he survives by hating the Romans. In a crucial battle, he saves the life of the Roman commander, Quintus Arrius (Jack Hawkins), who eventually befriends him and adopts him as a son and Roman citizen.

However, Judah wants revenge on Messala and journies back to Jerusalem. Along the way, he encounters one of the original three wise men, Balthazar (Finaly Currie) and an Arab sheik named Ilderim (Hugh Griffith). Judah agrees to race Ilderim’s chariot in the grand arena against Messala.

This is the real culmination of the film for me. The chariot race is truly something special, and despite the fact that this movie is a good 50 years old, this scene still holds up as one of the greatest ever filmed. The action is intense, particularly between Messala and Judah. Judah, of course, wins the race, and Messala is badly wounded when his chariot wheel flies off and he is trampled under the feet of another team. He dies of these wounds, but not before telling Judah of the fate of his mother and sister, now plagued with leprosy.

After this, the movie becomes quite a bit more moralistic, and dovetails back with the story of Christ. For my money, the film could have ended shortly after the chariot race, but what do I know? 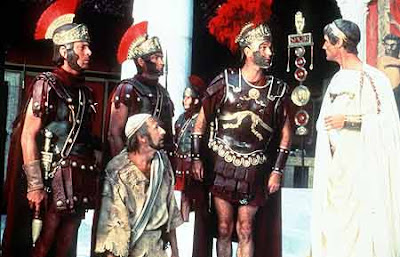 Life of Brian is the second film from the Monty Python team, a comedy group I almost literally grew up with. I’m a huge Python fan—I had a dog named Monty Python, and another named Basil Fawlty. Again, this movie runs parallel to the life of Christ, and is the tale of Brian (Graham Chapman), the baby born in the manger next to Jesus. Brian’s life parallels that of Christ in many ways, including his becoming a prophet and martyrdom on the cross.

The film, which should come as no surprise from anyone even vaguely familiar with the Python team, is a long gag. Brian finds himself in a variety of dangerous situations, all caused by drastic misunderstandings of the people around him. His mother (Terry Jones, also the director and team member) is constantly annoyed with him, and tells him that his father is a Roman named Naughtius Maximus, who raped her, at least at first.

Brian falls for Judith (Sue Jones-Davies), who is a member of the People’s Front of Judea, a radical organization that wishes to overthrow Roman rule, provided they can get anything out of committee. Asked to write “Romans go home” on the palace wall, Brian is caught, given a grammar lecture by a guard (John Cleese), and forced to paint the phrase on the wall 100 times. This, of course, gets him pursued further, causes him to get a ride on a spaceship, be captured, imprisoned by Pontius Pilate (Michael Palin), who has a terrible speech impediment, escape, become a reluctant prophet and messiah, be recaptured, and eventually crucified.

The entire Python team—Chapman, Cleese, Palin, Jones, Eric Idle, and Terry Gilliam (a hell of a director in his own right)—play numerous roles throughout the film, while Python regular Carol Cleveland has just a few bit roles.

There are things missing from this film in a big way. I love Gilliam’s weird little animation sequences, and except for the titles and the completely gratuitous alien spaceship sequence, there is no animation here. Additionally, there is almost too much story here for the Pythons. The Quest for the Holy Grail has a semblance of a story, but it also goes off the rails time and time again, which is where most of the fun comes from. Brian does not—it sticks to its main theme, with the comedy coming from the characters rather than the incomplete sketches and bizarre segues from one thing to the next.

Sadly, I think Brian is the least of the Python films. It’s gutsy and ballsy (coming allegedly from an offhand comment from Eric Idle. When asked what the team’s next film would be, he answered, “Jesus Christ: Lust for Glory”) and ambitious. It’s these qualities that put it on this list, and also make it far less funny than the other Python films. They push it pretty hard. There’s a lot of language and gratuitous male and female frontal nudity, not to mention the mocking of religion, belief, Christianity, Judaism, and just about everything else.

Recently, an American named Kim “Howard” Johnson, who was a Python fan and flew himself to Tunisia to work on the film, published his notes and diary from his time working on the film. It’s a gushing, sometimes fawning account of his five weeks with the team, but it’s also worth a read for any Python fan. I enjoyed the book and I enjoy the movie, but it’s almost never the Python I choose to watch.

Why to watch Ben-Hur: A real epic of the original mode and, of course, the chariot race.
Why not to watch: After the chariots, it turns maudlin.