Two in Every Deck

Ever since Adam West donned a cowl and tights, Batman has had a problem with camp. The original Batman television series was fun, silly, and campy—deliberately so. It couldn’t be taken seriously because it didn’t take itself seriously. Because of this, when the character first came to the big screen, there were some very large hurdles to overcome. 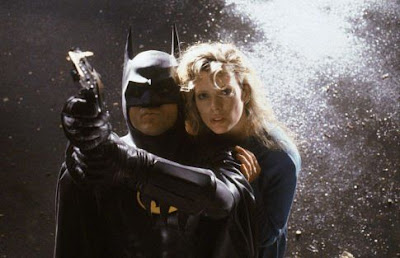 To be honest, Tim Burton didn’t overcome all of those hurdles. There’s plenty of Batman that begs to be taken seriously, but much cannot be, and a lot of this comes from the art direction of the film. It’s impossible to take Gotham City as a real place because it seems to exist in no real time period. The technology is all real and modern, but the look is something from an idealized 1930s or thereabout. Criminals all dress like Dick Tracy villains, for instance. The city is an art deco wonderland of massive architecture and sculptures. There’s no way to tell when this film might take place—Gotham exists in a bizarre twilight zone of old cars and modern technology. The architecture of the city is schizo-gothic, all gargoyles and giant evil machinery.

Chances are that you’ve already seen this film, but on the off chance you haven’t, Batman covers the origin of the superhero character and then his battle with the insidious Joker. The Batman is the alternate identity of billionaire playboy Bruce Wayne (Michael Keaton), who witnessed his parents being murdered when he was a child. In response, he became a creature of terror designed to frighten the criminal element.

We also get a mob war started by Jack Napier (Jack Nicholson), who works for crime boss Carl Grissom (Jack Palance). What Grissom doesn’t know is that Jack is two-timing him with Grissom’s girlfriend Alicia (Jerry Hall). Grissom takes revenge by setting Jack up at a heist in a chemical plant. During the course of the raid and the attempt to kill or capture Napier, Batman shows up and dumps him into a vat of chemicals (mirroring the origin story from the graphic novel The Killing Joke). Napier survives, becoming the Joker thanks to the extreme physical damage from the toxic sludge.

Throw into this a reporter named Knox (Robert Wuhl) and a photographer named Vicki Vale (Kim Bassinger). Both want to break the story on the Batman. Vale also manages to start a relationship with Bruce Wayne, who, thanks to his extracurricular activities as a dude in a cowl and cape, behaves very oddly.

In addition to the campiness, the film has some very strange issues. These are best handled under a spoiler warning, just in case you’re under 16 or live under a rock.

The biggest break with reality for me here is not the Joker’s face or the weird, campy elements of the film. I can accept those for what they are. What I have trouble with is Alfred (Michael Gough) bringing Vicki Vale into the Batcave while Bruce Wayne is sitting at his computer. Why the hell would Alfred blow Batman’s biggest secret, and do so with a journalist? Even more, once the two have a chance to talk, her reaction is to ask if they are going to try to continue a real relationship. Any human being in that situation would spend at least five minutes screaming, “Holy shit! You’re Batman!”

Another thing is this—at the end of the film, Batman and Vicki Vale are hanging off the roof of a building while the Joker dances above them like a madman. Anyone with even a little Batman knowledge—like the first 100 minutes of this film—knows enough to realize no one is in danger. He’s friggin’ Batman, and he falls off roofs all the time.

There are things I like here. The Joker’s main henchman, Bob (Tracey Walter) is great. He doesn’t do much and doesn’t have a lot of lines, but he’s fun to have on screen as a sort of constant presence. I also really like Michael Keaton in this role. There have been, in the movies, four distinct takes on the Batman/Bruce Wayne character. The current is the guttural and vicious version paired with the savvy playboy in the franchise reboot. Keaton’s Batman is good in a fight, but far less the unstoppable warrior. His take on Bruce Wayne is more interesting. As Wayne, Keaton comes off as a dilettante, a man with too much money and not enough sense or much ability to control that much cash. It’s an interesting idea for the character, and a good one.

Jack Nicholson as the Joker steals every scene he is in, which should come as no surprise. Part of the reason, if not the entire reason for casting him in the role is what he brings to it. Nicholson plays the Joker as a completely unhinged, surreal criminal. He’s Dadaism with legs and a purple coat.

The biggest complaint I have, though, is that for an action movie that really depends on the quality of the stunts and the fights, most of the fights are so dark that it’s impossible to tell what is happening. Someone should have informed Burton that more light in the fight sequences helps the audience to understand what is going on. 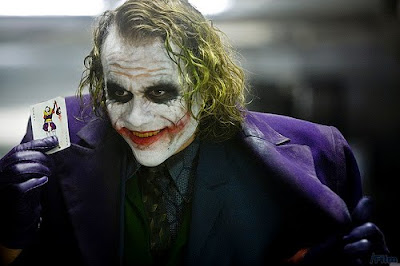 The rebooted Batman franchise brought us the fifth actor to legitimately play the role (Adam West, Michael Keaton, Val Kilmer, George Clooney, and now Christian Bale, assuming that you accept Adam West’s and George Clooney’s portrayals as “legitimate”). This is a much different incarnation of the Caped Crusader than the earlier versions.

The origin of this version of Batman is covered in Batman Begins, so we don’t rehash it here, which I appreciate. I get tired of watching origin stories over and over, so I’m pleased that there wasn’t one in this film. Additionally, in an interesting choice, there’s no origin story for the Joker (Heath Ledger) in this film. He simply exists. This is a very different Joker than in the first film. This one is not a guy freakishly burned by chemicals, but a man with terrible facial scars in the shape of a huge grin. The Joker makeup is obviously makeup, designed to look as if he’d been wearing it for a couple of days. It’s a great effect. He comes from nowhere, has no history, and no real story other than his own insanity. He gives two versions of how he got the scars, and neither one is likely to be the truth.

The Joker starts the film with a bank heist, and then takes on the Mob, offering to kill Batman for half of their money. They sort of accept, mostly because of the influence of Salvatore Maroni (Eric Roberts), and all hell breaks loose.

The Joker here calls himself an agent of chaos, and that’s what he is. There’s nothing he does here that makes a lot of sense except as a way to create anarchy, but it works well. Ledger’s performance is one of the great performances in film in the last 10 years, and arguably the greatest comic book film performance ever. He’s horribly disturbing, and it’s great to watch.

Another plus here is that all of the cast from the original film returned with one exception. This means Michael Caine as Alfred, Morgan Freeman as Lucius Fox, and Gary Oldman as Jim Gordon. This time we get Maggie Gyllenhaal as Rachael Dawes (instead of Katie Holmes). We also get Aaron Eckhart as Harvey Dent. All good.

All of this is great, but there are some issues here. For one thing, I disagreed with the PG-13 rating. I’m not sure the film deserves an R, but I can’t think of a 13-year-old I’d let see it. The Joker is really scary, and when Harvey Dent becomes Two-Face, his burns are absolutely horrifying. They’re nightmare-inducing.

The obvious question here is which of the two Joker adaptations is better. I prefer Ledger’s performance. It comes closer to the darker version of the Joker I prefer, and it feels very much like it’s entirely a unique vision—there is precedent for the way Nicholson performed the role, but Ledger’s version is its own thing.

As far as it goes, I understand why The Dark Knight was selected to be in the book. I’m not so sure about Burton’s Batman except possibly for the art direction. There are better superhero movies out there that should be included before it. Iron Man, Hellboy, Spider-Man, Spider-Man 2, and V for Vendetta are all better films, and all worthy of watching. Then again, I didn’t make the list, did I?

Why to watch Batman: Jack Nicholson.
Why not to watch: Camp overload.

Why to watch The Dark Knight: Batman the way he should be, and the Joker played to perfection.
Why not to watch: “Dark” describes more than just the superhero in this film.
Posted by SJHoneywell at 10:56 PM