When someone says the word “epic” in relation to a film, what do you think of? It’s a good bet that at least one of the movies you think of was directed by David Lean, who made his living directing long movies in exotic locations, which is more or less the hallmark of an epic. Certainly epics can be made in more prosaic (for American standards) locations, but generally speaking, the epic means the exotic—Africa, the South Pacific, India. If not that, then at least we get a sweeping story of grand change, war, revolt, and forbidden, doomed love. Think of epics, and you get Gone With the Wind, Braveheart, Lawrence of Arabia, and Ben-Hur. 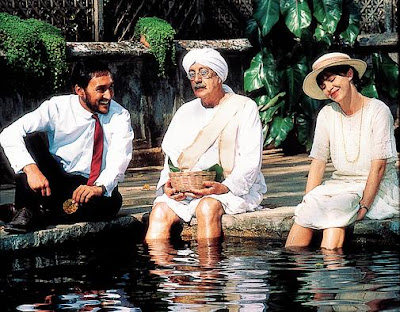 A Passage to India fits into that epic genre, but fits far less comfortably in my opinion than a lot of other movies. We do get, from the Western point of view, the exotic location of India. We also get epic length, in that the film stretches out to nearly three hours. That’s a David Lean hallmark. The movies he’s best known for are the type that come with an intermission in the middle.

What we don’t get here is a sweeping story. Instead, we get a very simple story that attempts very much to be about social change and social upheaval near the end of the British Raj, but doesn’t really live up to that promise. The story focuses on Adela Quested (Judy Davis), a vaguely pretty in that emotionless British way woman who is journeying to India to visit her fiancé, Ronny (Nigel Havers). Accompanying her is Mrs. Moore (Peggy Ashcroft), Ronny’s mother. Ronny is a magistrate, attempting to keep the local, British peace.

The two are shocked to discover that relations between the British and the Indian people have not progressed much. The two never really get together, and the British tend to live like royalty, treating the Indian population like servants or like they do not exist. We see this primarily in the character of Dr. Aziz (Victor Banerjee). Aziz both loves and hates the English. He appreciates their level of civilization, but detests the way he and his people are treated by the ruling class.

However, he appears to discover a kindred spirit in Mrs. Moore, who wanders into a mosque while Aziz is there. Initially taken aback by her presence, he quickly warms to her, as she appears to understand him both on a personal and cultural level. In short, she doesn’t act like the typical English dame, and Aziz is smitten with her personality. The two encounter each other again at a luncheon, where we are also introduced to two other major players: Dr. Godbole (Alec Guinness), an Indian professor, and Richard Fielding (James Fox), a local school superintendant. On a whim, Aziz invites the entire group for a picnic at the local point of interest, the Marabar Caves. Shortly after, Adela tells Ronny that she will not marry him.

It is here at the caves that things go south. Mrs. Moore becomes claustrophobic in the caves, but Aziz and Adela continue exploring. At one point, high on the side of the cliff, Aziz steps out of a cave for a cigarette, but when he goes back inside, Adela is gone. He sees her running down the cliff, bloody and distraught. He returns down to the ground and learns that Adela is accusing him of raping her, and he is jailed. The rest of the film concerns his trial, the “guilty until proven innocent” belief of the British nationals, and Mrs. Moore’s constant and consistent belief that Aziz is innocent. The interesting piece here, of course, is that Ronny is in the position of standing in judgment over the man who is accused of raping his on-again, off-again fiancée.

Aziz, of course, is innocent of the crime of which he is accused. This is the main thrust of the film; can an Indian national receive justice at the hand of a British magistrate in the British penal system? It’s a story that has been explored a number of different ways in a number of different cultures, and yet the story remains viable and worthwhile.

While the film is beautifully acted and shot, I can’t help but wish that there was more here. To me, an epic should involve massive changes of something. Other Lean films—Dr. Zhivago or Lawrence of Arabia come to mind—involve massive stories of social importance and often include huge changes in social structure. A Passage to India changes only a couple of people in the film while the main social climate doesn’t change at all.

I’ve said this before on another blog about this film, but it’s worth saying again; it feels very much like the scope of the film is wrong. I’d love a chance to re-edit the film and cut about an hour of it to get it down to something where the length feels more like it fits the scope of the story. There’s such a small story here that the grand sweep of the film seems too large. It’s not that the film is bad, just that it’s too much for the story that’s here.

Why to watch A Passage to India: The British being very, very British.
Why not to watch: Not enough story for the scope of the film.
Posted by SJHoneywell at 8:19 PM