What is a life worth? In the film The Third Man, Harry Lime (Orson Welles) asks this question directly to Holly Martins (Joseph Cotten). As the two are suspended high in the air in a gondola, Lime asks how much would Martins care if one of those dots stopped moving. Lime, in the film, is selling tainted medicine, not caring about the fate of the little moving dots. 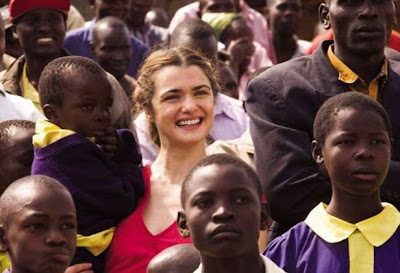 The Constant Gardener asks the same question, but does so by getting us up close and personal with a few of those moving dots, asking us then, now that we know them, how much are their lives worth, and how much do we care whether or not they are permitted to live. Our main player is a low-level British diplomat named Justin Quayle (Ralph Fiennes). He is married to Tessa (Rachel Weisz), a volunteer and activist. The two are stationed in Kenya where Justin works for the British government and Tessa gets involved in local affairs, particularly with a native doctor named Arnold Bluhm (Hubert Kounde).

Tessa and Arnold are off investigating something, but they don’t make it home. Tessa is found in a remote area with her driver, both brutalized and killed. Arnold is found several days later, tortured to death and crucified. The British government calls it the work of a random gang of bandits, but Justin does not believe it. He begins to investigate his wife’s death, coming up with an initial story that changes the deeper he digs.

It’s evident, for instance, that Tessa was having an affair with Arnold until it is revealed that Arnold was a homosexual. There is also evidence of Tessa having an affair with another local government bureaucrat named Sandy (Danny Huston), until this is revealed to be a plot of Tessa’s to get information. Throughout this part of the film, Justin struggles with the idea that Tessa may not have really loved him and may have simply married him as a way to get to Africa and into the work she wanted to pursue. It takes nearly half the film for him to determine the truth behind the strange statements she makes and the evidently scandalous letters she both wrote and received.

Ultimately, Justin discovers that what Tessa was working on was the effects of a new drug called Dypraxa. This new drug has been created to treat tuberculosis, and is being tested on the people of Kenya without their knowledge. Essentially, they must agree to take the medication if they also want to get any other medical treatment. Unfortunately for the company making the drug, it has serious side effects, like death, and these deaths have been covered up by removing the names of the victims from the drug trial records and burying the bodies in an unmarked mass grave.

At the center of the controversy is Sir Bernard Pellegrin (the great Bill Nighy), who stands to make an enormous amount of profit if Dypraxa is released to the world. As Justin continues to investigate, often with the help of other volunteer workers around the world, and in the specific from Tessa’s cousin Ham (Richard McCabe), Justin uncovers a terrible secret of altered trials, cover ups, and potential scandal. It is not until he tracks down the doctor who made Dypraxa, now doing penance for his work in the Sudan (Pete Postlethwaite) that Justin discovers exactly how deep and how far the conspiracy extends.

This is a film of two halves for me. I find the first half slow and not very interesting, although there are some affecting scenes. Just as Justin has come to realize Tessa’s love for him, he returns to their house in Chelsea, which holds many memories. The house is now in disrepair, and his reaction to his destroyed garden (and his destroyed life) is manic and understandable. It’s a painful moment, but a wonderfully acted one.

I enjoy the second half of the film very much. The conspiracy is interesting and smart, and Justin Quayle is smart in how he investigates the events surrounding Tessa’s death and the trials of Dypraxa.

It’s worth noting that I really dislike Rachel Weisz’s character in this film. I understand that she’s a crusader and trying to do something good for the world, but she is extremely abrasive and off-putting. And, while this is more meta than I usually get, since she won an Oscar for this film, she’s started to believe her own press. There was a time when Rachel Weisz would do a film like The Mummy, but those days are past, and I think that’s sad.

The Constant Gardener is a film that one hopes doesn’t reflect reality, since the reality that is reflected is bleak and terrible. The sad truth is that the reality is probably far worse.

EDIT: It's a bit before 7:00 on Saturday morning. I've just gotten home from my neighbor's house--he fell and couldn't get up, and another neighbor and I tried to help. We eventually called the paramedics, who got him up into his chair. I had a flashback to my mother-in-law, who used to fall all the time, usually at ungodly times of the morning. I'm telling you this, because it reminded me of something. I remember the first time I watched The Constant Gardener. It was when we packed up Sue's mom's apartment. So, as odd as it seems, this film is forever linked for me to wrapping glass candy dishes in newspaper and packing them in giant boxes. Odd how those things work, isn't it?

Why to watch The Constant Gardener: A great story that becomes an even greater, gripping story.
Why not to watch: The story here will piss you off if you have even the vestiges of a heart.
Posted by SJHoneywell at 7:32 PM