And Did Those Feet... 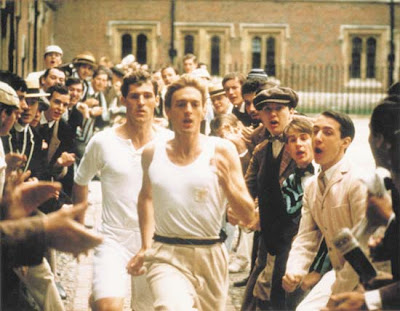 Certain movies stay with us for whatever reason. There are any number of movies I recall for any number of reasons. John Carpenter’s remake of The Thing, for instance, was the first time I got to watch a really scary R-rated film in the theater with my siblings, although not my first R movie at a theater. That was The Road Warrior. Raiders of the Lost Ark was the first time I thought I got more than my money’s worth. Octopussy was the first film I walked out on. Chariots of Fire was the first film I went to see on my own because I wanted to see it, and couldn’t find anyone to go with me.

Go figure that, right? Evidently, I was the only 13-year-old kid in my area who wanted to go see a film about really white British guys running as fast as they can in the years between the two World Wars. And yet, there I was, sitting in my local second-run theater, watching said film. I can’t say that I regret it, but in watching it again, I wonder what I was thinking, riding my little Schwinn and parking it on the bike rack out front. I was something of an Anglophile, though, thanks to my Monty Python addiction, so I tended to be pro-anything that was also pro-British.

The film is, as I stated above, about fast British guys running in what looks to modern eyes like the strangest track suits ever devised—knee-length shorts, collared shirts, and what looks to be the furthest thing from a pair of track shoes. Seriously, the things look a step away from wingtips, and not a full step.

Our two primary runners are Harold Abrahams (Ben Cross), a Jewish Cambridge student who feels as if the world is against him specifically because he is Jewish and Eric Liddell (Ian Charleson), a Scotsman and a former missionary in China who runs for the glory of God. The goal of both men is to reach the 1924 Olympic Games in Paris.

Their two stories are different, but manage to intertwine a few times. Abrahams makes a name for himself on the college circuit, running for Cambridge and winning everything he enters. His fame increases with each race, a fact that gets him a dinner date with Sybil Gordon (Alice Krige), an up-and-coming actress and singer, who doesn’t seem to mind much that he’s Jewish. Their romance begins to blossom just as Abrahams is taken down a peg by Liddell.

Liddell, on the other hand, is in constant conflict with his sister Jennie (Cheryl Campbell). Jennie believes that Eric is running for his own glory and is denying his commitment to God, the church, and most especially the family mission in China. Eric counters, telling her that while God may have created him for a purpose, God also created him fast for a purpose, and that purpose is to bring glory to His kingdom. In their first race against each other, Liddell wins, crushing Abrahams spiritually and emotionally. As a result, Abrahams hires Sam Mussabini (Ian Holm, who has evidently been about 60 for the last 30 years), the best professional athletic coach on the British Isles. This gets him in a little bit of trouble with the Cambridge higher-ups, which he probably rightfully takes as anti-Semitism.

Both men, as well as a number of Abrahams’s college mates, are selected for the Olympic team. What Liddell discovers is that the heats of the 100-yard dash, are to be held on a Sunday, and he refuses to run on what he considers a holy day.

Really, this is the central conflict of the film. Liddell refuses to run on Sunday regardless of the pressure being put on him. Moves are made to put him into a different race. A huge media blitz follows as the world appears to admire the young man’s resolve and fortitude of giving up his favored race to stay true to his own beliefs. Eventually, Liddell runs in a different race, a compromise made with a good half hour of the film to go.

The rest is just the running and the Vangelis soundtrack that became more famous than the film that spawned it. It is, in fact, difficult to see people running in slow motion on film without thinking of the famous “white guys running in slow motion” song from this film. Even now, nearly 30 years later, the song remains iconic, easily spoofed, and still more easily identifiable than the film itself.

It’s easy to call this film overrated, and perhaps it may well be thus. I’m not sure it really qualifies as a great film despite my youthful desire to see it. It is, however, a very good film and worth watching.

Why to watch Chariots of Fire: A good story and a memorable soundtrack to beat all.
Why not to watch: Slow motion white guys.
Posted by SJHoneywell at 11:21 PM