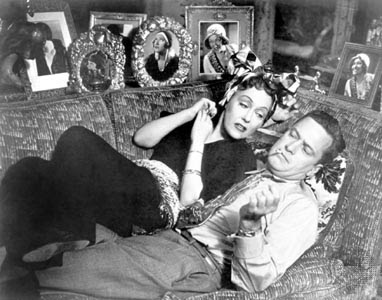 How does one react to genius? Is it to be scared of it? To revel in it? To let it roll over you and take it in? Sunset Blvd. is genius—start to finish, from one end to the other, the film is 110 minutes of pure genius. It’s tender, sweet, pathetic, and painful, tragic, and awful, and sad. People who say they don’t watch or can’t watch black and white films because they are boring or not interesting enough have not watched Sunset Blvd. It is rightfully considered one of the greatest films ever made, perhaps the greatest of Billy Wilder’s career—a career filled with some of the greatest films ever made.

One reason the film is so great is that it is perhaps the greatest skewering of Hollywood and the studio system until the release of The Player. Every aspect of the film business takes a beating in this film, from the writers through the faded, has-been stars. It doesn’t hide where it’s going to go from the beginning; we start with a body being fished out of a swimming pool.

The story is that of Joe Gillis (William Holden), a failed screenwriter on the verge of having his car repossessed and unable to sell a spec script or a story to be turned into a B-movie. The only thing he has working is a story that nobody wants, a fact revealed to in person by Betty Schaefer (Nancy Olson), a reader for Paramount. Chased by the repo men, Gillis pulls into the driveway of what he believes is an abandoned old house on Sunset.

As it turns out, the house isn’t so abandoned. It belongs to Norma Desmond (Gloria Swanson), who once upon a time was something in the film industry. Norma was a silent film star—one of the biggest—but has since retired from the film business to live in her giant, crumbling mansion with her manservant, Max (Erich von Stroeheim). In a mix-up of mistaken identity, Norma believes Joe has come about her recent tragedy. Her pet monkey has died, and she wants him placed in a casket and buried in her garden.

But Joe recognizes her, and remarks that he is a screenwriter. On hearing this, Norma perks up. She asks him to read part of a script she has been writing for her own return to the screen. For her subject, she has selected Salome, to be played by her, of course. Gillis reads the script, determines in voice over that it is absolute garbage, and tells her that she needs a rewrite. She’s willing, but only if he does it. She moves him into her house without his knowledge or permission, and treats him like a kept man—mainly because that’s what she wants more than a collaborator.

Joe doesn’t realize this until New Year’s Eve when Norma throws a lavish party. He assumes that the other guests will be her friends from her acting days: Anna Q. Nilsson, H.B. Warner, and Buster Keaton, all playing themselves. Instead, the party is just for the two of them, and Norma makes her play for Joe. He is disturbed by this turn of events and runs off to a friend’s house where he once again encounters Betty Schaefer. As it turns out, Betty is the fiancée of his friend (played by a surprisingly non-monotoned Jack Webb). She tells him that she discovered something in one of his stories that she thinks can be turned into a real script, but before this can to any further, he calls Norma’s house and discovers that she has attempted suicide.

Ultimately, Joe realizes that he is a kept man. Everything he has comes from Norma. When he meets up with Betty again, she tells him that she wants to write with him, and he demurs, unable to break away from Norma. Things become more intense when she finally packages off her cumbersome Salome script and sends it off to Cecil B. DeMille (playing himself). When she gets a series of calls from DeMille, she is convinced that the script is a hit, but it’s not the case; the studio just wants to rent her car, and DeMille doesn’t have the heart to tell her that her movie will never happen, and neither do Joe or Max.

In the meantime, Joe’s friend heads off to Arizona to work on a film, and Betty and Joe begin collaborating on that script…and slowly falling for each other.

It’s impossible for me to pinpoint what makes Sunset Blvd. work as a film, because everything about it works. Gloria Swanson is tragicomic as Norma Desmond. She is completely unaware that she is an aged film star and that no one cares about her any more. She spends her days answering fan mail, completely unaware that the letters have all been written by Max. She hears only what she wants to hear, does only what she wants to do, and convinces herself constantly that she is still young, still beautiful, still sought after, and still desirable.

More than anything, it is Swanson’s picture. The Norma Desmond character is so contrived, so artfully unaware of her obvious posing, that only a truly masterful actor could pull off such a role. The character goes deep, here. Swanson needed to play Norma over the top and terribly theatrical but subtly enough that we understand that Norma doesn’t realize she’s a caricature. As she slowly descends into madness, the changes are very slight and incremental, and all the more realistic and disturbing because of it.

This is a great picture—the best for virtually everyone involved. That takes into account a lot of great movies in a lot of great careers. It’s a heartbreaker and it still carries the weight it did when it was made. Unlike Norma Desmond, this film hasn’t aged a day.

Why to watch Sunset Blvd.: The greatest skewering of Hollywood ever created.
Why not to watch: Because you’re a moron.
Posted by SJHoneywell at 10:35 PM