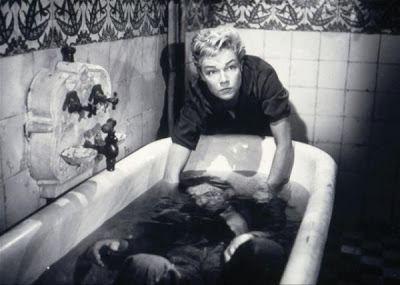 I disagree with the entry of some films on this list. That’s hardly a surprise with a list of this size, or any size. The only way I’d be able to have a perfect list is if I created it myself. Still, there are a number of pleasant surprises on the list—films I was excited to see make the list. There are still others that I would have been shocked to not see on the list. Such a film is the classic suspense drama Les Diaboliques, the masterpiece of Henri-Georges Clouzot, and a film that Alfred Hitchcock wished he could have made, at least by my reckoning.

What we have here is a tragic little domestic drama in a French boarding school. The school is owned by Christina Delassalle (Vera Clouzot, the wife of the director, in one of her three film roles ever). Christina is a kind soul who cares deeply for the children in her charge. She also has a serious heart condition, making her susceptible to severe shocks. Sadly for her, she has married very poorly. Her husband, Michel Delassalle (Paul Meurisse) is a complete villain. He’s domineering, abusive, and hateful. Worse for Christina, he is having an affair with Nicole Horner (Simone Signoret), one of the teachers at the school. And he’s just enough of a pig that he makes sure Christina knows of the affair.

Of course, things aren’t much better for Nicole. When the film opens, Nicole is wearing dark sunglasses to disguise the bruises from a beating administered by Michel. The two women console one another and hatch a desperate plan. They will trick him into leaving the school and kill him.

The plan is, if you will pardon the pun, diabolically simple. On a school break, the two women take the school car and drive to Nicole’s home away from the school. Once there, Christina calls Michel and tells him she wants a divorce. He arrives by train to confront her, and it appears that the two are on the verge of patching up their differences until he again becomes abusive, stiffening Christina’s resolve. He drinks several glasses of whiskey pre-drugged with a sedative. Once asleep, Nicole returns from establishing an alibi for the pair, and they drown him in the bathtub. The next morning, the two of them drag the body out in an enormous chest and return to the school, where they dump the body into the abandoned, unclean swimming pool.

Their thought is that eventually, the body will rise to the surface. When, after a few days it does not, Nicole arranges for a minor accident that necessitates the draining of the pool. When it is drained, they find…nothing. The body is gone. That same day, the suit Michel was wearing the night of his death returns from the cleaners. A body in the Seine turns out to be someone other than Michel; this episode brings in the attentions of a retired police commissioner named Alfred Fichet (Charles Vanel), who takes it upon himself to discover what has happened to M. Delassalle. Regardless of what the good commissioner might think, it is evident to the two women that something has happened. Nicole believes they are to be blackmailed, while the religious Christina is convinced that the disappearance of Michel’s body might have a higher, more sin-driven meaning.

Clouzot’s film works for a variety of reasons, but the largest and most important is that every scene is filled with a palpable tension. He holds the tension for as long as he possibly can, ramping up the discomfort of his characters as much as possible in each scene. For instance, when Christina goes to check on the body retrieved from the Seine, it takes a substantial amount of screen time for that body to come up the elevator and into the viewing room, and we see most of it. All that for a reveal that is essentially nothing—it’s the wrong body. Much of the tension in these scenes is created by Clouzot’s use of camera on Christina listening to the conversations of others, attempting to be stone-faced and failing.

Christina’s complete lack of a poker face is, in fact, one of the most effective parts of this film. A simple conversation between two people takes on entirely new meaning when viewed through the lens of her inner turmoil over the murder of her husband and the disappearance of the body. Her conflict goes from fear of committing a mortal sin to a fear of being discovered, and these tensions are revealed in her face at every moment. Additionally effective is the role reversal of Nicole, who starts as a battered mistress and quickly becomes the domineering and dominating leader of the relationship with Christina. Stern but supportive at first, she devolves into abusiveness and snide comments once the murder has been committed.

For all this, my favorite character in the film is Fichet. While I have no proof, he appears to be the basic inspiration for Peter Falk’s Columbo. Fichet appears to be a harmless old man, but he always has one more question, and is always at least twice as clever as anyone gives him credit for being. While we in the audience are spun on a merry-go-round, never knowing what to expect next, Fichet has all the answers, and has always had them. He just wants the proof and the confession to back up his hunches.

Les Diaboliques has one of the great endings in film history, and it is this more than anything else that makes this film feel like it should have been directed by Hitchcock. It almost was—the legend is that Hitch was a mere few hours late in attempting to buy the rights to the story, and the author penned something else for Hitch to adapt—a short story that turned into Vertigo.

Edit: Incidentally, you should really avoid the shitty remake with Sharon Stone and Chazz Palminteri.

Why to watch Les Diaboliques: More Hitchcock than Hitchcock.
Why not to watch: There is not a single reason in the world to avoid this film.
Posted by SJHoneywell at 11:50 PM