The Power of Christ Compels You 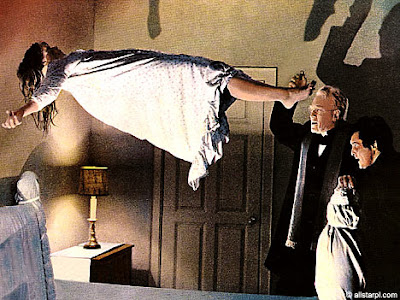 What is the scariest movie ever made? For my money, films that make the idea of going to sleep dangerous rank up there pretty high—A Nightmare on Elm Street and Invasion of the Body Snatchers thus are scary to my mind. As much as I enjoy zombie films, they also scare me pretty well, and are often nightmare inducing. I have a good (or bad, depending on your point of view) zombie dream at least once a month.

The Exorcist was so scary for its time that it was protested around the world. An uncut version of it was not available in the UK until as recently as a dozen years ago. Billy Graham went so far as to suggest that an actual demon existed in the celluloid of the print. And despite the fact that I love a good (or great) scary movie, up until tonight, I had never watched this film. I was far too young when it first came out, and just never got around to seeing it.

For me, it was more about how much I wanted to take. I like roller coasters, for instance, but there are some that I simply won’t go on. They’re just too much. The Exorcist was like that for me up until today. I’d always been scared not of the film, but of the idea of the film, of how scary other people said it was.

It’s a pretty straightforward film, for what it’s worth. A young girl is possessed by an evil spirit (Pazuzu according to various materials, although the name is never stated). At first, it is presumed her odd behavior comes from a lesion on her brain, but eventually, it is realized that what is happening is far beyond a human’s ability and in come the priests. All of this takes the bulk of the film—the exorcism itself doesn’t happen until the last quarter or so of the movie.

This film has become enmeshed in the vocabulary of film—the little girl’s head spinning around, swearing, and spitting pea soup, for instance, is a reference anyone can make whether or not he or she has seen the film. The girl is Regan MacNeil, famously played by Linda Blair. Her badly set upon mother, Chris (Ellen Burstyn) is a real force in this film despite all of the crazy antic of Linda, her various puppet doubles, and her voice double. She ages visibly in the film as the weight of what is happening presses down on her.

But aside from Linda Blair, the film really belongs to the priesthood. Father Karras (Jason Miller) is a young priest, doubting his faith. He is the initial priest who sees Regan. As a trained psychiatrist, he first recommends psychiatric treatment until he discovers that Regan is capable of impossible physical feats as well as speaking backwards. Karras acts as the assistant to Father Merrin (Max von Sydow), a priest who has performed exorcisms in the past. There is also a police lieutenant named Kinderman (the great Lee J. Cobb in one of his last roles), who is investigating the death of one of Chris MacNeil’s friends, presumably killed by Regan during one of her possessions.

Viewed in the right mindset, The Exorcist is plenty scary. The effects are still pretty good, even after coming up on 40 years, particularly the makeup effects. But as someone who doesn’t believe in demonic possession, I have to admit that I didn’t really find the film all that scary. Don’t get me wrong—I’m not going to let my kids watch it—but I’ve seen films that have scared me more on almost every level.

What it is, though, is excellently made and well cast throughout. However, I couldn’t help but think constantly throughout the film about what Linda Blair’s parents must have been thinking. My younger daughter acts. In fact, she’s doing a production of Miracle on 34th Street later this year. My older daughter is roughly the age of Linda Blair in this film. I can’t imagine okaying either of my girls to play this role, to say the things Linda Blair at least mouths, or to perform some of the more brutal and horrifying acts she is asked as an actress to perform. More than scaring me, I felt concern for the little girl under the makeup.

So it is a great movie, and for those of a more standard Christian mindset, a potentially terrifying and offensive one. All films, once they have started to age, exist really as two films: one film of the time in which it was made and one film in the present. The Exorcist has perhaps not aged as well as it could have. It still works, but so much has been built upon the ground it broke, that for those new to the film, it may be more of a letdown than the scarefest it was in the early 70s.

Why to watch The Exorcist: For its time, the most terrifying film ever made.
Why not to watch: You have no tolerance for supernatural scary stuff.
Posted by SJHoneywell at 11:43 PM