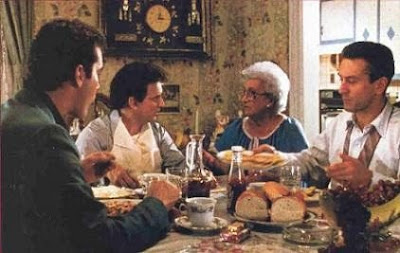 Certain movies become iconic almost immediately. They do something a new way, or touch a particular nerve. Whatever the reason, whatever the film, it immediately becomes recognizable and influences a dozen other films. It gets parodied, refined, copied, tweaked, and twisted. In the past two decades, perhaps nothing exemplifies this like Bullet Time from The Matrix. Another film that had this much of an impact is Scorsese’s Goodfellas. People can talk about The Godfather movies as being the greatest Mafia films ever made, and they well may be. But for my money, nothing did more for the allure and appeal of wiseguy culture than Goodfellas. Scarface is a bigger favorite in some communities, but it’s more drug culture than wiseguys.

This is the story—the Hollywoodized true story—of gangster Henry Hill (played by Ray Liotta), who joined up while still a kid. He worked his way up through the ranks, starting by parking cars and selling heisted cigarettes on street corners all the way up to major heists, drug trafficking, and performing hits on people as needed. Along the way, he works with Jimmy Conway (Robert De Niro), who is loved because he is generous with the vast amount of money he steals, and Tommy DeVito (Joe Pesci), who is completely out of his mind.

Hill’s life is in and out of prison, playing fast and loose not only with the law, but with the people he works for, Paul Cicero (Paul Sorvino) in particular. He cheats on his wife Karen (Lorraine Bracco) with a series of mistresses, deals vast amounts of cocaine, and ends up turning state’s evidence.

The movie is filled with iconic, memorable scenes. De Niro, naturally gets top billing. Liotta plays the film’s main narrator and main character. For all this, the truly iconic scenes all belong to Joe Pesci, who makes this film his, and picked up an Oscar for his troubles. Hell of a role, that—in many ways, it made Pesci who he became in the years following this film. The scenes with the kid Spider (Michael Imperioli), the “Am I a clown? Do I amuse you?” sequence, the dinner with his mother…this is Pesci’s film in every scene he’s in it.

For the time in which it was made, Goodfellas runs as close as it can to keeping an R rating without going beyond. According to legend, Scorsese had to remove 10 frames of blood to keep the R rating and avoid the dreaded NC-17.

For all the hype of this film, for all of the people who love it, it’s surprisingly intense. Perhaps the most noteworthy thing about the film, at least if you ask me, is how callously it treats the life and death of characters throughout. I suppose if I think about it long enough, it really isn’t surprising that guys who spend their whole lives perpetrating one crime after another wouldn’t be so terribly torn up about whacking someone who gets in their way, but it happens so quickly, so calmly, and with so little fanfare or problem afterwards that it’s like someone taking off a shirt or changing his socks. Frankly, I think this might be part of the appeal of the film, and for all of its moral shock value, I think it’s part of the reason that the film appeals to me as well.

I’m not going to say too much more about Goodfellas. You’ve seen it and were shocked and repulsed by it, you’ve seen it and loved it and don’t need to read my yammering about it, or you haven’t seen it and should. You fall into one of those three categories. Pick yours.

For what it’s worth, the best two parodies of this film are from Spielberg’s Animaniacs television show and the HBO sketch comedy series Mr. Show, which is where I got the name of this particular blog entry. Additionally, the vastly underrated My Blue Heaven with Steve Martin and Rick Moranis is based very loosely on Hill’s experience in witness protection. It’s funny, it’s sweet, and it’s worth a watch, too. In fact, it would make an oddly fitting and yet incredibly weird double feature.

Why to watch Goodfellas: The most complete wiseguy film ever made.
Why not to watch: It’s more violent than you remember.
Posted by SJHoneywell at 11:50 PM