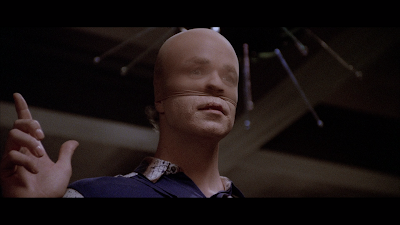 Sometimes plans don’t work out. My original plan for the night was to do a Hannibal Lector double feature—the original screen adaptation of the character as well as the most famous version of the character. Sadly, my VCR ate my tape of Silence of the Lambs immediately after I finished watching Manhunter. But we adapt, we change, we do something else instead. So rather than making today about Hannibal the Cannibal, I’ve decided instead to look at the weird and the offbeat.

Manhunter, as mentioned above, is the first film ever made featuring the character of Hannibal. This is not the character you are expecting if all you’ve seen is Silence of the Lambs. For starters, in this film, his name is spelled Lecktor. Second, and critical, is that in this film the bad doctor is played by noted actor Brian Cox, of whom I am a huge fan.

If you are a Hannibal fan, this is a story you’ve seen before, because it was remade as Red Dragon, which is also the name of the book the film is based on. It is, much like Silence, the story of an FBI agent trailing a serial killer and getting help from the depraved killer in prison. The agent here is William Graham (William Peterson), who is also the man who caught Lecktor in the first place. The case caused Graham to break with reality and retire from the Bureau. Graham’s specialty was (and to some extent still is) profiling. To profile killers, though, he needs to get deep inside their mind, essentially seeing what they see, and in some cases becoming what they become.

Graham is pulled from retirement by Jack Crawford (Dennis Farina), who needs help with a new serial killer. The killer is known by the FBI as the Tooth Fairy because he bites his victims. His victims are entire families, always cut down in a group during the full moon. Based on two crime scenes, the FBI knows quite a bit about the man (who is disturbingly played by Tom Noonan). They know he is very tall and blonde; they know his shoe size and his fascination with the lunar phase. What they don’t know is how he chooses his victims or where he will strike next.

Enlisted in finding the killer is a reporter for a National Enquirer-style paper called the Tattler. The reporter, played by Stephen Lang, is a creep and willing to do anything for a story. More important for Graham, the FBI discovers that the Tooth Fairy has been corresponding with Lecktor through the Tattler’s personal ads. To get the killer into the open, Graham feeds Lang false information, which leads to a terrifying confrontation between the reporter and the killer—one of the great scenes in the film.

While Graham and team become frustrated by the lack of movement on their case, the Tooth Fairy’s real identity—Francis Dollarhyde—has a change in his own life. While on the one hand he believes himself to be becoming something more than he was through his killings, he also finds someone who he believes can make him happy. This is Reba McClane (Joan Allen), who works at the same film processing studio he does, despite her being blind. Francis connects with her, but also feels betrayed by her, and puts her into his sites just as Graham begins to understand precisely what motivates the man.

It’s a good story. The real selling point, though, is a very different take on the Hannibal character. Cox isn’t in the film much, but he casts a long shadow over it. We gain terrific insight into the man when he uses his one phone call a week to discover the home address of Graham and his family, and then sends an encrypted message to the Tooth Fairy telling him to find and destroy Graham’s wife and son. He is a very different take on the character than is Anthony Hopkins’s version. Cox’s Lecktor is cold and calculating. He is filled with equal parts feigned innocence and malice disguised by concern. It’s such a different take that his version was overwhelmed by that of Hopkins in later films. 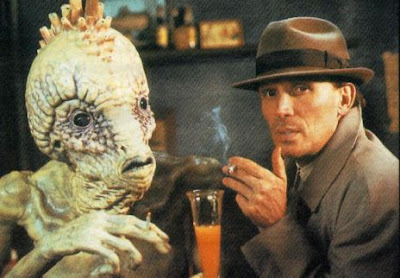 As for Naked Lunch, you tell me. The book it is loosely based on, or at least named after, was thought to be unfilmable until David Cronenberg attempted it. He evidently found it unfilmable as well and included several other books by Burroughs as well as aspects of Burroughs’s real life into something that is less a narrative and more an two-hour long fever dream of hallucination.

Bill Lee (Peter Weller) is an exterminator whose wife Joan (Judy Davis) has become addicted to the bug powder he uses to kill roaches. Bill himself is showing signs of addiction to the bug powder himself and begins to have significant hallucinations that center around gigantic bugs, many of which manifest themselves as bug-machine hybrids.

One day, Lee comes home to find his wife having sex with one of his friends while another friend reads droning poetry. Lee has been instructed by one of his hallucinatory giant bugs to kill his wife (and to make it…tasty…), so he shoots her in the head while playing “William Tell.” He flees, at least in his mind, to a place called Interzone, which is also the headquarters of an organization called Interzone Incorporated.

It seems that Lee is an agent for the bugs, and has been sent to Interzone to write reports on his typewriter, which is also a giant bug, and also his contact for the agency he works for. However, in the real world, it turns out that he has been mailing his “reports” to one of his friends, who has shown it to a publisher, who wants to publish it under the name of Naked Lunch. Along the way, Lee also encounters Dr. Benway (Roy Scheider), who might be a doctor and might also be in charge of a drug running conspiracy, shipping a drug called “black meat” made from gigantic Brazilian aquatic centipedes. He encounters Joan Frost, who is a dead ringer (no pun intended) for his dead wife. This Joan is married to Tom Frost (Ian Holm), who might be an Interzone agent, or could be just a hallucination.

The film is both real and unreal, existing in the real world as well as the vaguely Arabic Interzone of Bill Lee’s subconscious mind. I don’t get it. I’m also not sure if I like it. This is the second time I’ve watched this film, and just like the first time, it gave me a headache that required multiple ibuprofen to conquer.

I can’t make it make sense. I defy anyone to—even Cronenberg.

Why to watch Manhunter: The original take on Hannibal Lec(k)t(o)r.
Why not to watch: Thirty minutes of Inna-Gadda-Da-Vita.