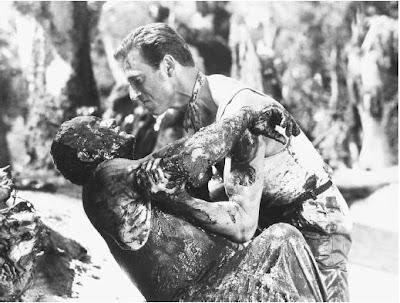 Real tension is difficult to create in a film, I think. I’m not a filmmaker, so I could well be wrong on that, but based on the number of movies I have seen in which tension is supposed to be ratcheted up and isn’t, I’d guess it’s more difficult than it looks. Hitchcock was a master of creating tension. Evidently, based on the films of his that I’ve seen, Henri-Georges Clouzot was a master of it as well.

La Salaire de la Peur (The Wages of Fear) is perhaps the most intense film I have seen this year. The plot is simple, the characters unexceptional, and yet this film is difficult to watch sitting still. Through the second half of the film, almost every frame holds the potential for destruction completely out of the blue. A single wrong move by the characters, a bad break, or a single tiny misstep holds with it not the threat but the promise of complete devastation. Every scene is a breath holding moment.

We start in a little town somewhere in South America—my guess based on some of the geography mentioned is that it’s in Venezuela. The town is the perfect location for nothing good—it’s inaccessible except by air for the most part. The only thing in the area is oil, and this is controlled by an evil American corporation straight out of central casting.

A number of foreigners have ended up in this dead-end town, and all of them have learned the central problem with their new location. There’s no work. The only possibility of a job is from the Southern Oil Company (SOC), and they aren’t hiring. The only way out of the town is by air, and the tickets are expensive. So, without money and without prospects, these foreigners end up hanging around the local saloon doing nothing but complaining and wishing they could get away.

Prominent among these men is Mario (Yves Montand). He’s a good-looking Frenchman who is having a fling with the pretty but clingy and vacant Linda (Vera Clouzot). Mario lives with Luigi (Folco Lulli). Luigi has a job and is saving up his money to go back to Italy since he, like everyone else, wants nothing more than to get out of this town.

Into this mix walks Jo (Charles Vanel), who walks the walk and talks the talk of a man to be taken seriously. He’s an older man with a history of criminal behavior, particularly bootlegging, but has fallen on harder times. Outrunning the law, he wound up in this nowhere, and now like the other foreigners, he’s stuck. However, because he likes to come off as important, he acts as a bully, setting himself apart from the other men in the area. He bonds quickly with Mario, since both are Frenchmen, and the two immediately make enemies of the other expatriates.

And then there is the possibility of escape, at least for four of the men. One of the SOC oil fields has suffered an accident and is now on fire. The only way to stop the blaze is to coordinate an explosion to cut off the supply of fuel. The only explosive available is a cache of nitroglycerine, which needs to be transported by truck across 300 miles of terribly maintained, bumpy, dangerous roads. The SOC is unable to use its own employees for this task—the union would never allow it. Instead, they offer the job to the foreigners with the chance at $2,000 cash for a successful run. That’s enough money to get out of the town and start a new life somewhere else.

But it’s more fun than that, of course. The trucks that will be carrying the nitro aren’t designed for the purpose. They don’t have special shocks or padding. They’re just standard trucks, and the nitro is in standard jerry cans. What this means is that a single bad bump will cause the nitro, the truck, and the men inside to go up like a Roman candle. Desperate, a number of men apply for the job anyway. While it’s almost certain death, it’s also a way out or a way home.

Four men are selected: Mario, Luigi, an intense Dutchman named Bimba (Peter van Eyck), and an old man named Smerloff (Jo Dest). Jo, upset that he wasn’t chosen, argues his way in by saying that if one of the four doesn’t show up, he’ll take their place. Naturally, this is exactly what happens—Smerloff doesn’t appear the next morning, and the implication is that Jo may have killed him for the chance at the money.

The second half of the film—a bit more than an hour—is the drive. Mario and Jo ride in the big truck and leave half an hour before Luigi and Bimba in the small truck. The gap is for safety. If one truck goes up in a fiery burst, the other should be far enough away to avoid the problem. Of course, the two trucks manage to cross paths frequently as one catches up to the other.

What becomes evident as the film progresses is that Jo, once a daring bootlegger, has lost his nerve completely. He is too cautious, unable to force himself to take a single chance at anything. This becomes very evident when the pair reaches a stretch of road known as “The Washboard” where a speed of at least 40mph is required to avoid significant bouncing. Jo can’t do it, trying instead to convince Mario that they two should drive the 30-mile section at dead slow.

This is all that happens for the rest of the film. The men drive, encounter problems on the road, and reveal their true selves and motivations as death sits literally behind every curve and bump in the road. Every frame of the film from the moment the first truck leaves contains with it the possibility of a massive explosion and instant death for the men inside it. As problems mount up and the trucks encounter danger after danger and close call after close call, the tension becomes a palpable thing, almost a character in and of itself.

I never thought I’d say what I’m about to say. Had you asked me a month ago about Henri-Georges Clouzot, I’d have said that Les Diaboliques was the best thing he ever did. Now, I’m not so sure. I still love that film, and called it Clouzot’s masterpiece less than two weeks ago. Today, I think I spoke too soon. La Salaire de la Peur is not just Clouzot’s arrival on the international film scene, it’s one of the most nerve-wracking, most intense films ever made.

I’ll say only this otherwise—the ending is difficult to stomach. I’m not saying it’s a bad ending or an inappropriate ending, but it does leave the viewer (at least this viewer) with a hollow place in the soul. I won’t spoil it here, not even under a spoiler warning, because this film is far too good and far too memorable to risk spoiling for anyone. But…damn!

Why to watch Le Salaire de la Peur: One of the tensest, most gripping dramas ever.
Why not to watch: A whiskey-tango-foxtrot ending.
Posted by SJHoneywell at 10:30 AM