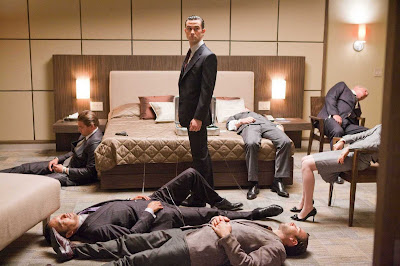 As I did with Avatar, I’m guessing here. I’m guessing that Inception will eventually make this list and it will do so long before I am done with the list. I rarely see movies in theaters because there’s usually someone in the theater with me who angers me—cell phones, talking, etc. It’s also difficult (and expensive) to find a babysitter. And, honestly, there aren’t a lot of movies worth spending the money on when I can just be patient and wait for it to come to a home format. However, I heard nothing but good about Inception. I was also contacted out of the blue by a friend, so we decided to go.

I’ve seen a whopping three movies in the theater this year, or about one every quarter: Avatar, Iron Man 2, and now Inception. The film has a one-in-three chance of being the best thing I’ve seen in a theater this year, and as it turns out, it is. Inception is a film that requires careful attention. It’s a film made for people willing to pay attention to it. In fact, it requires paying attention to follow, making it exactly the kind of movie I like seeing in the theater. The audience had to sit and watch the thing—no cell phone rings, no noise, no talking. In short, it was a great experience. Even better, my friend Tim and I spent a good half hour talking about what it all meant at the end.

Even better, what writer-director Christopher Nolan has done here is create a movie that absolutely cannot be spoiled. For me to spoil this film, I’d need a good 20 minutes and probably a beer, or at least a decent martini.

Here’s the set-up: a man named Cobb (Leonardo DiCaprio) has the ability to enter the dreams of other people. Once inside their dreams, he can extract information from them—safe combinations, corporate secrets, you name it. The dream world functions in many ways like the real world—it has (generally) realistic physics, for instance. The world of the dream is created by Cobb and his team, but is populated by the target with projections of their own subconscious mind. Cobb and his partner Arthur (Joseph Gordon-Levitt) are performing this operation on a Japanese businessman named Saito (Ken Watanabe), and we learn that what happens in the first chunk of the film is actually Saito’s dream. In fact, it’s a dream inside a dream.

Saito is actually trying to hire Cobb, because what he wants is something that allegedly can’t be done. He wants Cobb to implant an idea—this process is called “inception”—into the mind of a business competitor. Ultimately, he wants the idea to feel natural to the target, which requires getting deep into the target’s subconscious and attempting to make this implanted idea feel like the target came up with it on his own. In this case, the target is Robert Fischer (Cillian Murphy), the son of a dying energy magnate named Maurice Fischer (Pete Postlethwaite).

To do the job, Cobb, Arthur, and Saito assemble a team. They hire an architect named Ariadne (Ellen Page), a pharmacist named Yusuf (Dileep Rao), and a thief named Eames (Tom Hardy) and set up a situation that will give them 10 hours inside Fischer’s mind. Complicating all of this is the fact that Cobb’s wife (Marion Cotillard) is dead, and frequently shows up whenever Cobb is inside someone’s mind—and Cobb has issues with her death and in seeing both her and their children.

It’s actually even more complicated than this, but these are the basics. Cobb’s father is played by Michael Caine, who evidently has a rider on his studio contracts that he must appear in every damn movie ever made. Also showing up here is Tom Berenger as Maurice Fischer’s right-hand-man/Robert Fischer’s godfather.

Because once inside Fischer’s head the agents must dive into successive layers of subconscious, the film takes place in a variety of dream states, each one level deeper than the next. Fortunately for the viewer, these layers are easily distinguishable—a cityscape, a hotel, a military prison/hospital in an arctic waste, and a ruined world—and are thus easy to keep straight. One of the selling points is the hotel. Because the physics of the worlds above them affect the dream world anyone is in, sudden shifts in gravity work their way down. So, in the long climactic scene, as the van the characters are in on one dream level falls off a bridge, gravity is suspended the next level down, leading to an amazing sequence of zero-gravity fighting and movement that looks like The Matrix on acid.

In short, Inception requires the audience to think on multiple levels at all times. It’s a film that requires its viewers to determine if they are in the dream state, and decide which level of dream state they are in all the time. It’s a movie that doesn’t talk down to the audience, but invites them instead to think upwardly, to buy into the dream on the screen and engage both emotionally and mentally throughout.

Nolan is a smart filmmaker, and a smarter writer. Inception is damn good, has a cast that really buys into it, and sells the premise at every moment. It doesn’t hurt that two of my favorite actors—Ken Watanabe and Cillian Murphy—are here, too.

A worthwhile watch made better because of the worthwhile and interesting conversations it leads to once the film stops rolling.

Why to watch Inception: Anything that gets people to use their grey matter is a good thing.
Why not to watch: You want only bread and circuses.
Posted by SJHoneywell at 9:50 AM