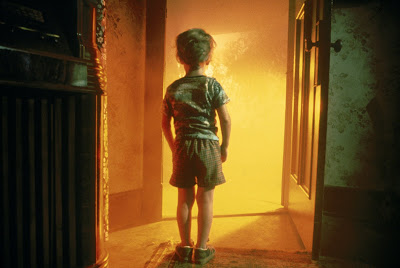 Everyone has specific movies that are important to them for one reason or another. Movies that we watch at a particular time in our lives or at a specific age become films that define not only who we are, but how we react to other films, stories, and media. Everyone has these films or television shows, or books. One of those films for me is Close Encounters of the Third Kind.

Is it one of the greatest films ever made? Perhaps. It’s not specifically one of my favorite movies of all time, but it certainly had a lasting impact on me and on the films that I tend to like. For my money, it has all of the aspects of films that I truly love. There’s enough scary to keep me interested and there’s a classic science fiction element that keeps me riveted in my seat. I saw this film originally when it was released in the theater just a couple of weeks after I turned 10, and about half a year after I saw Star Wars. And I was hooked, and still am on science fiction.

Traditional science fiction films depict aliens that visit Earth as terrible conquerors, or at least something that needs to be battled against. Close Encounters does the exact opposite of this, positing instead that the aliens are unknowable and mysterious, but not specifically hostile or dangerous. This mystery, though, does ramp up the scare factor.

It starts strangely, with the discovery of the airplanes from Flight 19, a famous training flight that vanished in the Bermuda Triangle in 1945. Among those discovering the planes are David Laughlin (Bob Balaban) and Claude Lacombe (influential director Francois Truffaut). Later in the film, this pair and others also discover a missing ship in the middle of the Gobi Desert.

On a more domestic front, parts of Indiana and Ohio are plagued by alien sightings. In particular, the home of Jillian Guiler (Melinda Dillon) suffers through a fly-by that turns on all of the electronic equipment. Jillian’s young son Barry (Cary Guffey) runs out of the house because of the lights, but he’s not scared. He’s attracted to them. At the same time, Roy Neary (Richard Dreyfuss), who works for the electric company, has an encounter with alien spacecraft of his own. These folks meet when Roy chases the mysterious lights and almost runs down Barry with his truck.

After this encounter, Roy and Jillian are plagued by visions of a large mountain-like structure, as well as a series of five musical tones. Roy begins to see the shape everywhere, and his obsession with the things in the sky above him cause him to lose his job as well as his relationship with his wife (Terri Garr) and kids. Another encounter with the aliens causes Barry to walk out of his house and vanish.

When a news story breaks about a terrible nerve gas leak in Wyoming, Roy, Jillian, and evidently dozens of others see what they’ve had visions of: Devil’s Tower in Wyoming. The government converges on the site, the scientists converge on the site, and so do dozens of ordinary people, compelled by the vision of the site in their heads. And for better or worse, something else is converging on Devil’s Tower as well.

Close Encounters has a subtle magic to it. It’s actually a fairly slow movie in many ways. Only a few scenes really have anything happening, and the end of the film goes on for a very long time with some very long shots.

While there’s a lot to love here, it’s the vision here that I love most. There’s something very special about a film that manages to take a fairly standard fiction trope (aliens visiting our planet) and does something original and unique with it. It’s happy science fiction; it’s optimistic rather than defeatist or pessimistic. The evil here comes from our own government, which is a common theme with Spielberg.

It’s worth noting that at this point in his career, despite the fact that he had only a couple of films under his belt, he was able to convince no less a luminary than Francois Truffaut to not only appear in his film, but appear in a major, significant role. I like Truffaut’s films, and I like him here. He seems like such a sweet guy. Whether that’s the role or the man, I find him to be a positive presence in this film, and it would be much less without him.

Close Encounters is all about the mystery and all about the wonder. The last scene lasts forever, and the film is good enough that you’ll never notice that the scene doesn’t change and the set doesn’t change for a good half hour or so. That’s masterful filmmaking. The suspense continues to build until it can no longer be contained, and everything is finally revealed in some of the most memorable and important sequences in science fiction film history.

Why to watch Close Encounters of the Third Kind: Science fiction as good as it can be without all of the dystopia.
Why not to watch: Well, there’s that whole lack of dystopia thing.
Posted by SJHoneywell at 11:19 PM