Where Your Eyes Don't Go 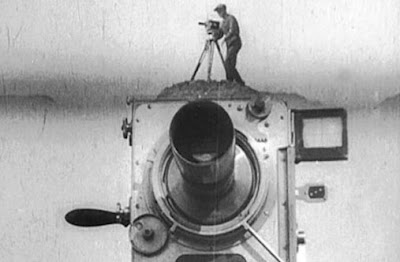 Often, when I watch a film, particularly for this blog, I multi-task. I’ve made dinner while watching something on the laptop, for instance. I’ve also used a film to act as an excuse to fold laundry. Last night was a variation on that theme: I watched Chelovek s Kinoapparatom (The Man with the Movie Camera) while ironing. Ironing is new for me, which means it takes me awhile to get it done, and a movie seems like the right thing to do.

This is not a typical film, however. Director/producer/etc. Dziga Vertov (who started life as Dennis Kaufman) wanted to do something entirely new with film. Doing something new was, at least in terms of innovation, easier in 1929 when film was still a new medium. For his innovation, Vertov decided to essentially follow the path of a day in cities like Moscow and Kiev, and that is the extent of his story. There are no characters, no actors, no sets, no story, and no title cards. In fact, the only thing like a title card that appears here is the translation of written items that are filmed.

Vertov does more than just film what he sees, though. This is undoubtedly the most heavily edited and altered silent film ever made. Vertov uses every trick he can muster. Scenes appear in fast and slow motion, there is stop-motion animation, frames slow and speed up as we watch them, freezing for a moment and then running again. Parts of the film run backwards, allowing a pair of men to start with a jumble of chess pieces and end with a perfectly set board. Images are superimposed on each other, showing workers at the center of their machinery. Vertov also frequently uses a horizontal split screen, showing two crowd scenes or street scenes, one on top of the other.

As there is no story or plot here, what the audience is left with is the images, both individually and in series. Many of the images are beautiful while others (a woman giving birth, several women nude from the waist up) are mildly shocking for a 1929 audience. Others are used to extol the glories of the Soviet state. We get, for instance, many shots of workers and machinery, often sped to the extreme, demonstrating the great productivity of the Soviet worker. We also get a number of shots of attractive and fit Soviet youth participating in various track and field events—tossing a javelin, running hurdles, and more.

Or are we? It could possibly be argued that the factory scenes in particular aren’t extolling much virtue, but instead reducing the workers to the level of the machine, where only productivity matters and placing another label on another package is more important than the person him- or herself. In fact, one of the opening scenes shows a city coming to life in the morning. Many of those people coming to life appear to be street vagrants, sleeping on benches or on sidewalks—hardly the sort of image that speaks to a benevolent state.

The most impressive part of this film, at least the version that I watched, is the accompanying score. The version I watched uses a score created and performed by the Alloy Orchestra, in part using the notes and directions of the score Vertov wanted. This is a tremendous effort—the music is appropriate and fascinating, and performed here with such quality that I can’t imagine it being handled by another group. In fact, as I type this, some of that music is running through my head. It is impossible for me now to separate this film from this soundtrack—and I don’t think I’d want to if I could.

The film I am most reminded of here is Koyaanisqatsi. It would not surprise me if I learned that Godfrey Reggio studied Vertov’s work when creating his own film. The juxtaposition of images and ideas leads me to believe that the one is the natural son of the other.

Ultimately, Chelovek s Kinoapparatom is engaging and interesting, but not the sort of film I’d like to have as a steady diet. I’m pleased to have seen it, and would watch it again, but not for a long, long time.

Why to watch Chelovek s Kinoapparatom: Innovation and history
Why not to watch: No plot, no characters, no nothing.
Posted by SJHoneywell at 9:18 PM