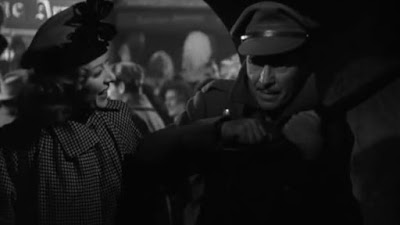 Melodrama has fallen out of favor. Okay, that’s kind of misleading. Melodrama fell out of favor a long, long time ago, but there was a time when movie dramas could almost always be counted on to be highly melodramatic. Take a star-crossed romance, a case of amnesia multiplied by two, and a love that apparently worth living in constant pain for, and you’ve got all of the makings of a melodrama for the ages. In this case, that melodrama is called Random Harvest.

A man called John Smith (Ronald Colman) is living in an asylum in England. He’s in the asylum because he has returned from the First World War shell shocked and without his memory. The shell shock has also made him self-conscious and virtually unable to speak. On the night of the armistice, “Smith” wanders out of the asylum because the guards are too busy celebrating to keep track of him. He’s more or less lost and terrified, and is taken in by a woman calling herself Paula (Greer Garson—the character’s real name is Margaret), which is really just her stage name. She realizes “Smithy” is harmless and decides to add him to the traveling troupe. Eventually, the pair run off and get married.

The two are happy together for a few years, and John Smith starts a career writing for magazines. After a couple of years, he’s contacted by a magazine publisher in Liverpool who wants to hire him. He goes to meet with them, but is struck a glancing blow by a taxi. This accident restores his memory of his earlier life but completely erases the last three years. So, John Smith is completely gone, replaced by Charles Rainier, heir to a fading fortune. His memories of Paula/Margaret appear gone forever, with her not knowing what has happened to her vanished husband.

Reunited with his family, Charles takes over the business and puts it on a paying basis again. He also attracts the attention of Kitty (Susan Peters, who was nominated in a Supporting role), the step-daughter of one of his siblings. Despite the massive age difference between the two, romance blooms slowly. In fact, the passage of time here occurs through Kitty’s letters. She writes once she graduates from high school (she’s 15 when this romance starts) and writes again when she graduates from college. And eventually, the two are set to be married.

However, there’s a monkey in this wrench. Paula/Margaret, seeing a picture of Charles Rainier and realizing that he’s her long lost husband, has managed to get a job with his company and is his personal secretary even though she’s had “John Smith” declared legally dead. So, she’s eternally near the man she loves more than anything in the world and unable to let him know who she is or what they once meant to each other. Can you hear the violins yet? Wait—it gets better. Kitty realizes that he’s pining for someone else even if he doesn’t know it himself and bails on the wedding. And then Charles is elected to Parliament. Realizing that his position will be more secure if he’s a married man, he proposes a marriage of convenience to Margaret who accepts. So now she’s again legally married to the man she loves despite his not remembering that he once loved her.

Okay, so the plot is pretty extreme with the pathos. In less capable hands than those of Mervyn LeRoy, it would be a mushy mess of emotions. It also benefits from three solid performances, those of Ronald Colman, Greer Garson, and Susan Peters. This is normally where I would comment on the lack of a nomination for Garson. However, 1942 was well past the time when actors received multiple nominations in the same year, and Garson was nominated (and won) for Mrs. Miniver, which was the better choice for a nomination anyway.

Even with LeRoy’s capable direction and the good work of the three leads, Random Harvest is pretty glurgy. It can’t help but be mushy and overly emotional based on the plot. It’s Greer Garson who ends up bearing the brunt of this, of course, and she soldiers on with what she has to do as best as she can. One can imagine a great deal of sighing that might normally happen in a situation like this. While there are tears now and then, Garson manages to handle this with the minimum of syrup.

Other than the obvious emotional pandering, the biggest issue is the age of the characters. Colman was over fifty during the filming, and while that’s age-appropriate for the latter half of the film, he looks far too old in the beginning to be believable. Greer Garson has the opposite problem. She looks the right age in the beginning but despite losing her husband (oh, and a child who evidently dies for an unexplained reason) she hasn’t aged a day 12 years later. Susan Peters was a good 30 years younger than Ronald Colman, making their romance downright creepy, especially since it starts when she’s playing a 15-year-old.

I understand the appeal of Random Harvest for a certain mindset. I don’t generally love melodramas, but I’ll admit that this one, despite how extreme the story is, is better than most. I can only imagine what Douglas Sirk could’ve done with this screenplay, though.

Why to watch Random Harvest: Nice performances from Ronald Colman, Susan Peters, and Greer Garson.
Why not to watch: Could there be anything more melodramatic?