You Never Forget Your First Girl 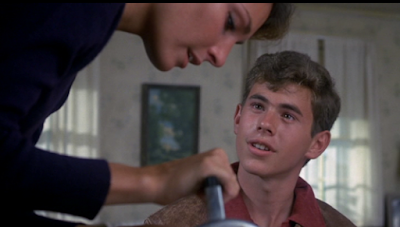 Every time watch a coming-of-age story, I seem to end up talking about the same thing. There are really only two coming-of-age stories in the world evidently. Either the protagonist learns about death because someone close dies or the protagonist learns about sex. Usually, the story for a guy is the death story. When a guy comes of age in the movie, it’s about confronting his own mortality. For women, it’s usually the sex story. Coming of age for a woman is about coming to terms with her ability to create new life. It changes up now and then, though. Sex comedies, for instance, tend to be about guys coming of age through sex. And so we have Summer of ‘42, which is going to be that sort of film.

Hermie (Gary Grimes) is 15 and spending the summer with his family on a beach in New England. His friends Oscy (Jerry Houser) and Benjie (Oliver Conant) are there as well. Like most 15-year-old boys, the trio is obsessed with girls and the idea of sex. They don’t really know what sex is (although Benjie steals a book from the house his family is staying in), but they’re obsessed with it nonetheless. For Hermie, things change when he encounters Dorothy (Jennifer O’Neill) a young bride who is living on the island with her husband.

Shortly after that meeting, Dorothy’s husband goes back to the war and Hermie continues to obsess over her, much to the consternation of Oscy and Benjie. Hermie manufactures some reasons to be around her—helping with groceries and moving boxes for her in the house and he endures quite a bit of teasing at the hands of Oscy as a result. Meanwhile the three boys meet up with girls their own age at the movies. Oscy takes charge and essentially claims Miriam (the oddly-named Christopher Norris), pairs Hermie up with the bookish Aggie (Katherine Allentuck), and sticks Benjie with the overweight and braces-wearing Gloria (who is completely uncredited).

During the movie (Now, Voyager), Oscy and Miriam hit it off while Hermie, convinced that he’s fondling Aggie’s breast, spends the movie instead fondling her arm. The four make plans for toasting marshmallows on the beach the next night, which leads to a scene where Hermie spends 10 minutes trying to buy condoms from the local druggist, one of the better comic scenes of its decade. That night, Oscy discovers that Miriam is far more sexually advanced than he thought, and both Aggie and Hermie are disturbed by the scene of the two of them having sex.

Hermie, though, is still caught up in his dreams of Dorothy and continues to make plans to see her. Their relationship changes when Dorothy is informed of the death of her husband in combat and seeks something like comfort in the arms of Hermie.

There’s a lot going on in Summer of ‘42 for a film that is essentially about a young man discovering sex. As should be the case, emotions run in all different directions at all times in the film. For Hermie and his friends, the desire to learn something about sex overrides everything, and they veer from anger to joy to embarrassment at a moment’s notice. It’s very real in that respect, and the screenplay doesn’t attempt to make this anything other than what it is—boys with their hormones running amok and trying not to let anyone else know it.

As mentioned above, the scene in the drugstore is played beautifully. It’s a huge chunk of the film’s running time, and it builds tremendously. There’s a moment when I thought it was going to veer into joke territory, but it avoids this well. Instead, the scene plays entirely off Hermie’s embarrassment to be purchasing condoms and the druggist’s complete lack of embarrassment at Hermie’s predicament.

And then, of course, there’s the sex that essentially ends the story. Honestly, the only word for it is “tasteful.” It’s very tender and sad, and director Robert Mulligan handles the scene with a great deal of class and emotional awareness. Even the lack of soundtrack is an impressive choice. Gary Grimes handles the scene in a way beyond his years (like Hermie, he was 15 when the film was made). Post-coital Hermie is amazingly conflicted—joyous at the actual culmination of having sex, terrified by what has happened, and yet terribly understanding of the grief that is affecting Dorothy. There’s joy and guilt and shame all rolled into this poor kid, and the whole thing is handled with a single line from Dorothy and a single response from Hermie.

I admit that I get tired of the entire coming-of-age genre. It takes a special film for me to actually care about them these days because at some level I feel like they’re all the same, or at least one of two flavors. Summer of ‘42 hits every note perfectly, though. It even ends beautifully, with Oscy trying as best he can to understand what Hermie has gone through but still wanting details of what happened with Dorothy, not knowing that her husband was killed in the war.

This is a special film, because it does what so many other films want to do and can’t. It almost perfectly feels like what it is to be a sex-obsessed kid trying to understand what life is about and blundering into life face first.

Why to watch Summer of ‘42: One of the better screenplays of the last five decades.
Why not to watch: It’s a big bundle of emotions going in every direction at once.