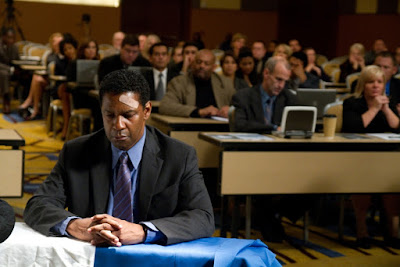 There was a time when Denzel Washington could do no wrong. He’s always been good, able to handle an action film or a straight drama as the film needed, and while not all of his movies are good ones, he’s generally pretty watchable at worst and magnetic at best. And while I like a few of his movies from the last decade or so, his “great performance/movie” output seemed to have dwindled. Flight, then, is something of a return to form.

I can only imagine that the impetus for the screenplay started with the incident of US Airways flight 1549, landed by pilot Chesley “Sully” Sullenberger on the Hudson River in 2009. By all accounts, Sullenberger was a magnificent pilot and something of a boy scout. Flight takes the premise of a miraculous airplane landing but posits the question of what might happen if the heroic pilot was quite a bit less of a straight shooter than Sullenberger.

Thus we have William “Whip” Whitaker (Denzel Washington), who is a very good pilot, but is also a drunk and a frequent user of cocaine. The night before the flight that will take over the bulk of the film is spent on a booze, drug, and sex-filled romp with flight attendant Katerina Marquez (Nadine Velazquez). A little booze and coke in the morning, and they’re off to their morning flight into Atlanta.

Meanwhile, we also meet Nicole (Kelly Reilly), who is also strung out on a variety of drugs. We see a little of Kelly’s life including an overdose. Yes, this will all become relevant.

Anyway, on Whitaker’s flight, a mechanical problem sends the plane into a steep dive. Co-pilot Ken Evans (Brian Geraghty) panics, but Whitaker, despite having downed three mini bottles of vodka during the flight, keeps his cool. He inverts the plane to level it off and clear populated areas, then rights the plane and forces a landing in an open field. The landing is mainly a success: 96 of the 102 people on board survive the flight. Four of the passengers and two crew members including Katerina are killed.

And then the investigation begins. What we have are two competing narratives. First is the fact that Whitaker’s piloting feat was the accomplishment of a truly magnificent and experience pilot. In fact, his lawyer Hugh Lang (Don Cheadle) tells him that ten experienced pilots in simulators attempted to recreate the event and in each case they dropped the plane and killed everyone on board. But, on the other hand, Whitaker’s blood alcohol level tested at three times the legal driving limit after the crash.

Whitaker meets Nicole while both are in the hospital recovering from their respective ordeals. Her overdose serves as a wake-up call for Nicole but Whip simply can’t stop drinking. They spend some time together at a farm that Whip inherited from his parents, but eventually Nicole leaves because she wants to stay clean and Whip evidently has no desire to do anything but continue to drink himself to death as quickly as possible.

There’s a lot more here, but Flight is mainly a character study of Whip Whitaker, or at least a character study of his alcoholism. His drinking and drug problems have controlled his entire life, causing his divorce and creating a rift between him and his son (Justin Martin). It seems to have created a rift between him and everyone else, even those who want to support him. His friend Charlie Anderson (Bruce Greenwood), who is also his union rep can’t get through to him. In fact, only childhood friend Harling Mays (John Goodman) seems to be able to do much for Whip, and most of what he does is supply him with booze and coke.

Denzel Washington tends to play good guys. Sure, he’s done some villain roles (American Gangster, Training Day), but they’re not where he butters his bread. Whip Whitaker isn’t a villain, though. He’s simply a very troubled man who has let his personal demons ride him like he’s a rented horse. I don’t know that he’s played someone this tortured before. Whitaker isn’t someone to hate, but someone to pity, and that emotion feels strange attached to Denzel Washington. But he wears it well.

Is there a downside to this film? Yes. I’m already a terrible passenger on airplanes because I get claustrophobic. The idea that my pilot might be upright only because the cocaine is counteracting the alcohol is absolutely terrifying to me.

Seriously, though, Flight is probably a one-and-done film for me, but not because it’s of average or lesser quality. The opposite is true. It’s one of Washington’s best performances in a career fairly carpeted in great performances. But it’s so raw and emotionally painful. Whip Whitaker is the textbook definition of a tragic character—a man who could be great and who in this one instance did a truly great thing, but who cannot escape his own inner demons to achieve true greatness. It’s a film I’m glad to have seen even if the experience wasn’t an enjoyable one.

Why to watch Flight: Denzel Washington reminds us of why he defined a generation of actors.
Why not to watch: How much do you trust your pilot?