My Day with Woody 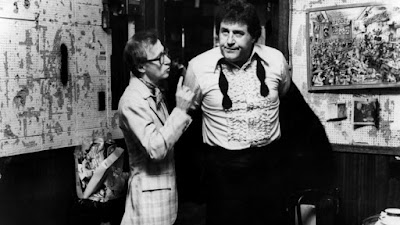 I tend to like Woody Allen. I’m not always sure why I like his films, but I often do. Allen isn’t always great, but he often is, and often is at least entertaining. When his writing is on, there are few people that can match him. I’ve liked almost every one of his films that I’ve seen. His dramas are tremendous and when his comedies are clicking, he’s among the best there is. In fact, one of Allen’s biggest problems is often Allen’s nebbish-y performance.

Broadway Danny Rose begins with the conceit that the entire story is going to be told in flashback as a story being told by a third-party observer. A number of old vaudeville-style and club performers are sitting around a New York deli discussing their pasts and the people they’ve known in the business. Eventually, the topic turns to former performer and eventual agent Danny Rose (Woody Allen). The men swap stories about him for a few moments until one says he’s got the ultimate Danny Rose story. This story will be the basis for the film.

Danny Rose has one thing going for him as an agent: he never gives up on his clients. Danny will stick with one of his acts through thick and thin, believing in them every step of the way. This generally means that the acts he represents are the bottom of the barrel in terms of talent and marketability. He mentions a blind xylophonist, a one-armed juggler, and a one-legged tap dancer among other acts. The one act he has with a little steam is singer Lou Canova (Nick Apollo Forte). Lou had a hit with a novelty song in the ‘50s but has since fallen on hard times. But Danny believes in him and is doing everything he can to get him back to the top.

Lou’s luck starts to change when a nostalgia craze hits. After a great deal of work, Danny manages to get Lou a club date where Milton Berle (playing himself) will be in the audience. Berle is looking to do a nostalgia-based television special and needs an opening act for himself as well, and Lou Canova is in the running.

The problem is Lou’s personal life. He drinks too much and he’s also got a weakness for women. In particular he has a weakness for Tina Vitale (Mia Farrow). Tina loves Lou as much as he evidently loves her. In fact, Lou won’t perform in front of Milton Berle unless both Tina and his wife (Sandy Richman) are in the audience. But Tina has heard that Lou is two-timing her with another woman and doesn’t want to attend. Danny pleads with her, begs her, and eventually follows her to her ex-boyfriend’s house. The ex (Edwin Bordo) is still hung up on her and thinks that she has left him for Danny. Since he also has mob ties, Danny’s life is now in danger.

Broadway Danny Rose is a bit of absurdist humor, a film that takes the situation we’re given and takes it to the most extreme but still believable position it can. Since this is a Woody Allen film, there’s always a little bit of a chance that something really bad will happen to Danny Rose, but we’re also confident that Allen likes his characters enough that Danny will make it out okay. Danny is plenty neurotic, as most of Allen’s personal characters are, but he’s neurotic in a different way than normal. Danny’s hang-ups are not about sex but about doing the right thing and doing right by his clients. He’s willing to go to any length for the people he represents despite his being burned by them over and over. Danny is a typical Woody Allen loser; the minute one of his clients starts to get a little traction, that client is stolen by another agent, sending Danny back to square one with his collection of losers.

It’s the extremity of the situation that makes the whole thing work. More than almost any other Woody Allen character, we want to see Danny Rose get a little taste of success. So many of Allen’s characters end up being completely self-absorbed and selfish, concerned only with their own desires, but Danny Rose, for as much of a loser as he is, is a genuinely sweet guy. All he wants is the best for his people, and he’ll go to the ends of the Earth to get it for them.

Allen is really the best part of the film. I have no real issues with anyone else here (and it was nice to see Paul Greco and his lazy eyelid as one of the thugs looking to kill poor Danny), but none of the performances really measure up to what Allen puts into the title role. This is a film all about heart and about not necessarily making it, but about failing in the grandest way possible, about pursuing a dream because it’s worth pursuing, even if it’s on someone else’s behalf.

I like that Allen made the decision to shoot the film in black-and-white. While the film would certainly have worked in color, it gives us a sense of the film taking place in the past, and that’s entirely appropriate for the story we see. There are a couple of moments shoehorned in that don’t really work in the grander scheme (the fight in the parade float warehouse sticks out. It’s funny when a couple of helium containers are shot and everyone’s voice gets all Chipmunk-y, but it’s a one-note joke that seems more in line for something like Sleeper than here), but this is a film with its heart in the right place, and that solves a lot of problems. 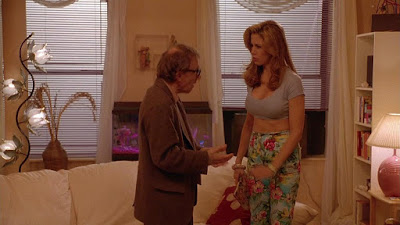 Mighty Aphrodite might be Allen’s most sexually explicit film. Having not seen all of his films, I can’t really be sure of that, but I can say that there’s more language encountered in this one film than in any three others of his combined that I’ve seen, and I’ve seen Everything You Always Wanted to Know about Sex. This story being Mighty Aphrodite is a lot more plausible than Broadway Danny Rose, which works in the film’s favor. It’s also one of Allen’s more meta films. Something akin to the Marshall McLuhan moment in Annie Hall happens pretty regularly here.

This happens because Allen has set up the film to function with a literal Greek chorus. A collection of people in flowing robes narrate the main events of the film for us. This group is led by F. Murray Abraham. Essentially the chorus is looking for parallels between the story here and Oedipus Rex. Abraham, when he’s not leading the chorus, frequently shows up to have direct conversations with our main character, Lenny Weinrib (Woody Allen).

Lenny is a successful sports reporter. His wife Amanda (Helena Bonham Carter) works at an art gallery. After a few years of marriage, she has decided that they should start having kids, but Lenny is uninterested. Amanda thinks they should adopt, something that Lenny is also opposed to. When a child becomes available, Lenny stands in opposition, but he’s a paper tiger. Amanda shows up with the infant and suddenly baby Max makes three. Lenny throws himself into parenting and it’s soon evident that Max is noticeably brighter than most of his classmates. This causes Lenny to think that maybe he should find Max’s birth mother to find out more about where Max may have come from.

And this is much of the film. Lenny does what he can to rescue Linda from the life she has chosen. For her part, Linda can’t figure out what is so terrible about her life. She doesn’t have a problem acting in porn films and turning tricks, although she does admit that she regrets giving up the child she had for adoption. Lenny, fearful of what might happen, refuses to tell her that her son is now his son. The relationship between them is similar to that of Danny Rose and Tina in Broadway Danny Rose in that it is completely platonic, at least for most of the film’s duration.

Lenny’s time spent with Linda and Amanda’s desire to start her own gallery (and her eventual relationship with a coworker played by Peter Weller) start to build a rift between the married couple. But eventually things work out in one fashion or another. Mighty Aphrodite is interesting in that it’s essentially a tragedy that ends up with a happy ending for everyone involved.

This is another case where the Woody Allen character is motivated not by his sex drive but by something much nobler. That he and Linda eventually do come together happens naturally, and happens in part because a relationship he has created for her has fallen apart at the same time that Amanda has walked out to explore the relationship with her coworker. Up to this point, Lenny’s motivation really is for Linda’s well-being. This includes not only trying to find her someone who can take her away from the life she is living, but involves him putting his own life at risk getting her away from her pimp (Dan Moran).

What’s primarily shocking here is how explicit the language is. Linda isn’t shy about describing her sexual experience, her stage name, or her crude sense of humor. For her, oral sex is simply a way to say “Thank you.” It’s a bit shocking at first, but soon isn’t, and the shock is played for laughs—almost everything in Linda’s apartment is sex or penis-related, and Lenny spends a good amount of his first visit noticing and trying not to notice the phallic cactus pots, pigs-having-sex clock, and the penis-shaped bubble dispenser in her fish tank.

No, the only real downside of the film is the Greek chorus. It’s funny at first to put this ancient theatrical device into a modern story. But as the film goes on, the chorus becomes more and more colloquial, and the initial joke fades. It’s not as funny as it should be, or at least it’s not funny for as long as it should be or could be. Perhaps used a little less or used a little differently it wouldn’t bug me as much as it does, but there’s nothing I can really do about that. It’s Allen’s film, after all.

While Mighty Aphrodite won’t claw its way into my top few Woody Allen films, it’s absolutely one worth seeing. Mira Sorvino, once the initial shock of her voice is gotten past, is picture perfect in this role, and for what it’s worth, so is Woody Allen.

Why to watch Broadway Danny Rose: Woody Allen perfectly in his element.
Why not to watch: We never learn what’s on the sandwich.

Why to watch Mighty Aphrodite: Allen goes verbally explicit and Mira Sorvino is perfect.
Why not to watch: The Greek chorus is fun but gets old.