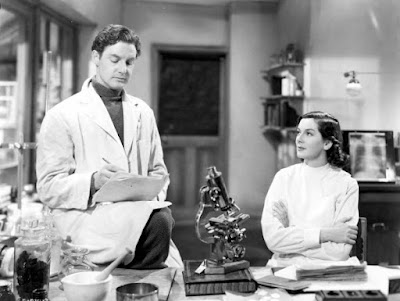 Every now and then, a movie surprises me. The Citadel turned out to be a pretty big surprise. I expected on thing based on the blurb for the film on Turner Classic Movies, or at least on the recording I had on the DVR. According to that blurb, The Citadel was about a doctor attempting to help mine workers and be thwarted in his research. That certainly happens during the course of the film, but it happens in the first act and is then pretty much forgotten.

This is, though, the story of a doctor. Andrew Manson (Robert Donat) has newly qualified as a doctor and takes a job in Wales. There are a number of obstacles to overcome, not the least of which is that in the world of The Citadel, the Welsh are completely backwards, hidebound, and fearing of any change. Manson realizes that many of the locals are sick because of problems with the local sewage system. With the aid of his friend Dr. Phillip Denny (Ralph Richardson), the two blow up the sewer with dynamite, forcing the British government to rebuild it. The tyrant of a wife of his boss forces him to quit, and he takes a job as a doctor for a mining company. The position requires that he be married, so he awkwardly proposes to the local schoolmistress, Chris (Rosalind Russell), who accepts.

It’s here that he realizes that many of the workers are stricken with tuberculosis. He does his best to discover the cause, realizing that the mining conditions almost certainly have something to do with it. The miners, however (remember, The Citadel hates the Welsh), aren’t happy with the treatments Manson creates and destroy his lab and his research. Manson leaves again, taking Chris to London to open up a practice. Things are tough for a year until a couple of lucky breaks start Andrew’s practice going. Suddenly he’s forgotten his tattered past. He grows a fashionable mustache and starts raking in the cash being more or less an ornamental doctor for the rich and hypochondriacal.

Chris isn’t happy with this change, though, and neither is Phillip Denny, who returns to their life with a proposal. Essentially, he and a team of other doctors will work on retainer for people, receiving a small fee each month and working as required for their patients. Andrew, seeing no reason to give up his lucrative career prescribing nonsense and getting paid for standing around, decides that this isn’t a good idea. He’s also not tempted to get back into research by Richard Stillman (Percy Parsons), an American doing work on lung problems despite not having a medical license.

Personal tragedies intervene in the third act, though. Andrew gets a pair of wake-up calls from a couple of less-than-attentive doctors and remembers his roots and his idealistic past. The third act of the film is more or less Andrew rediscovering himself and his love of the medical field. The ending, which I will not go into, is surprising in that it provides one sense of resolution of the main conflict of the film, but does not resolve the burning question that appears in the final 10 minutes or so. Essentially, we’re left with the idea that the outcome of a particular event isn’t particularly important if Dr. Andrew Manson has reclaimed his soul.

In a sense, The Citadel is three short movies about the same character. We have the opening (and longest) section that sets up Andrew’s life. We see him work for the betterment of his patients despite them being set against him working for their benefit, essentially wanting someone to rubber-stamp the treatments that they like. This ends in tragedy. In the second act, Andrew becomes that very doctor, making easy money and prescribing nonsense for people with too much money who want to feel like they are being taken care of. In the third act, he wakes up. Essentially, it’s three related episodes of the same person’s life.

But is it any good? Actually, it is. I’m not convinced that The Citadel is a great film or necessary viewing, but it’s interesting in a lot of ways. The film opens with a disclaimer about not intending to disparage the medical community, and then it spends about 110 minutes completely disparaging the majority of the medical community. It’s risky in that sense. While it feels unfocused on an initial view, it actually does hold together pretty well. It’s less a story than it is a character study of a single man over a specific period of his life.

Robert Donat is easy to like in the role of Andrew, at least for the first and third acts. He gets a glorious speech at the end that he delivers with real emotion. It’s probably this that earned him the Oscar nomination. He’s kind of a shit in the middle section, but he’s supposed to be. After all, the main thrust here is his fall from grace and eventual redemption.

What makes The Citadel noteworthy for its time is that in a lot of respects, it’s a modern film. It takes a serious run at poking holes in a highly-respected profession and doesn’t tie everything up in a bow at the end. That it’s not entirely successful is not really the fault of the film itself—in some ways this was an experiment in telling a very different story. On the whole, it works pretty well. At the very least, I was engaged the entire time.

Why to watch The Citadel: A compelling story with a surprising ending.
Why not to watch: Lack of focus.