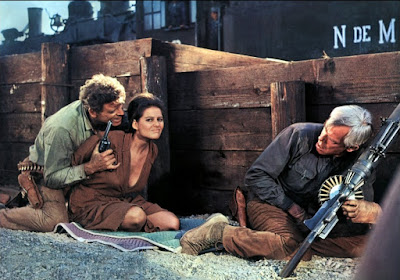 I record a lot of stuff off Turner Classic because there are a number of movies that aren’t available on NetFlix. I get a lot of these from libraries as well, but it’s hard to pass up when they just show up waiting to be recorded. The Professionals is one I recorded because it’s NetFlix unavailable. I went into it cold, knowing only that it sounds like an action film with that name. What a joy to discover that not only is it a badass action film, it’s also a film that has a “holy shit” cast list. Seriously—Lee Marvin, Burt Lancaster, Robert Ryan, Woody Strode, Jack Palance, Claudia Cardinale, and Ralph Bellamy.

What makes The Professionals interesting is that it’s clearly a Western, but it’s just as clearly a couple of other things, too. It’s a Western in that it takes place in the American West and features horses and gun battles, but it’s a much more modern story. It takes place either during or just after World War I during the tail end of the Mexican revolution. It has similarities to film noir. It’s a rollicking action film as well. It’s also not too dissimilar from war movies that feature a small band of men assaulting a much larger force.

This is not a film I want to spoil, so I’m going to go light on the plot. A rancher named Grant (Ralph Bellamy) discovers one day that his wife has been kidnapped and he has been left with a ransom note. Not wanting to pay the full amount, he instead hires a group of mercenary experts in their particular fields to rescue her. These men are the putative leader Fardan (Lee Marvin), a tactician and weapons expert; horse expert Ehrengard (Robert Ryan); Sharp (Woody Strode), a tracker and expert with firearms and a bow; and Dolworth (Burt Lancaster), a dynamite expert.

Their job is to track down Jesus Raza (Jack Palance), a man who used to ride with Pancho Villa. In fact, both Dolworth and Fardan know Raza and remember him as a good soldier. However, since the recovery of Maria Grant (Claudia Cardinale) means 410,000 per person, they don’t have any real qualms about killing him. Off they go to Mexico to trac down Grant’s wife only to find that what they’ve been told is not close to the true story.

I’m going to leave the plot there—this isn’t a movie to have spoiled for you. In practical terms, this is a film featuring gun battles and explosions that is temporarily punctuated by slow scenes that serve to keep the plot moving forward.

Because there is a lot going on , The Professionals is a little risky. On the one hand, if you stick Lee Marvin in an action sequence, it’s hard not to get good results. But that’s not what I mean. The Professionals has a much more difficult and twisty plot than is typical for a Western. Our good guys are cut from a mold that would feel more at home with modern films. These aren’t really good people no matter how polished their skills or how expert they are in what they do. There’s a hint of The Dirty Dozen here, since each of the four mean (especially Dolworth) come across as at least corruptible.

This is also one of those rare westerns that may well appeal to people who aren’t typically a fan of the genre. The more modern setting is a part of that. While much of the film looks like a typical Western, there are cars in it, which changes the whole feel of the film. In a way, it makes more sense to view this not as a Western, but as an action movie.

The Professionals was rightly not nominated for any Acting awards. This says nothing of the performances here. Instead, it’s far more of an ensemble cast, all of whom are very good. Lee Marvin, who is certainly the main character here, isn’t really in the film much more than a lot of others. In fact, since Jack Palance doesn’t speak much, which means he’s unable to chew scenery as he normally would.

The Professionals was a lot of fun. Go into this as cold as you can—read nothing more about it here or anywhere else. This is a very entertaining Western, a little noir-ish considering just how dangerous Maria turns out to be. So while The Professionals tries hard to be everything he can to everyone, or at least as much as it can, it's one of those rare movies that actually pulls this feat off pretty well.

Why to watch The Professionals: A classic badass Western.
Why not to watch: If you don’t like Westerns, you won’t like it as much as you should.