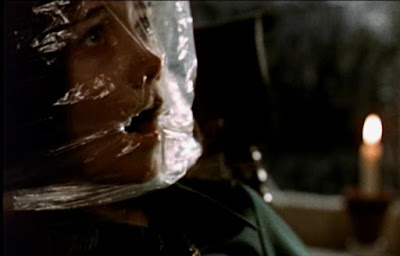 Bob Clark made two classic Christmas films. The first is perennial favorite A Christmas Story, which (along with Die Hard) is one of my favorite holiday movies. The other is Black Christmas, a film that in many ways helped define the slasher genre. Sure, Halloween is the one that made the genre viable and Bay of Blood was probably the first in the genre, but Black Christmas set much of the tone for what the slasher genre would become. There’s not a lot of gore, which may make it less exciting for the modern crowd, but what it lacks in blood it makes up for in being flat-out disturbing. It's worth noting as well that it's a rare film that appears on all three of my horror lists, but Black Christmas joins that rare company.

There isn’t much of a plot here, as the genre doesn’t demand one. A psychotic (who we never really see) breaks into a sorority house over the Christmas holiday and slaughters half a dozen people one by one. As far as it goes, there’s not really anything more than that. Oh, there are a few characters with traits and events in their lives and because of this we have a suspect or two, but really, Black Christmas is about a psychotic stalking young women and, for the bulk of the film, them not realizing that they’re really even in danger.

There are a few things that make this film noteworthy. First is that we never see the killer. We get something close to a glimpse of him at one point and a good shot of his eye in another, but a great deal of this actually comes from the killer’s point of view. This killer truly is psychotic as well. He babbles a lot, laughs and screams, and speaks incoherently throughout the film. It’s a disturbing place to be, and since much of the film is from his perspective, we’re almost literally in his head.

Second is the fate of Clare Harrison (Lynne Griffin). The first victim that we see, Clare doesn’t last 20 minutes, but she pops up now and then. Clare is killed by being suffocated with a dry cleaning bag, then dragged up into the attic and set into a rocking chair. We get frequent shots of her with the plastic sucked into her mouth as if she had been desperately attempting to breathe. These shots of Clare’s body are the most lasting visual memory of the film.

Third is that Black Christmas may well be the source of the “He’s calling from inside the house!” idea that When a Stranger Calls was based on five years later. We don’t happen to get to this realization until the last few minutes of the film, but it’s there, and it’s something the film has in its favor. Fourth and finally, it has one of the greatest tag lines ever written for a horror movie: "If this movie doesn't make your skin crawl, it's on too tight!"

There are also a couple of people here worthy of note. Olivia Hussey plays the central character and serves as our final girl to set up that trope. Hussey is a few years removed from her role in Romeo and Juliet, and she fits in here nicely. Her Jess is a character who is not willing to be led around. She’s obviously scared by many of the events, but this is not a character who is crippled by her fear. Jess is a fighter, which means that she established the “final girl” idea with a vengeance.

It’s Margot Kidder’s Barb who steals the entire film, though. Barb is a drunk and foul-mouthed, and Kidder plays the role to the hilt. There are few moments when she is on screen that Barb isn’t doing something funny or saying something offensive. She gives alcohol to children at a party, talks about turtles having sex in front of the parents of one of her sorority sisters, and gives out her sorority’s phone number to the police starting with the exchange “FE,” for which she gives the mnemonic “fellatio.” Barb is fun and funny, and makes the whole film a lot more entertaining. It was also interesting to see SCTV alum Andrea Martin in something vastly different from what she eventually became known for. Keir Dullea shows up as Jess’s boyfriend as well.

Is Black Christmas a great movie? Probably not. But it is a very good one, and an influential one. Hey, the thing is streaming for free on YouTube, and ‘tis the season for a little festive fright. You could do a lot worse.

Why to watch Black Christmas: A defining film for the horror genre .
Why not to watch: A potentially unsatisfying resolution