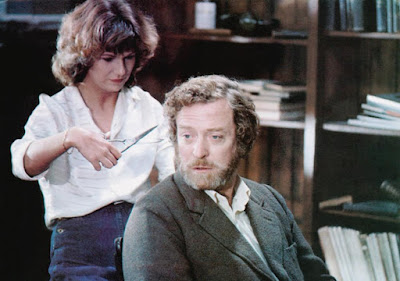 In the original story of Pygmalion, a sculptor who turns the heads of all the ladies makes a statue that is so perfect that he falls in love with it. When George Bernard Shaw wrote the play of the same name, he had a character “make” a woman from the streets into a lady of society, with love blooming along the way. Toss in music and you’ve got My Fair Lady. Hell, turn the man into a millionaire and the woman into a hooker and you’ve got Pretty Woman. In the case of Educating Rita, we keep the professor, but the woman who is to be turned into something more is a much more willing recipient of her education. In fact, it’s she who starts process.

Susan White (Julie Walters in her big screen debut) is a hairdresser who, based on her accent, is from Liverpool. She’s definitely blue collar and she and those around her have very low expectations of her, life, and the rest of the world. She wants more, though. She dubs herself “Rita” and decides to enroll in courses at Open University in the UK. Open University was doing distance learning before it was cool. The idea is the students would meet with a tutor once a week, do assignments on their own, and eventually test through their courses. Rita’s assigned tutor is Frank Bryant (Michael Caine).

Frank is divorced and claims that his wife left him because his output of poetry was merely the same thing over and over. Leaving him would give him something new to write about. Instead, he simply gave up writing altogether and threw himself not into his work but into the bottle. Frank is known to sometimes teach his classes from inside a whiskey bottle. His initial meeting with Rita is an interesting one. He doesn’t want to take her on as a student because he sees certain things in her. He recognizes that Rita is bright if rough around the edges and that she has a unique perspective on things and on literature. He realizes that if she goes through the university program, she’ll end up seeing the world like the rest of his students.

Rita struggles with the idea of education, not because of the difficulty of the material but because she has no one in her life to support her. Her husband Denny (Malcolm Douglas) wants her to give up her education and start making babies instead. Rita has decided that she doesn’t want to have children until she has “discovered herself,” something that leads to tension between them and eventually breaks up their marriage. Meanwhile, Frank’s live-in girlfriend Julia (Jeananne Crowley) is having an affair with Brian (Michael Williams), one of Frank’s colleagues.

Educating Rita does a lot of things well. One of the things it does really well is build the romance between Frank and Rita slowly and carefully. What works here is not that the romance is an unrequited one but merely one that is unfulfilled. There are definite sparks between Rita and Frank. These are people who genuinely care about each other but the relationship is never really fulfilled.

One of the biggest issues with this story is that we have to like both people. I like Wendy Hiller’s Eliza Doolittle in the 1936 version of Pygmalion, but not Leslie Howard’s Henry Higgins. I like Rex Harrison’s Higgins in My Fair Lady, but not so much Audrey Hepburn’s Eliza. In Pretty Woman, I don’t like either of the principle characters very much. In fact, Educating Rita might be the first time I really like both of the characters in the story. Julie Walters is absolutely charming as Rita. She’s funny, takes no shit from anyone, and isn’t afraid to tell Frank her mind. However, she’s unsure of herself initially and she plays it beautifully. Michael Caine, well, is Michael Caine. He’s almost always worth watching, and Frank is one of his best screen characters—a statement that says a lot and that I’ll stand by it.

The entire movie was sold for me in the scene where Rita and Frank discuss her essay on Macbeth. Frank has found the essay moving but realizes that for the exams that Rita is studying for, it is essentially useless. He knows that for her to progress in school he’ll have to change the way she writes and the way she sees literature, and he doesn’t want to do that to her, since in doing this he’ll be destroying something unique and beautiful. Rita doesn’t understand, assuming that he’s telling her that she’s not smart enough or good enough. Neither of them have the words to really communicate what they are trying to say. And Rita, who will not be stopped, takes her essay and burns it, since she wants to prove that she can do things the way she’s expected.

The scene works because Frank has become disillusioned with his life and his career. He sees that Rita is someone with her own unique perspective on the world and he doesn’t want to put her through the academic meat grinder so that her opinions are just a reflection of everyone else’s. This is the very reason I stopped studying literature, so this moment resonated with me completely.

Educating Rita is a smart film in that it has the impression of not taking itself very seriously. However, it is a very serious film in many respects. Rita and Frank are two people with very real problems and very real lives beyond this world of literature that they talk about, and the film never shies away from bringing these very real issues to the front and making them a part of the narrative.

I enjoyed this a lot. I’m surprised it worked as well as it did for me, but much of this comes back to the idea that good characters can take you a long way in any story, and Educating Rita has two great ones.

Why to watch Educating Rita: A new and entertaining take on Pygmalion.
Why not to watch: Do we really need another Pygmalion?

Posted by SJHoneywell at 7:45 PM