This is the twelfth in a series of twelve movies selected by the guys at YouFace. This is Nick’s fourth and final pick. 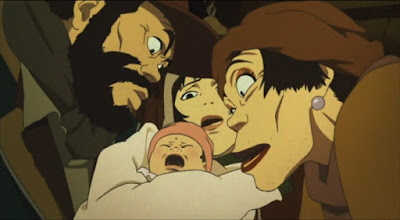 When Nick gave me Tokyo Godfathers (Tokyo Goddofazazu) to watch this year, he suggested that I save it until December since it takes place at Christmas. Make no mistake—this isn’t really a Christmas movie even if it has something like a Christmas miracle in it. It’s just something that takes place around Christmas. Nick likes making me watch anime because he knows that it’s an area of film where I am less familiar. I tend not to like fantasy and sci-fi-based anime because I always feel lost in it. Tokyo Godfathers features astonishing coincidences and strange events, but it’s based in the real world. It’s got that going for it.

Three homeless people, the drunk Gin (Toru Imori), the former female impersonator Hana (Yoshiaki Umegaki) and young runaway Miyuki (Aya Okamoto) discover an infant abandoned in a dumpster on Christmas Eve. The baby comes with a note that instructs the finder to take care of the child. There are also a few photographs that serve as clues to the child’s parents. While Hana immediately decides to raise the child, Gin and Miyuki want to turn the child over to the police. Hana eventually agrees, but instead decides to reunite the child (dubbed Kiyoko) to her parents. Thus sets off the chain of events that lead on a very circuitous route to the film’s resolution.

Along the way, we discover what has happened to put Gin, Hana, and Miyuki into their current homeless state. Gin, we learn, was a gambler who bankrupted his family, and he left due to shame, abandoning his wife and daughter (who was also named Kiyoko). Hana was an actual female impersonator who caused a scene in the bar where he performed, and felt that he could never return. Miyuki attacked her father and believes that she can never go home again.

As the film continues, we run across a number of people from the trio’s past as they get closer and closer to little Kiyoko’s parents. Essentially, while they solve the mystery of Kiyoko’s abandonment, they also reveal what led them each to abandoning their former lives.

I’d rather not give away much of the plot more than I already have. Tokyo Godfathers relies a great deal on staggering coincidence, which might be explained away as Christmas miracles, even if the film actually ends on New Year’s Eve. Still, while this doesn’t fall into the realm of science fiction or traditional fantasy, I’m tempted to call it magical realism simply for the number and size of the coincidences, lucky breaks, and amazing events that take place.

Tokyo Godfathers, despite its reliance on twists of fate that would make Dickens blush, gets a lot right. The primary thing it gets right is giving us good characters. Gin, Hana, and Miyuki are all terribly flawed people. Hana is over-emotional, a drama queen, but “she” is genuinely caring and, in her own way, loves both Gin and Miyuki. Gin is an alcoholic with a terrible past, but is actually a good person when there is trouble, and will risk what he must to do the right thing. Because of his past, he has a guilt-driven moral streak. Miyuki plays tough and uncaring, but all she really wants is a home and to feel wanted again, and she sees Kiyoko almost as a chance for her own redemption.

The art is beautiful as well. I do get frustrated with the exaggerated facial expressions so common in anime, but it almost works for me here. It’s still more than I like, especially in the character of Hana, but since Hana is so over-the-top, it’s a bit more forgivable.

I also like that Tokyo Godfathers doesn’t sanitize itself for the audience. There’s language, brief nudity, and some very ugly situations. This isn’t a movie for kids and, as my older daughter commented as the film wound to a close, it’s not a Christmas movie despite the time of year in which it takes place.

But is it good? I think it is. I mentioned this film in my wrap-up of the 2003 Best Animated Feature nominees, suggesting that at least on reputation it deserved to be in that line-up. It does. I’m not sure how I rate it next to The Triplets of Belleville, but it’s a hell of a lot better than Brother Bear. Yes, I know that’s faint praise. Still, a win is a win. Nick finished the YourFace team on a high note, bringing their total to 10.5 out of 12.

Why to watch Tokyo Godfathers: A unique story interestingly told.
Why not to watch: The coincidences might be a little too much.