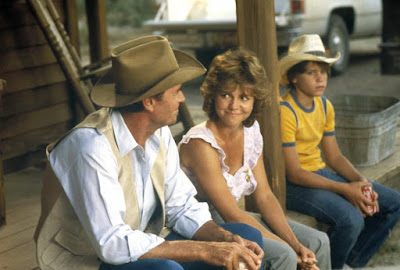 Those who remember James Garner tend to remember him much more as a television star than as a movie star thanks to Maverick and The Rockford Files, or possibly in his role as the spokesman for beef. However, he did have a film career and earned a single Oscar nomination for Murphy’s Romance. Garner’s most obvious quality is that he is immediately likable on camera. I’d have loved to see him play a real villain (if you know of a case where he did, please let me know) instead of a lovable cad or mildly immoral but endearing rogue. Murphy’s Romance is that sort of movie, although he’s less a rogue and more just a “character.”

Despite the movie being named after Murphy Jones (Garner) and being Garner’s only Oscar nomination, we’re actually focused on the subject of Murphy’s romance—Emma Moriarty (Sally Field). Emma has just arrived in a small Arizona town with her son Jake (Corey Haim, yes, one of the Coreys) after a recent divorce. Looking to start over, Emma has purchased a ranch and intends to start a business caring for and training the horses of the locals. She first meets the titular Murphy, the local pharmacist, while putting flyers out to advertise her new business.

Emma’s efforts to start her business encounter a series of setbacks, including her inability to secure a loan because she has no collateral and is a woman working a ranch on her own. Murphy refuses to lend her money as well, but does purchase a horse at an auction and hire her to train it and house it. He also manages to get other locals to house their horses at Emma’s stable as well. He even hires Jake to work at the pharmacy, which is old-timey enough to still have a soda fountain.

Romance doesn’t really bloom between Emma and Murphy more than it creeps like a slow-growing fungus. The age difference is a big part of it, since Murphy is more than a couple of dozen years older than Emma. Part of it is that Murphy is still nursing the idea that he is a widower, and after a couple of rough years is only recently coming back out of his shell. The biggest problem, though, is the sudden reappearance of Emma’s ex-husband Bobby Jack (Brian Kerwin).

A couple of things are soon evident. First is that Bobby Jack wants Emma back. Second is that Jake would love for that to happen. Third is that in spite of her best efforts, Emma is still attracted to Bobby Jack. Finally, and most importantly, it’s soon evident that Bobby Jack is essentially a grown up boy. He’s a walking id who cares mostly about his own fun and his own pleasures (we discover eventually that he’s got other kids elsewhere) who isn’t above stealing money from Emma’s purse when he wants some.

The bulk of the movie is the slow-building romance between Emma and Murphy both because of and in spite of the presence of Bobby Jack. The two men compete over her affections, Bobby Jack far more aggressively and Murphy much more slowly and carefully. And since this is generally a comedy despite a few dramatic elements, we’re going to get to the ending that we pretty much expect from the title. Honestly, there’s not anything really new going on here, so don’t expect to be wowed by where Murphy’s Romance ends up.

Murphy’s Romance has two major things going for it. The first is that this film is in the sweet spot of Sally Field’s film career when she was the 1980s version of America’s sweetheart. It’s hard not to like Field at this stage of her career, even though as my wife noted, she looks a lot like Kristy McNichol with her haircut in this. Field is easy to root for in this film. She’s hardworking and, as is often the case with romantic comedy heroines, “spunky.” We expect her to overcome her various setbacks and problems and are happy when she does.

The main thing, though, is that it’s pretty much impossible not to like James Garner. There was something in the man’s presence that made him immediately trustworthy. Garner is someone who I think it might be impossible to dislike in a film, which is why I’d love to have seen him in a serious villain role. Any roguish or quirky elements in any Garner character simply make him that much more lovable. He played (and plays here) the sort of guy it would be fun to know and hang around with. He’s got a good deal of wisdom, but doles it out carefully and without judgment on anyone. There’s a great little scene of him sitting with Jake on a park bench. Jake admits that he saw his father cheating during a card game. Murphy’s response is not moralizing, but just a comment that it’s up to Jake to decide if he follows his father’s path or goes somewhere different. There’s a respect that Murphy seems to give everyone that translates really well through the screen.

But really, did we need yet another film where a much older man romances a much younger woman? My wife walked in probably halfway through the movie and, quite seriously, asked me if Sally Field was playing James Garner’s daughter. I don’t understand this particular obsession with Hollywood films. Maybe it’s because movie executives are older men.

Regardless of this, Murphy’s Romance is decent and entertaining, almost entirely because of the presence of James Garner. Watch it for him, but beware of what is probably the most 1980s of soundtracks in existence, with the possible exceptions of Chariots of Fire and the legendarily bad soundtrack for Ladyhawke.

Why to watch Murphy’s Romance: James Garner was always likable, big screen or small.
Why not to watch: How many May/December romance films do we really need?