Get Along, Little Lamb Chops 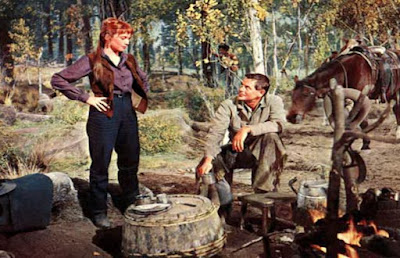 There are a few classic Western plots. The first is that the railroad is coming through town and people fight over whether or not the railroad will be a good thing or a bad thing. Generally speaking, someone is buying up all the land in the area to make money off the railroad and the peaceful and good ranchers will end up getting screwed by the landholder when the train comes through. The second classic plot pits cattle ranchers against sheepherders. With a title like The Sheepman it should be obvious which of these two plots is going to take place here.

Jason Sweet (Glenn Ford) rolls into a fairly stereotypical town (you know, one hotel, a saloon, lots of cattle ranchers) and immediately starts making waves. It’s not long before he has demonstrated to the people in town that he gets what he wants whenever he wants it and takes no guff from anyone. In fact, within those first few minutes, he has managed to bamboozle the local merchant into giving him a saddle at a steep discount, bought the livery stable owner’s personal horse for a pittance, and picked a fight (and won) against the toughest man in town.

In this very efficient sequence, we learn pretty much everything we need to know about Jason Sweet. We also encounter three of the other principle players in the area. These are the livery owner Milt (Edgar Buchanan), the local belle Dell Payton (Shirley MacLaine), and the leader of the local toughs, Jumbo McCall (Mickey Shaughnessy). All of this happens specifically because Jason is about to commit the biggest sin possible in this town: he’s bringing in a trainload of sheep to start grazing in the area. Since everyone else raises cattle on what is essentially public land, Jason’s plan does not go over well.

It’s not long before Jason has attracted the attention of the local leading citizen, Colonel Stephen Bedford (Leslie Nielsen). As it happens, Col. Bedford is an old acquaintance of Jason Sweet. In fact, he’s a good enough acquaintance that Jason knows his real name is Johnny Bledsoe and is a former gambler/gunfighter. Of course, Stephen/Johnny is engaged to Dell Payton, and of course, he runs a huge herd of cattle and wants the sheep gone. He exerts a great deal of social pressure, eventually putting Jason, Milt, the sheep, and Jason’s main shepherd Angelo (Pedro Gonzalez Gonzalez) on a train out of town—a plan that fails thanks to Jason’s determination and ingenuity.

Since this is a Western, it’s eventually going to come down to a couple of shootouts. The first is between Jason and a hired killer named Chocktaw Neal (Pernell Roberts) and his cronies and eventually the final showdown between Jason and Johnny Bledsoe. I’ll leave it to you to figure out how this all turns out.

The Sheepman’s biggest selling point is the very entertaining screenplay. This is a short film (about 85 minutes), and the first 70 of those minutes are a class on how to write a character who is just a little bit quicker and smarter than everyone else on the screen. Glenn Ford’s Jason is a complete bastard, but he’s also immediately likable because he’s so damn smart and entertaining. He’s continually one step ahead of everyone in the town and he’s often one step ahead of the audience as well. Much of what he does is a complete surprise, and yet at every turn, all of his actions are completely believable.

In fact, my biggest issue with the film is that in the last 15 minutes it all reverts to being a classic, textbook Western. Up to the point of Choctaw’s arrival, the film has worked entirely on the idea that Jason solves his problems with his brain rather than with guns or his fists. I’d have loved for that to continue to the end of the film. Oh, there are hints of this, but once we get to those final two showdowns, Jason is forced to rely on the help of Dell and Milt rather than getting out of things by thinking his way through them. The end, while satisfying, seems tacked on, and that’s a shame for something that was completely entertaining and original for the first three-quarters or so of its running time.

It’s almost worth saying that The Sheepman is a film that would be a great Western for people who don’t typically like Westerns, but the end kind of negates that. On the other hand, for fans of the genre, it’s different enough to be memorable and yet still firmly within the genre to make it comfortable.

Glenn Ford’s Jason Sweet, admittedly, is a bit of a Mary Sue. He’s better at everything than anyone. That said, I don’t really care, because he’s also a great deal of fun to watch on screen. Kudos to whomever did the casting, because I’m not sure any other star of the era could have pulled of the character with the right combination of assholery and joy.

I was thoroughly entertained. I recommend giving this a watch, even if Westerns aren’t your favorite genre.

Why to watch The Sheepman: A surprisingly clever story.
Why not to watch: It loses the plot a bit in the last 15 minutes.

Posted by SJHoneywell at 1:26 PM