This is the eleventh in a series of twelve movies selected by the guys at YourFace. This is Nolahn’s fourth and final pick. 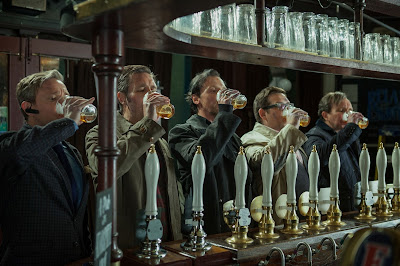 Third movies in a trilogy are often a disappointment. Think of all the trilogies where things punk out in the third film: X-Men, Spider-Man, Alien, The Godfather…the list goes on. So it is that I avoided The World’s End, the third film of Edgar Wright’s unofficial Cornetto Trilogy, for fear that it wouldn’t live up to the cinematic joys of Shaun of the Dead or Hot Fuzz. Nolahn wouldn’t let me get away with that, though, so here we are.

Gary King (Simon Pegg) is working on a career as a wastrel and alcoholic finishes what looks like a 12-step meeting where he relates the story of the best night of his life—an attempt to have a pint at all 12 pubs in his home town. This feat, known as the Golden Mile, was abandoned. In an attempt to reclaim that past glory, Gary decides to track down his four estranged high school friends and reattempt the feat.

There’s a reason that his friends don’t really want to reconnect with Gary, though. As it happens, Gary’s present form is merely an older version of the Gary that existed years before. He’s selfish, belligerent, and has no self-control. By contrast, his friends all of careers. Undaunted by this, Gar tracks down Peter (Eddie Marsan), Oliver (Martin Freeman), Steven (Paddy Considine), and finally Andy (Nick Frost) to recreate the attempt to complete the Golden Mile. None of them really want to do this, but see it as something like an attempt at closure.

The evening gets off to a rocky start when Gary finds out that Andy no longer drinks. Gary makes a continuous ass of himself, including hitting on Oliver’s sister Sam (Rosamund Pike). And then, partway through the new version of the pub crawl, all hell breaks loose. Gary picks a fight with a kid in the restroom of the fourth pub and discovers much to his shock that the kid is actually some sort of android. It soon becomes evident that a good percentage of the town has been converted into androids. The group decides that the best thing to do is continue going from pub to pub and attempt to figure out what is happening. Slowly but surely they all become drunker and drunker and the situation becomes more and more dire.

So let’s get to the meat and potatoes here. First, Edgar Wright knows how to film an action sequence. In fact, it’s the action sequences that do the most to kill any idea of the suspension of disbelief. Our characters become drunker as the film progresses, but they never seem to suffer any problems when it comes to hand-to-hand combat with the androids (which they call “blanks’). This really isn’t a problem with the film, though. It works in the sense that nothing here is really supposed to make a great deal of sense, and the action sequences are a lot of fun.

Wright is also a very smart filmmaker. He’s able to do more than just have his characters say funny things. There are a lot of visual jokes here as there are in all of his films. Another connection to the other two Cornetto films is the fact that anything a character says actually happens at some point in the film. Things get repeated, happening or being said once innocently and again with much more serious repercussions. This is the brilliance of Wright’s films, or at least Wright’s films with Simon Pegg and Nick Frost. The World’s End has the same style of humor as the previous two films, and that works to its benefit.

So what’s the problem? Why does it feel like I’m not as excited about this as I am about Shaun of the Dead or Hot Fuzz? The answer to this is back at the start of this review. The World’s End is the least of the three Cornetto films, and it’s the least by a fair margin. This isn’t specifically a knock on the film. Shaun of the Dead is one of the best horror comedies ever made and I like Hot Fuzz more than I like Shaun of the Dead. The World’s End would have to be almost perfect just to be playing in the same ballpark, and it’s not almost perfect.

The biggest issue is that the driving force of the plot—an alien invasion that is replacing people Body Snatchers-style—comes completely out of nowhere. There’s no indication that this is where we’re going. I realize that this would be how something like this would be discovered, but it comes completely out of left field here, and it doesn’t work as well as it could. All three of the Cornetto films deal with something completely implausible, but this seems like the most implausible of the three, and it suffers because of it.

Don’t get me wrong; this is still a very entertaining film and I had a lot of fun watching it. But there’s a part of it that feels like it’s trying too hard. Even brilliant cameos from Pierce Brosnan, David Bradley, and the voice of Bill Nighy can’t change this fact. I like it, but I can’t help but be a little disappointed in it.

Regardless, this is still a win. That puts the YourFace crew at 9.5 for 11.

Why to watch The World’s End: It’s completely insane.
Why not to watch: It’s the least of the Cornetto Trilogy.