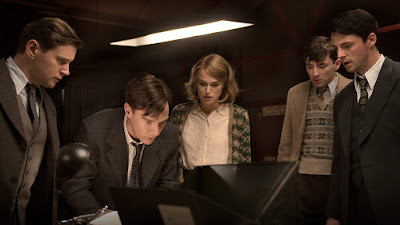 Of all the movies that appeared on my Oscar lists from 2014, The Imitation Game was the one that I think I was the most interested in. I knew quite a bit about Alan Turing going into the movie and I find cryptanalysis fascinating. It was a story that I wanted to see, and with a cast like this one, I went in with very high expectations. Alan Turing’s story is important. It was important when it happened and it’s still an important one.

And as sometimes happens, I’m of two minds on the film. On the one hand, The Imitation Game is a compelling story well told. On the other hand, it suffers from the same problems that Zero Dark Thirty does. It takes a story that is already compelling on its face without any need for embellishment and embellishes it anyway, adding drama it doesn’t need and changing reality for the sake of a story that doesn’t need changes to remain vital and interesting. I get why this happens sometimes, but I still find it frustrating, because movies often become our reality even when they don’t actually reflect that reality. I promise I won’t go off on a rant here or delve too deeply into how the film differs from the real history. Know, though, that many of the details of the success of Turing and his team were substantially different than depicted here.

The Imitation Game tells three stories. The first takes place in the past, when Alan Turing (played as a youth by Alex Lawther) was a bullied genius at school. This shows Turing’s first glimmer of his own homosexuality with his friendship with fellow student Christopher Morcom (Jack Bannon). The second story takes place in the 1950s in Turing’s present day. This story involves Turing (Benedict Cumberbatch) reporting a break-in to the police that eventually leads to his arrest and conviction for “gross indecency,” English legal code for “being gay.”

The bulk of the film involves the breaking of the Enigma machine. The Enigma was a German device used in World War II to encrypt messages. The machine was deceptively simple, but had millions upon millions of potential settings with a new setting used every day, allowing for the German military to freely send radio transmissions that could not be deciphered by the enemy. Turing and a team of mathematicians worked to break the German machine and discover a way to decipher the messages, providing much-needed intelligence. Ultimately, the breaking of the Enigma was kept a closely-guarded secret, not released to the public for 50 years after the war. And, incidentally, the development of the machine used to break the German codes eventually turned into the computer.

So I’ve already mentioned what bothers me about The Imitation Game: it doesn’t follow the actual history of what happened with Enigma and the team at Bletchley Park. However, despite the historical inaccuracies, there’s a lot here to recommend the film. First is Benedict Cumberbatch, who is stellar. I tend to like Cumberbatch and not just because his name is fun to say (and it really, really is). This is a very moving performance even if the film depicts Alan Turing as someone firmly on the autism spectrum. He is excellent in the role, and were he the only good thing about the film, it would be worth seeing.

However, it’s also nice to be reminded the Keira Knightley has real acting chops. It’s easy to forget that when her name so easily gets attached to a series of increasingly stupid Pirates of the Caribbean movies, but here, as cryptanalyst Joan Clarke, she is on top of her game. She is forced to deal with several difficult situations and she holds her own in every scene she is in, becoming nearly as compelling as Cumberbatch’s Turing. I always want to like Keira Knightley, and The Imitation Game is a good excuse to remember why that is the case.

It’s also nice to see Mark Strong in something other than an obvious bad guy role. Strong seems perfectly cast as MI6 agent Stewart Menzies. He’s cold enough to feel like a spy and good looking enough to pull off the role. It’s also good to see Charles Dance as badass Commander Denniston, who takes an immediate and enduring dislike to Turing. Dance is in full Tywin Lannister mode here, and there’s not a second where his anger isn’t believable.

I should toss out a nod to Alexandre Desplat’s excellent score. According to IMDB, Desplat penned the score in less than three weeks, but that’s merely a testament to the man’s skill. The score is just about perfect, adding to scenes without calling attention to itself. It enhances the film without dominating.

Ultimately, I wanted to like The Imitation Game a little more than I actually did because of the historical inaccuracies that didn’t need to be there. We didn’t need the Russian spy subplot. There evidently was a Russian spy in Bletchley Park, but the film gives us a personal connection between him and Turing and a blackmail plot that didn’t actually exist. That’s not needed here—keep in mind that the real story of Turing meant ending the war two years earlier than it would have, saving the lives of millions of people, and inventing the computer. But even with the historical problems, there’s enough of a story here that is real that is worth seeing. If nothing else, Alan Turing deserves the thanks and respect of the entire world, and The Imitation Game is a good start.

Why to watch The Imitation Game: It’s a story that needs to be told.
Why not to watch: It’s not the real story.