Film: In the Line of Fire
Format: DVD from Polo Public Library through interlibrary loan on rockin’ flatscreen. 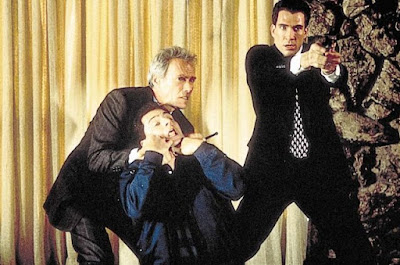 Certain genres follow certain formulas. We all know this. It’s what allows writers and directors to play with those very conventions. I get frustrated by movies that play so closely to an established formula for story. I’m always a little disappointed when a film lands so closely to the formula that I can predict where it’s going to go or that I know what major events are going to happen during the running time. In the Line of Fire is a movie that adheres pretty closely to a given formula. I didn’t predict every moment of it, but there weren’t a lot of surprises here.

Frank Horrigan (Clint Eastwood) is a Secret Service agent. In fact, he’s the only active agent who has ever “lost” a president; Horrigan (a digitally inserted, much younger Eastwood) was in Kennedy’s motorcade in Dallas. These days, Horrigan is still working the field. As the film starts, we’re introduced to Al D’Andrea (Dylan McDermott), his new partner. The two bust a drug operation, a bust in which D’Andrea is almost killed.

Shortly after this, Frank is sent to investigate an apartment. The landlady, wanting the late rent, entered the apartment and found a collection of disturbing items. Specifically, there are news stories of famous assassinations all over the walls. There’s also a magazine on model building and a copy of Time with the president’s head circled. Frank decides that this may well be a credible threat to the president and acts accordingly. He and D’Andrea return to the apartment with a warrant and discover everything missing. Everything,, that is, except for a picture of Frank running next to Kennedy’s car.

What follows is a cat-and-muse game as the killer, who identifies himself as “Booth,” (John Malkovich) plans to kill the president, but also considers Frank to be a friend because of his tragic past. Agent Lilly Raines (Renee Russo) exists almost specifically to be Eastood’s love interest. As the film goes on, our killer gets closer and closer to the president, all the while taunting Frank about his earlier failure to protect Kennedy.

All of this is well and good, but In the Line of Fire suffers greatly from being a film that seems carefully honed to give us a story that we already know with a slightly different main character and general focus. Do you think Frank will be redeemed by the end? Do you think that Frank’s flirting with Lilly is going to go somewhere despite their age differences? Do you think Booth is going to survive? What do you think is going to happen to Al D’Angelo? I give if you think for a minute you’ll get the answers to all of those questions correct.

That’s the biggest problem here. You can consider this paragraph a spoiler except for the fact that anyone familiar enough with film to read this blog who hasn’t seen this movie isn’t going to find these facts very surprising. I knew the fate of Al D’Angelo within the first 10 minutes of the movie. He is, after all, something like a law enforcement official working as the partner for the person who will be our main character. His fate is sealed from the moment he shows up. The same is true for the relationship between Frank and Lilly. There’s not a single surprise in this, and it’s disappointing, since this particular relationship is unnecessary. It’s funny that Frank comments that Lilly’s position as an agent is more or less something for the feminist vote, since it appears that Russo’s entire presence in the film is there for an unnecessary romantic subplot that could be pulled with no loss to the main story. After all, we can’t have a female Secret Service agent who doesn’t have a romantic subplot, can we?

Despite this, there’s something easily likable about In the Line of Fire. Eastwood’s Frank Horrigan is an easy character to like. Despite his past, there’s a subtle humor to him. Even Eastwood’s gravelly voice works for the character. I tend to like Renee Russo as well. There are some fun smaller parts filled by John C. Mahoney, Fred Thompson, and Gary Cole. There’s also a short cameo from Joshua Malina, who looks like he’s about 10.

But for as much fun as Eastwood can be, this is Malkovich’s picture. He was nominated for a Supporting Actor Oscar, and he deserved the nod. I discussed both Robert Mitchum and Robert De Niro playing psychopaths the other day. Malkovich is also adept at dabbling in that end of the psychological swimming pool. Malkovich’s psycho (eventually revealed to be named Mitch Leary) is cold and calculating. He’s smart, patient, and kills without remorse or conscience. Sure, the role fits into Malkovich’s wheelhouse, but that doesn’t make the home run any less impressive.

Ultimately, I liked this well enough. Playing a bit more with the plot would help it, but the dialogue is crisp and the characters are likable, if stereotypical. There was a lot of undeveloped potential here, though, and with a rewrite or two to get rid of some of that unpredictability, it would be a much stronger film.

Why to watch In the Line of Fire: There’s surprising chemistry between Clint Eastwood and Renee Russo.
Why not to watch: The plot feels like retread.