Crazy for Feeling this Way 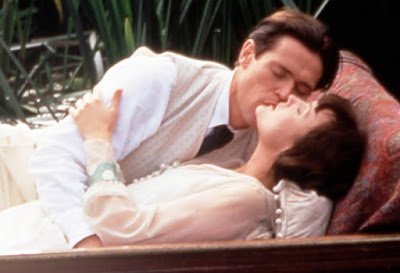 After I watch a film and write it up, I have a particular process I go through. I post the review, update pages with the direct link, post on Twitter, and then post a haiku about the film on Letterboxd. With Tom & Viv, that particular process was interrupted when I noticed just how few people had actually claimed to have seen this film on Letterboxd; the number is under 60. Now that I’ve seen it, I can’t say I’m surprised. This is one of those films that I wouldn’t have gotten through, save the fact that it’s on one of my Oscar lists.

There are plenty of movies that get forgotten over time. Sometimes, this is entirely justified and the movie doesn’t really have a good reason to be remembered. At other times, a film is simply overlooked or slips through the cracks of cinematic history. With Tom & Viv, I’m not sure which of these is the case. This is not a film that I can say I enjoyed watching. It’s actually pretty awful in a lot of ways, or at least the story is. However, it also contains one of the truly great acting performances I’ve seen in some time.

In a nutshell, Tom & Viv is the story of the marriage between T.S. Eliot (Willem Dafoe, called Tom in most of the film) and Vivienne Haigh-Wood (Miranda Richardson). There are a number of ways that this relationship could be described, but the best way is probably the simplest. Vivienne Haigh-Wood suffered from a particular variety of emotional problems, some of which appeared to be connected to a very unusual and intense menstrual cycle. This is the sort of thing that would have been politely called “women’s troubles” in the early part of the last century, when most of this film takes place. Ultimately, it’s pretty much a significant hormonal imbalance.

The romance between Tom and Viv happens quickly, and Tom is unaware of Viv’s particular medical issues. Her brother Maurice (Tim Dutton) attempts to warn him as the pair is about to elope, but the social customs of the time prevent him from really providing an adequate warning. Tom figures it out soon enough when he goes for a walk on their honeymoon and Viv, believing herself to be abandoned, trashes the room.

Eventually, her condition worsens to the point where she takes to threatening people, destroying property, and making a general nuisance of herself to everyone she comes across. T.S. Eliot, still in love with her, eventually consents to a separation after 18 years and having Viv committed to an asylum for her own protection. That’s pretty much the whole thing.

There are a couple of performances to discuss here beyond the one that actually makes the film worth watching. First is Rosemary Harris, who plays Viv’s mother Rose. Harris isn’t in a lot of scenes, but when she is, she commands the room. There’s a certain nobility to her performance, a sense of British entitlement that seems not a pretense but something actually deserved. She has an interesting role to play here, essentially being entirely devoted to Viv no matter the situation, siding both with and against her son-in-law depending on what is going on in Viv’s life.

Second is Nickolas Grace as Bertrand Russell, Eliot’s mentor. Like Rosemary Harris, Grace isn’t in the film much, but he’s great when he’s there. He also bears a particular resemblance to Russell, which only works in his favor. I’d have liked more of him if only because I rather like Bertrand Russell, but as the story of the film goes, he’s probably in it the right amount.

Willem Dafoe is a bit more of a problem. He sports a very awkward English accent in the film that is definitely an attempt to sound English without being from any specific class or region. This is explained away by the actual history—Eliot was born in the U.S. and essentially adopted English mannerisms and an English lifestyle and attempted to assimilate as much as possible. My biggest issue with Dafoe is that he’s too old for the role initially. Dafoe was pushing 40 and playing 26, and it doesn’t work. As the film continues, he looks the right age. Getting another actor for the role simply wouldn’t work—no one else looks like Willem Dafoe. But other than that, Dafoe turns in his normal solid performance.

So let’s talk about Miranda Richardson. She is both the reason to watch the film and the reason to avoid it. Her performance is truly nomination-worthy, but is also completely repellant because she is so completely off the deep end. There’s something fascinating about insanity, and she does this so well, but the actual performance is difficult to watch because of just how awful the reality is.

Ultimately, as much as I like the cast and respect the performance of Miranda Richardson here, I can’t say that I like this film. It’s ugly and difficult. That’s not always a problem, but here, it seems more like an exhibition of crazy than it does any sort of personal portrait. Oh, there’s some noodling toward this at the end, but it’s too little too late. There’s too much of a feel of a bug under a microscope here than of a human story, and that’s a shame, because Miranda Richardson’s performance deserved better.

Why to watch Mary and Max: There is no other movie like this one.
Why not to watch: You’ll feel guilty for laughing at parts of it.