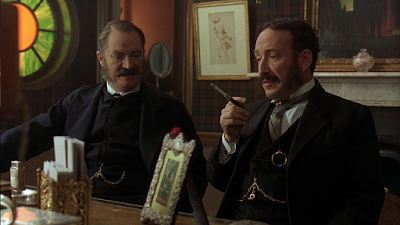 Over the past six years, I’ve become much less of a musical hater and have found a number of them that I appreciate. That doesn’t mean that I was especially enthused about the prospect of Topsy-Turvy about the almost break-up of lyricist William Gilbert and composer Arthur Sullivan and the creation of the comic opera The Mikado. The more than 2 ½ hour length was off-putting as well. But I had to watch it eventually, and today was as good as any other day.

As the movie starts, Arthur Sullivan (Allan Corduner) is seriously ill, but still manages to drag himself to the Savoy Theater to conduct the opera for Princess Ida, the latest Gilbert and Sullivan production. William Gilbert (Jim Broadbent) is unable to watch the opening night and paces the streets of London as usual. Princess Ida receives flat reviews and the general thought is that perhaps Gilbert and Sullivan have run out of ideas. Nothing seems to match the strength of H.M.S. Pinafore or The Pirates of Penzance. Sullivan retires to the continent to convalesce. When ticket sales for Princess Ida dry up in the summer heat and no new production to put on, theater owner Richard D’Oyly Carte (Ron Cook) reprises an earlier work called The Sorcerer.

Upon Sullivan’s return, the two reach something of a creative impasse. Gilbert’s newest idea for a libretto involves a magic potion, something that Sullivan feels the two have already done to death in previous operas with various magical elements. He wants to work more in the realm of emotion and probable events and refuses to write a score for the latest idea. The two are prepared to sever their partnership until Gilbert attends an exhibition on Japan and Japanese culture and finds himself taken with it. He is inspired to write a piece about Japan, and Sullivan likes the change and agrees to score it.

This happens roughly midway through the film. The rest of the story is about the creation of The Mikado. Company members fight for raises, object to the costuming, and struggle with the words and music. The biggest moment of tension happens when just before the opening Gilbert decides to cut the solo song of Mikado portrayer Richard Temple (Timothy Spall). The chorus reacts, thinking that the song should stay, and Gilbert eventually relents. We finally get an opening night with a few glimpses of the performance and then a little bit of aftermath where we see Gilbert’s wife Kitty (Lesley Manville) complain about some aspects of her life and Sullivan deal with an apparent pregnancy of his mistress Fanny (Eleanor David). And really, that’s it.

This leaves me with something of a problem. I can’t say that Topsy-Turvy wasn’t entertaining because I did enjoy watching it. But I can’t think of a film that had this much going on and still have nothing happen. There’s nothing that happens here. We get hints of conflict at times. One of the actors (Martin Savage), for instance, evidently has a morphine addiction (something we learn about in the last 30 minutes), but nothing comes of this. A great deal of time is spent hinting about something unsavory concerning lead actress Leonora Braham (Shirley Henderson), but nothing comes of this, either. In fact, the main conflict of the films are both quickly resolved. Gilbert comes up with a libretto Sullivan likes, and Gilbert quickly agrees to put Richard Temple’s song back in the show.

Because of this, I’m not really sure what to say about the film. It’s certainly well acted all the way through. I tend to like Jim Broadbent in general, and he doesn’t disappoint here. I’m less familiar with Allan Corduner, but he’s good as well. In fact, the entire cast is very good in the roles. But really, there’s almost no conflict going on here.

I’ve said multiple times in the past that I don’t really like it when the actual history of something is sexed up for the sake of plot. Topsy-Turvy is a case where some sexing up would have really helped. There’s so little going on here despite the constant motion and constant conversation on screen. We see the show being built, but the problems that crop up are the sort of problems that crop up on any show. People don’t like their costumes. They object to anything being too different from what they’ve done in the past. There’s no real tragedy to deal with and not much to overcome. Essentially, Gilbert and Sullivan write one of their most popular and enduring pieces and manage to put the show on without much of a hitch.

Because of this, it’s difficult to recommend Topsy-Turvy despite the quality of the cast, the music, and the impressive costuming. If ever a story needed to have the drama cranked up to make it more compelling, this is the prime example. Interesting that this would be the case in a story about a playwright and a stage composer, no?

Why to watch Topsy-Turvy: It plays a lot faster than its 161 minutes would seem.
Why not to watch: While entertaining, it doesn’t really go anywhere.