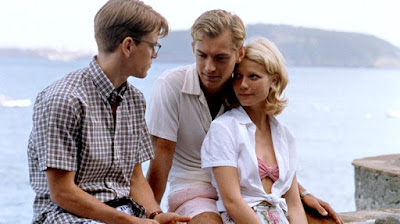 Matt Damon was around before 1997, but that was the year he really hit it big. Of the films he did in those first heady years of his fame, The Talented Mr. Ripley is the one that seems not to fit with the others. And yet this is a film that very much plays to his strengths. Matt Damon, like him or not, is blessed with the ability to be both likable and sympathetic. Most people want to like Matt Damon, and in The Talented Mr. Ripley, wanting to like Matt Damon’s character is what gives the film its strength.

Everything starts with a borrowed jacket and a chance meeting. Tom Ripley (Damon), sits in at a cocktail party as the pianist. He is approached by wealthy industrialist Herbert Greenleaf (James Rebhorn), who has noticed the Princeton logo on Ripley’s borrowed jacket. Greenleaf is concerned about the direction his son’s life has taken. Young Dickie Greenleaf (Jude Law) his bumming around Italy, frequenting jazz clubs and wasting his father’s money. Herbert Greenleaf offers Tom $1,000 (a decent sum in the 1950s) to go to Italy and convince Dickie to return to New York. Tom agrees on the pretense that he knew Dickie at Princeton despite not really knowing him and having never been a student at Princeton.

This sets up the essential fact about Tom Ripley. His talent mentioned in the title is for impersonation, forgery, and fraud. He sails to Italy, meeting Meredith Logue (Cate Blanchett) on the way. Almost on a whim, Tom claims to be Dickie Greenleaf traveling under an alias. Once in Italy, Tom tracks down Dickie, who is living with his fiancée Marge Sherwood (Gwyneth Paltrow). Tom insinuates himself into Dickie’s life, pretends to like jazz, and eventually agrees to string along Dickie’s father for additional money so the trio can continue living in Italy.

Things become complicated for four significant reasons. First, we get the inklings that Tom Ripley is, in addition to a goof forger and cheat, in love with Dickie Greenleaf. Second, the arrival of Dickie’s friend Freddie Miles (Philip Seymour Hoffman) change the relationship between Tom, Dickie, and Marge, since Freddie is openly contemptuous of Tom. Third, when Freddie plans a ski trip for the winter, it’s evident that Meredith Logue will be there—Meredith who only knows Tom as Dickie. Fourth, and most seriously, Dickie’s lifestyle shows some problems when he gets a local Italian girl pregnant and then abandons here, causing the girl to drown herself in the harbor.

Eventually, Dickie decides that he has grown tired of Tom’s company and the charade of bilking his father for more money. Tom proposes getting his own place, but Dickie tells him that he’s grown tired of his company. It’s important to note that this happens while the two are out in a small boat. Rejected, Tom lashes out and beats Dickie to death with an oar, then scuttles the boat and swims to shore. What follows is a long game of cat-and-mouse between Tom Ripley, the people who knew Dickie Greenleaf, the Italian authorities, and Herbert Greenleaf, who comes from America to locate his son.

The most impressive thing about The Talented Mr. Ripley is that the movie makes Tom Ripley a sympathetic character. It helps that he is played by Matt Damon, since Damon tends to be someone with whom it is easy to sympathize. But in some respects, giving the audience Tom Ripley as the sympathetic character is akin to having us sympathize with Norman Bates in Psycho. The difference here is that we’re well aware of just what sort of person Tom is with a lot of running time left to go—Dickie’s death comes before the halfway point of the film. In that respect, it’s a lot closer to a film like Peeping Tom, giving us someone who is specifically dark and has lethal moods and still having us want him to succeed in some respects.

This is also one of the weak points of the film, though. While Tom Ripley is the character with whom we sympathize, it doesn’t always work that well. Both Marge and Meredith are better characters in that respect since both are ill used by Tom Ripley (Marge being equally ill used by Dickie). There’s a part of the audience that wants to see Tom get away with things, but at the same time, I think most people would like to see him get caught as well.

In that respect, Matt Damon feels a little miscast, like we’re not really sympathizing with Tom Ripley, but with Matt Damon, since he was in movies like Good Will Hunting and Saving Private Ryan. Jude Law and Philip Seymour Hoffman, on the other hand, are perfectly cast as wealthy, spoiled bastards. Cate Blanchett is a breath of fresh air in this as she always is. I’d have loved to see her in this more.

Ultimately, I think The Talented Mr. Ripley is a film that works, but it’s not one I could see myself watching frequently. I like a lot of what it does, but there’s something here that prevents me from really accepting it fully.

Why to watch The Talented Mr. Ripley: Kind of a neo-noir, but it’s more insidious than that.
Why not to watch: We’re asked to sympathize with a terrible person.