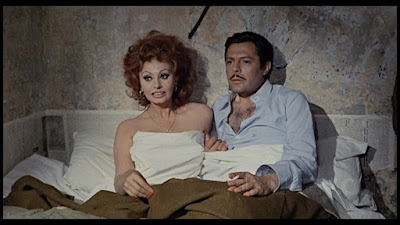 The school I work for has recently signed up for a new movie database called Kanopy. I did a quick check of what it has, and there are a few I’d really like to see lurking in tis corners. When Marriage Italian Style showed up from NetFlix, I knew it was time to take Kanopy on a test run as the back half of a double feature. As it happens, of these two movies, Marriage Italian Style was released second. However, it only makes sense to have the marriage before the divorce.

The premise for Marriage Italian Style is entertaining. A wealthy businessman named Domenico Soriano (Marcello Mastroianni) is summoned to the home of his mistress. She has collapsed and is near death. We get a long flashback from him to tell us the story of him and his mistress. The two met during a bombing raid in World War II. Domenico finds a young girl in a brothel who refuses to leave because the public will see her and know where she works. This is Filumena Marturano (Sophia Loren), and it’s the start of a long relationship.

Domenico is nothing like faithful, but since Filumena is a prostitute, that’s not that big of an issue. He leaves on business for months at a time, but always returns to her, and the two have something like a long-term relationship. It’s evident that Filumena loves Domenico in some way and that he is at least fond of her. He takes her out of the brothel and puts her in an apartment, for instance. It’s also evident that he’s ashamed of her in some respect, since he won’t be seen with her in public. Eventually, he introduces Filumena to his mother, but does so because it allows Filumena to act as his mother’s caretaker.

After 20+ years of this, she finally gets fed up, hence the sickness at the start of the film. Essentially, she is faking to get Domenico to marry her before she “dies.” He does, finally feeling some sympathy for her, and then she’s suddenly good as new. Why does she go through all of this bother? First, because she has had three sons over the course of her career and claims that one of them is Domenico’s. Second, and most importantly, after treating her like a servant-with-benefits for a couple of decades, Domenico has decided to marry someone else.

There are some lovely comic moments in Marriage Italian Style. The best of these comes when Domenico is on the phone with his fiancée only to be confronted by the very healthy and very angry Filumena. Domenico trying to figure out which of her sons are his contains some solid comedy as well. But the comedy comes in fits and starts across the film. It goes for far too long without a laugh for something to be really called a comedy. But it has enough of these moments that it would be difficult to call it a real drama. It’s not sure what it wants to be, and so it’s less than a straight comedy or a straight drama.

Sophia Loren was nominated for her role as Filumena. It’s certainly an interesting role in a lot of ways. Lore ages in the film in certain ways and the makeup works really well at making her younger or older as appropriate. I like Sophia Loren, and I like her here. She plays an almost-caricature of an Italian woman, but it all works fully. For what it’s worth, I like Mastroianni as well, and there’s a serious asshole-ish vibe he exudes in almost every scene. This is a man who uses people and who sees nothing wrong with doing so. He handles the role well, and I buy him completely.

It’s just unfocused overall. It wants to be a comedy and a drama and a romance, and it’s not enough of any of those three things to qualify. It’s good, but I’m not prepared to call it great. 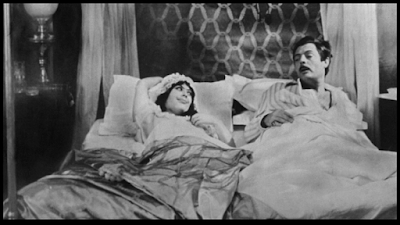 Divorce Italian Style, on the other hand, may well be great. I think it is. Like Marriage Italian Style, this is a film that wants to be a comedy, a drama (to an extent), and a romance. However, it balances everything beautifully and manages to mainly succeed in all respects.

Ferdinando Cefalu (Marcello Mastroianni again) is the scion of a faded Sicilian family. He lives in a dilapidated castle. Ferdinando, called “Fefe,” has only three real problems in the world. The first is that he is madly in love with Angela (Stefania Sandrelli), his young niece. Second is that his wife Rosalia (Daniela Rocca), is clingy and needy and he’s grown bored with her. Third and most serious of all is that in Italy at the time of the film, divorce is illegal (thank you, Catholic Church), so he can’t act on any of his desires.

Fefe enjoys imagining different ways he could kill Rosalia (stabbing her and turning her into soap, quicksand, blasting her off in a rocket) until one day he hears of a story that changes his life completely. A sensational news story hits the area of a woman who killed her husband in a fit of passion when finding him in the arms of another woman. So, logically, if Fefe could get Rosalia to have an affair with another man, he’d be able to kill her and get a very light sentence thanks to the passionate and honor-related nature of the crime. The problem, of course, is finding someone to be Rosalia’s lover.

He catches a break in the person of Carmelo Patane (Leopoldo Trieste). Years before, Carmelo had been interested in Rosalia. In fact, he probably would have married her. The only thing that prevented the union of Carmelo and Rosalia was his disappearance and presumed death in North Africa during World War II. By the time he returned, Rosalia, thinking him dead, had married Fefe. To get the two together, Fefe hires Carmelo to refurbish some ancient frescos in the family palace. Then, all he has to do is wait for the magic to rekindle and he can “stumble upon” Carmelo making time with his wife, giving him a perfect opportunity to do her in and be freed to marry Angela.

Of course, since this is a comedy, nothing is going to be that easy. In fact, Fefe will be thwarted at every turn. There will be mechanical issues with his tape recorder, interruptions from servants including young Sisina (Margherita Girelli), and the fact that Carmelo is already married. Through all of this, Don Cefalu rolls with the problems. He almost never appears agitated, in fact, except when Rosalia won’t let him alone. As the film rolls to a close, we get the ending we more or less deserve. At least that’s the ending Don Ferdinando Cefalu gets.

After being mildly disappointed with Marriage Italian Style, I didn’t have high hopes for Divorce Italian Style. I’m actually glad I watched them in this order, because my expectations for Marriage would have been unreasonably high otherwise. Divorce Italian Style is wicked and fun. There’s a real sense of slyness in this film, of wanting to be just a little bit naughty and playfully sinister. It’s a beautiful thing, and while we know that something is going to go wrong with Fefe’s plans constantly, the ways in which things get fouled up are creative and entertaining.

Mastroianni was nominated for this role, and I have no good reason to think why he shouldn’t have been. It’s a great performance, one of the better ones of his career. Fefe is quirky and strange and a lot of fun to watch on camera and all of this is the work of Mastroianni.

Divorce Italian Style is a great deal of fun. I’d watch it again and I figure I’d laugh just as hard at a lot of the jokes the second time as I did the first. This is the kind of film that can result when someone is given the chance to make something a little outside the norm. Divorce Italian Style is outside enough to be interesting but not so far away that it can’t be followed. I liked this a lot.

Why to watch Marriage, Italian Style: Sophia Loren in her prime.
Why not to watch: Not funny enough for a comedy, not serious enough for a drama.

Why to watch Divorce Italian Style: It’s darkly comic, surprisingly so.
Why not to watch: No good reason. It’s worth seeing.