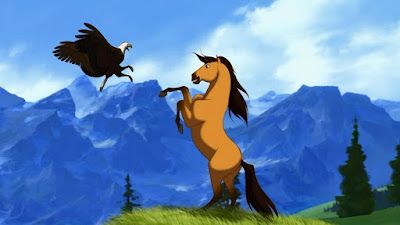 Of all the films on the Best Animated Feature list, one of the ones that was a complete cipher to me going in was Spirit: Stallion of the Cimarron. No one I know has seen this. Actually, it’s truer to say that I know of no one who has seen this, since I’m sure that there are a couple of people who have and I’m just not aware of it. I had no idea what to expect with this; with no known opinion, I had no idea of even the critical take on the film.

The story isn’t one that is going to be a huge shock, even based on the cover of the DVD case. We start with an unnamed wild mustang being born and growing up sometime roughly just pre- or just-post American Civil War. This will be our protagonist, who isn’t named until the end of the film. Eventually, our horse friend meets with civilization, both white and Native American and comes to something like an understanding of life in both cultures. Spirit is unquestionably a film that is pushing a particular agenda here, one that will be familiar to any movie that features a “noble savage” sort of culture. Yeah, this one’s not any different in that respect.

Okay, so we’ve got an obvious story with an obvious message. Fortunately, Spirit’s directors make some very interesting choices that are completely unexpected. First and foremost, while the story is told from the point of view of the stallion, this is not a talking animal film. The horse does speak, but only in voiceover narration. In the story itself, the animals communicate with each other, but only in the noises actual horses make (and, in fact, actual horses were recorded for these sounds). The story doesn’t suffer for this decision at all. Even without the narration, which appears sporadically and only to tie scenes together, the story is easy to follow with just the various horses’ actions and human speech. Evidence of the lack of voices for the animals is evident in the fact that Rain, a mare ridden by one character and a love interest for our main character, doesn’t appear as a voiced character.

A second decision that really helps the film is that aside from a few early scenes of the horse as a foal, Spirit never aims for cute. There are no wacky sidekicks or obvious moments playing cutesy. This isn’t to say that there’s no humor in the film, but it’s a much more aggressive type of humor. Much of it comes from the horse’s various run-ins with humans and their attempts to tame him. The lack of cutesy sidekicks—even the two foals that become mildly important in one scene aren’t in the film enough to be either cutesy or sidekicks—enhances the film. If nothing else, it makes the film feel like a film made for kids that feels like one made for adults.

The voice work is also pretty good. In fact, the most disappointing voice work comes from Matt Damon, who doesn’t seem terribly enthused about anything that he’s saying. The standouts here are James Cromwell voicing a military colonel and Daniel Studi as Little Creek, the owner of the aforementioned Rain. The voice work is good and expressive. It’s never forced and it never dips into broad comedy or anything that feels stagy or overplayed because the film is for a younger audience. Instead, the work is, if anything, respectful of both the material and the main audience for the film.

So what’s the problem? Length, for a starter. Spirit: Stallion of the Cimarron clocks in at 83 minutes, and that’s including a pretty substantial end credits. Actual running time without those credits is a lot closer to 75 minutes, pulling it slightly above the barest minimum for a feature length film. I’m not sure that a lot more could have been done here in terms of story—it’s compact in what it gives us, and it’s remarkably efficient. But it does feel lightweight because of how short it is.

However, in spite of this Spirit: Stallion of the Cimarron is surprisingly good. I’m not ready to call it a great animated film or put it on a list of my favorites, but it’s one I would watch again without much prodding. The animation is good as well, and some of the artwork is fantastic. The film used both traditional and digital animation (Dreamworks called the blend “tradigital”), and both are used well. This is especially true in some of the sweeping Western landscapes. It’s simple, but it has no pretensions of being anything more than the simple story it presents, and presents well.

Why to watch Spirit: Stallion of the Cimarron: It’s a lot better than you’ll expect it to be.
Why not to watch: It’s barely feature length.