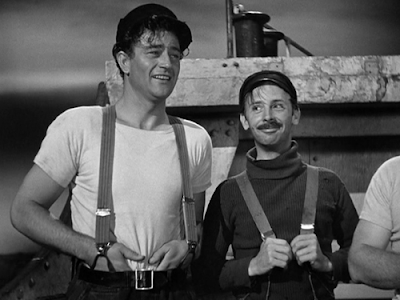 John Ford was one of five Hollywood directors who went to war in the 1940s. Of the five, Ford essentially joined up before the U.S. entered the war under the assumption that we’d be there eventually. He was also the only one to enlist in the navy. Ford’s main concern initially was figuring out how to film in wartime conditions. The Long Voyage Home, adapted from a series of Eugene O’Neill short plays, was Ford’s first attempt at this. This is tangentially a war film, since we’re dealing instead with the Merchant Marine, but it’s taking place in wartime conditions, and has a plot updated from the plays to include real events of the ongoing conflict.

So, while this is a war film, we’re not going to see or hear a single shot fired. Instead, we’re going to spend time both at sea and in port with the crew of a tramp steamer called Glencairn. It’s a diverse crew of Americans, British, Irish, and Swedes who seem more or less to get along and who are happy to live under the sway of Aloysius “Drisk” Driscoll (Thomas Mitchell). Drisk likes a good scrap and loves a good drink, and so as he goes goes the crew of Glencairn. On board with him are Smitty (Ian Hunter), a taciturn Brit with upper-class tendencies; Cocky (Barry Fitzgerald), a man who has seen too much to go back to land; Yank (Ward Bond), who’s happy to be wherever he is; and Ole Olsen (John Wayne), a Swedish farmboy taken to sea and longing to get back home.

So what happens is a lot of not much for most of an hour and 45 minutes. The men smuggle some local women and booze on board while in port and get busted by the captain (Wilfrid Lawson) and off the ship goes to Baltimore. Here, the ship is loaded with dynamite to be sailed through the war zone, putting everyone on board in danger. While none of them are too happy about it, they’re all willing to stay on board and work to get the cargo through, the bonus pay being one of the perks of the job. On the way to England from Baltimore, rough seas cause the anchor to break loose. Yank is killed trying to fix the problem. Since this is a film from 1940, it’s not a shock that Yank gets a good five-minute death scene.

The next big event regards Smitty, who has never attempted to get to know the other men on board. Because of this, he’s suspected of being a spy for the Germans. This gets him attacked by the rest of the crew, who dig through his personal belongings and discover the truth. Smitty lost his commission in the British navy because of his alcoholism. He’s stayed at sea because of the embarrassment and in spite of his wife’s pleading for him to come home. How that we know this about Smitty, all that’s left is to find a way for him to die with some dignity. This happens when the ship is strafed by a German plane.

The third act focuses on Ole Olson, who has decided to go home to see his mother after 10 years. Once the ship hits land all of the men get two years’ pay. All of the men determine that their prime goal once the ship docks is to get Ole a ticket to Stockholm and onto his ship. Of course, there are other ships that need crew and want to shanghai a strapping young man like Ole, and since there are women and booze in port, things get a little dicey.

The Long Voyage Home has a major plus in that it is truly beautiful to look at. The cinematography is fantastic. Whatever problems John Ford foresaw in filming on the water in possible military conditions, he overcame quickly. It’s an impressive piece of work.

Ford does all that he can to make the film as interesting as possible. That he’s only partially successful can’t be all his fault. The truth is that the Merchant Marine isn’t very exciting and the characters aren’t very interesting. Since the film is an ensemble, we don’t spend too long with any of the characters, which means we don’t get to know any of them very well. In a way, that’s not a problem because none of them are interesting or likable enough to want to get to know them that well.

It’s not hard to guess that this screenplay was cobbled together from a series of short plays because there’s not really a story that runs through the whole thing. It’s instead a series of episodes that occur then resolve and we move on to the next one.

I’d have liked to have liked this more than I did. I think it’s an impressive piece of filmmaking, but the story itself isn’t worth the time.

Why to watch The Long Voyage Home: The beginning of John Ford’s military career.
Why not to watch: The Merchant Marine isn’t that exciting.