Film: Ghost
Format: Streaming video from NetFlix on The Nook. 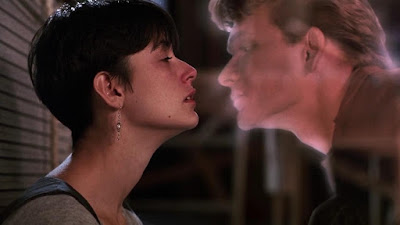 The biggest shock in revisiting Ghost was not that Demi Moore can and Patrick Swayze could act. It’s that this was directed by Jerry Zucker who is far more famous for directing films like Airplane! I say “revisiting” in the sense that I think I’ve seen all of Ghost at one point or another, but I’m not sure I ever watched it start to finish. There’s a lot here worth recommending, and that comes from someone who doesn’t generally choose romances and who also has no supernatural beliefs. Obviously, they did something right here.

Chances are good that you’re already familiar with Ghost, so I’ll keep the plot summary to a minimum here. Banker/financier Sam Wheat (Patrick Swayze) and his artist/pottery wheel aficionado girlfriend Molly Jensen (Demi Moore) have decided to move in together in a big old loft that they are refurbishing. Naturally, since Sam pulls down bank at the bank and Molly is evidently successful enough to get pieces in galleries, their place is pure moviedom fantasy.

Sam notices some problems in some accounts and changes passwords to figure out what is going on. Shortly after this, he and Molly are accosted on the street by a mugger who, in the struggle, shoots Sam, killing him. Sam misses the window/tunnel of light and instead essentially hangs around to figure out what happened to him. He’s unable to affect the real world, but he can observe, and what he observes is that his killer (Rick Aviles) is working with Sam’s colleague Carl (Tony Goldwyn) in a money laundering scam. Sam was killed because Carl can’t access his clients’ laundered funds.

With this knowledge, Sam turns to fake psychic Oda Mae Brown (Whoopi Goldberg) to convince Molly that he’s still around and that she is in danger. Of course, since this is a romance, there’s going to be plenty of danger. Carl will put the moves on Molly, Sam will conspire with Oda Mae to screw up Carl’s plan, and eventually there will be physical threats and just desserts all around. No surprises, right?

As I said above, there’s a lot that Ghost gets right. One of the primary things it did right was cast Whoopi Goldberg in the role of Oda Mae. Goldberg won a Supporting Actress Oscar for this role, and I can’t say it’s not deserved. She’s a difficult actress to classify in a lot of ways, and a lot of her films have demonstrated that her talents aren’t easy to use. They’re used perfectly here. Molly can get a bit too damsel-in-distress for me, Sam often comes across as too earnest, and Carl is a whiney shit. But Oda Mae is worth watching. She’s funny, kooky, and in the end a genuinely decent person. Goldberg plays her beautifully.

It’s also worth giving a nod to the great Vincent Schiavelli, who plays the ghost on the subway who teaches Sam to move physical objects. Schiavelli was always great in character roles. While he has only a couple of scenes here, they are memorable ones.

Ghost may fall down a little in terms of the plot. This is essentially a crime film with a supernatural element. However, I’m not troubled by this at all. Just as there are plenty of good movies that seem to have clichéd moments or plots, Ghost manages to hit all of the right notes and hit them correctly. If nothing else, it will be remembered for the pottery scene with “Unchained Melody” playing over the spinning clay. It’s a hell of a classic scene, and it’s one that people can reference for a reason.

In fact, the only real complaint I have is that “Unchained Melody” crops up too damn much. Look, it’s a great song and all, but we get it two or three times during the course of the film and then an orchestral version toward the end that plays for what seems like half of the film’s length.

Admittedly, that’s a minor complaint. Ghost has been at the top of a lot of lists of romantic films since it came out 25 years ago, and it’s stayed there for a reason. Even if it dips into the Heaven/Hell mythology (it kind of has to, after all), it does so with a purpose and does it pretty well.

I remembered Ghost fondly through my disjointed viewings of it, and I was right to do so. It’s better played start to finish, even if I knew and recognized all of the scenes going in—or at least the most memorable ones. Actually, if I have a real complaint here, it’s that like any truly great Hollywood romance, real life simply doesn’t and can’t measure up to what we get on celluloid. You can’t compete with a memory, and those of us who are flesh and blood simply can’t compete with a ghost.

Why to watch Ghost: It’s the premiere supernatural romance.
Why not to watch: Your own real-life romances will simply never measure up.

Posted by SJHoneywell at 5:28 PM