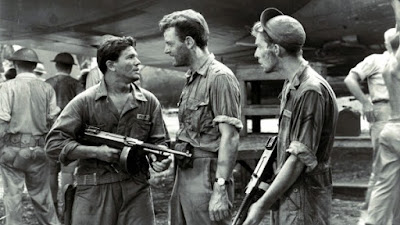 I have a strange fascination with World War II propaganda films. I think the main reason for me is that World War II feels like the last time we had a right to make propaganda films in the U.S. Air Force is one with which I was not familiar. As the name implies, we’ll be spending a lot of time in the air with this one, and in the case of this film, it will be with the crew of a single bomber. This was a film made in 1943, right in the middle of the war, and it takes us from the day before Pearl Harbor to the start of air raids on Japan. Actually, based on the timing of the film, it might well be the famous Doolittle raid that is hinted at in the closing moments.

As the film starts, we meet the crew of the Army bomber Mary-Ann, and it is a motley assortment. Our pilot is “Irish” Quincannon (John Ridgely), a former instructor with a wife and young son. He is assisted in the cockpit by Williams (Gig Young) and bombardier Thomas McMartin (Arthur Kennedy). The navigator is Monk Hauser Jr. (Charles Drake), son of a legendary World War I pilot. The ship’s crew chief is Robbie White (Harry Carey), who has a son stationed on Manilla. Rounding out the relevant crew are radiomen Peterson (Ward Wood) and Chester (Ray Montgomery), assistant crew chief Weinberg (George Tobias), and gunner Joe Winocki (John Garfield). It soon comes to light that Quincannon and Winocki know each other. Winocki was washed out of pilot training because of an accident, and Quincannon was the man who pulled the trigger.

The day before the attack on Pearl Harbor, the men of the Mary-Ann are shipped to Hawaii. The attack happens while they are in the air, and the squadron is forced to look for alternative landing sites. The Mary-Ann is damaged and, in a piece of blatant racism in terms of the screenplay, the plane and crew are attacked by Japanese-American civilians. Eventually, the plan makes it to Pearl Harbor where they are told that many of the planes on the ground were sabotaged by Japanese-Americans. It’s almost as if Air Force was created in part to justify the internment camps.

Anyway, the crew eventually make it to Wake Island and are forced to head immediately for the Philippines. It is here they find out that Robbie White’s son was killed trying to get his plane off the ground under fire. The plane is patched up again and is volunteered for a one-bomber mission against an incoming fleet. Despite knocking a bunch of fighters out of the sky, the Mary-Ann takes damage and the crew ditches. Quincannon is mortally wounded, but it’s failed pilot Winocki who gets the ship back to the ground safely.

Desperately, the crew attempts to repair their plan before the Japanese ground forces attack. Another crewman is lost in a mission when he is brutally gunned down by Japanese aircraft while parachuting from his stricken plane. Eventually, the Mary-Ann takes off again, heading for Australia. Naturally, since we need to end this with a victory of some sort, they spot a Japanese fleet headed for Australia, radio it in, and then circle until a bomber wing arrives. Naturally, the Mary-Ann takes part in the festivities, and does so with a unique modification to the plane. During repairs in the Philippines, Winocki saws off the back of the plane and crawls inside with a machine gun to act as a tail gunner.

Okay, so there’s plenty of license being taken here. Evidently, there are no ill effects hanging out of the back of a plane with no protection at 20,000 feet. There’s also license taken with the sheer number of Japanese planes being taken down by the bomber crew. Almost everything they shoot at seems to go up in a burst of airplane parts and fire.

The point of Air Force is, of course, morale. While the Americans certainly lose their share of battles here, the battles they lose are the ones that the American people already knew about: Pearl Harbor, Wake Island, and the Philippines. In each case, a point is made that the Japanese pilots only attack when they have superior numbers, and they flee in one-on-one situations. That’s part and parcel for a propaganda film. More troubling is the idea that Japanese-American civilians immediately sided with Japan, a fear that was the cause of the internment camps in the first place.

Another issue is that Air Force doesn’t so much have characters as it has character types. Would it surprise anyone to know that one of the characters on the plane is from New York and talks about it constantly? Or that the guy from Minnesota—evidently Minneapolis, no less—still talks about milking cows? Or that Winocki, who wants to leave the Army, becomes the most gung-ho of the group once the war starts? Of course not. This isn’t about giving us characters we care about, but about giving us the experience of disparate people coming together for the single task of destroying the Japanese military machine.

As such, there isn’t a great deal to recommend Air Force. This is standard propaganda fare with Japanese planes exploding from short machine gun bursts and patriotic speeches from Roosevelt. It's fully laden with stock footage and obvious models. I get the lack of funds for movies and can forgive quite a bit. What I can’t forgive is the serious injustice done to Japanese-Americans who found themselves mistreated by their own government and told here that they deserved it.

I admit, I’d probably have loved this in 1943. Today, too much of it simply doesn’t stand.

Why to watch Air Force: Solid WWII propaganda.
Why not to watch: It’s unrepentantly racist.