She Wears Seal Coats by the Seashore

Film: Song of the Sea
Format: DVD from Rockford Public Library on laptop. 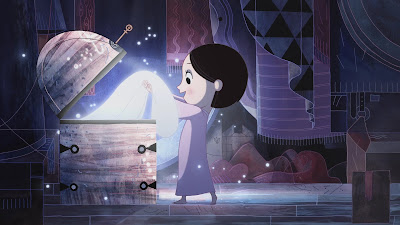 There are plenty of times that Oscar nominates the wrong film, but there are times when a nomination brings attention to a film that would otherwise be missed or ignored. This is what happened in 2009 when The Secret of Kells was an unheard of film that managed a nomination. Filmmaker Tomm Moore earned another, similar nomination in 2014 with Song of the Sea, which uses some similar animation to tell another story based in Celtic mythology. This time, the story is centered more in the modern world, although one pre-cell phones.

Ben (David Rawle) is a young child awaiting the birth of a new sibling. He’s helping his mother Bronach (Lisa Hannigan) prepare a room for the new child by helping paint scenes of Celtic myths on the nursery walls. Ben goes to sleep, with his mother giving him the gift of a seashell horn. That night, the child comes.

Flash forward about six years. Ben is now ten and his sister Saoirse (Lucy O’Connell) is about six and has never spoken. Bronach evidently disappeared the night Saoirse was born, an event that has broken their father Conor (Brendan Gleeson). Conor’s mother (Fionnula Flanagan) disapproves of the way Conor is raising his children, alone on an island in a lighthouse. She arrives for Saoirse’s sixth birthday and seems to disapprove of everything.

That night, Saoirse plays Ben’s shell instrument and a series of fairy lights appear and lead her to a chest in the house. Inside is a white coat that she puts on. She wanders out into the sea and discovers that she is a selkie—a kind of fairy that can turn into a seal. When the grandmother finds Saoirse washed up on the beach the next morning, she decides that the children don’t belong in a lighthouse, and takes them with her and doesn’t even let Ben take his giant sheepdog Cu. But now separated from her Selkie coat, Saoirse becomes sicker and sicker, and getting her back to the lighthouse becomes much more serious. Throw in some characters from fairy mythology, and you’ve got a story wrapped firmly in a mythology that will be unfamiliar and yet strangely familiar to most viewers.

The fantasy elements of Song of the Sea are what will be most appealing to many viewers, but at its heart, this is a film about growing up and accepting responsibility. Through the beginning of the film, until he meets the terrible owl witch Macha (also voiced by Fionnula Flanagan), Ben’s attitude toward his sister is one of annoyance and anger. In Ben’s mind, his mother’s disappearance happened because of Saoirse, and he resents her because of this. A great deal of the story turns on Ben’s desire to help his sister and come to terms with the world he lives in.

Much of the film, in fact, is about acceptance, not of other people, but of ourselves. Macha, who steals the emotions of fairies and turns them to stone isn’t motivated by evil, but by a genuine desire to remove the terrible emotions from people and fairies who are suffering from them. Ben’s confrontation with Macha (which happens with a good bit of running time still to come) happens not because Macha is terrible, but because she is misguided in her desire to help others. Her inability to accept her own emotions is what has caused all of the problems in the fairy world.

So let’s talk selling points beyond the story. I can imagine that there will be people put off by the animation, but those people are wrong. Song of the Sea is a truly gorgeous film, using a similar flat animation style as The Secret of Kells, but upgraded in many ways. The people and fairies have a great deal of character despite not being fully-modeled 3D. It’s entirely possible that a lot of modern kids won’t like the look of the film, and that’s a shame. However, Ben is completely relatable to any kid with a younger sibling who may seem to get more attention. He's a real kid in a lot of ways, and that's a strength of the film.

I like the characters as well. I’d have loved for Conor to be a larger part of the film. Much like Macha, Conor is unwilling to accept the reality of the situation that he finds himself in, and only by accepting what is true does he come to realize the mistakes he has made. As is often the case in a film like this one, the best character is the animal. I’d watch a movie about Cu; he’s fantastic.

There was a great deal of controversy at the Oscars this year when The LEGO Movie was not nominated for Best Animated Feature. Ask most people, and it was nominations for films like The Tale of Princess Kaguya and Song of the Sea that most people blamed for the snub. While I agree that The LEGO Movie should have been nominated, it would have been a terrible shame if Song of the Sea had been ignored. This is a beautiful and magical film that deserved much more attention than it got.

It may well be that while it appears to be intended for children, Song of the Sea is a fantasy that will appeal more to adults. Regardless, this is a film of a quality that doesn’t happen too often. I’m happy to have had the chance to see it.

Why to watch Song of the Sea: A unique story and beautiful old-school animation.
Why not to watch: It’s old school enough that it might be a hard sell for a lot of kids.