Not Another Alzheimer's Movie

Film: Away from Her
Format: DVD from DeKalb Public Library on rockin’ flatscreen. 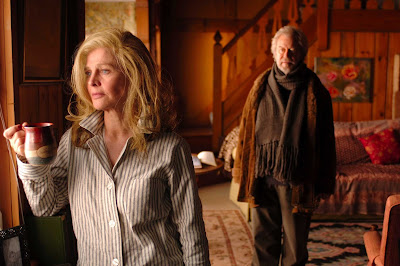 There are times when I get frustrated with my Oscar lists. The biggest personal issue I have is that the genres that I tend to like—action, science fiction, horror—are rarely represented in the categories I am watching. In a sense, that’s sort of why I started doing this. It’s a way to further expose myself to films that I would otherwise miss. What that often means, though, is that a lot of what I watch ends up depressing me. Such is the case with Away from Her. I can’t say I’m ever really in the mood for a movie about Alzheimer’s disease.

One thing I’ll say for it is that it doesn’t take long to get started. We’re introduced to Grant (Gordon Pinsent) and Fiona Anderson (Julie Christie). They have been married for more than four decades, and now Fiona is starting to fade. It’s evident that she has an early-onset form of Alzheimer’s. She has started to forget where things are and forget what she is doing. As she begins to fade, she makes the decision (and it is her decision) to move to a care facility.

For Grant, the move to the facility comes with the necessity of being apart from Fiona for 30 days. Despite his previous infidelities, the two have never been apart for anything close to this length. Fiona enters the facility, Grant goes the 30 days, and he returns to visit his wife. What he discovers is that Fiona has forgotten him completely. She has lost all of her years with him and has instead formed a strong bond with Aubrey (Michael Murphy), another patient.

Much of the rest of the film is Grant attempting to come to terms with who Fiona has become. Part of this is the belief that she is using this as an opportunity to hurt him for those past infidelities. Much of Grant’s own coping comes in searching out Marian (Olympia Dukakis), the wife of Aubrey, who has since pulled her husband out of the facility and brought him home. Part of that is undoubtedly Aubrey’s sudden connection to Fiona, but much of it is a financial decision.

But that’s really it. There’s not a silver lining here. There’s just a continuous slide of Fiona losing her past and herself as the disease takes over. In fact, the glimmers of her past that she suddenly remembers for a moment simply make things more difficult since those moments are so fleeting and come more and more rarely. I find movies like this so difficult because there really is nothing hopeful here.

It’s not surprising that Away from Her is a film that trades on its performances. Julie Christie was nominated for the role, and it’s a very good performance all the way around. I can’t imagine that this is something easy to do as an actor. Christie needed to essentially remain the same person and yet constantly lose pieces of herself mentally throughout the film. There’s a sense of her losing so much, and yet she’s seamless in the role.

I also like Gordon Pinsent here, and am mildly surprised at his lack of a nomination. In many ways, this is much more Pinsent’s film than it is Julie Christie’s. While she may be the character who is changing the most, it is Pinsent’s Grant that is forced into these changes consciously and is forced to deal with the fallout from his life and his wife’s illness. There is a weariness to him that doesn’t feel like an act. This is a man who has been dealt a terrible hand and genuinely doesn’t know how to play it, but is playing it as best he can.

Two other performances merit a mention here as well. The first is Olympia Dukakis. It may well be that I’m predisposed to like Olympia Dukakis, but I like her here. The other is Kristen Thomson, who plays Kristy, one of the nurses at the facility. Kristy in many ways acts as Grant’s sounding board and unofficial psychiatrist. It’s she who finally dresses him down for his past and who puts Fiona’s illness and his own guilt into perspective. It’s a small role, but a meaningful one. In many ways, it’s Kristy who forces Grant into his actions at the end of the film, and it’s a better story for her presence.

Regardless of this, Away from Her is not the sort of film I typically enjoy watching. I will never say that it’s not well made or well-acted. Sarah Polley did the smart move of not putting her own direction front and center. Instead, she steps off to the side and allows the story to play, which is exactly what the film needed. But it’s also not a film that I think I’ll watch again. There’s only so often I need a film that makes me want to jump off a tall building.

Why to watch Away from Her: Two stellar performances.
Why not to watch: It’s a wrist-slitter.

Posted by SJHoneywell at 6:23 PM

Email ThisBlogThis!Share to TwitterShare to FacebookShare to Pinterest
Labels: Away from Her, Best Actress, Best Adapted Screenplay, Sarah Polley