Picks from Chip: Mary and Max

This is the eleventh in a series of twelve movies selected by Chip Lary at Tips from Chip. 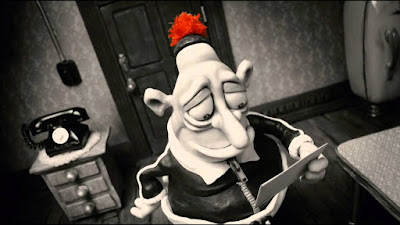 Mary and Max is a film I’d heard a lot about, almost all of it positive. I went in with great hopes for the story, in no small part because it is surprisingly drab and ugly visually. I’m not saying it doesn’t have its charms, but Mary and Max is almost shockingly ugly. It’s also almost exclusively in shades of brown and black with a few spots of red. It’s also the darkest movie I’ve seen in a long time.

Based on that paragraph, I’m guessing that Chip is worried, so I’ll quell his fears now. There’s a lot to like with Mary and Max, even if the darkness is almost oppressive at times. Our characters are the ultimate outcasts of their respective societies and when anything good happens to either of them, save at the conclusion, it’s only a temporary reprieve for something worse about to happen. Many of the events feel like the worst of all possible worlds.

And yet, almost in spite of itself, it’s screamingly funny. This is the story of two people for whom the world does not make much sense. Young Mary Daisy Dinkle (Bethany Whitmore as a child, then Toni Collette) lives in Australia. Her weird birthmark makes her something of an outcast. Her father pays no attention to her and her mother is a drunk and a shoplifter. One day, on a whim, she tears a name out of an American telephone book and writes a letter to Max Jerry Horowitz.

Max (Philip Seymour Hoffman) is morbidly obese and is eventually diagnosed with Asperger’s syndrome. Like Mary, he lives in a world that is confusing to him and has no friends. While Mary’s letter sends him into an initial panic, he eventually writes back. The two start up a correspondence, telling each other about their lives. There are a few breaks in the chain of letters that happen when Max has emotional breakdowns from some of Mary’s questions. Over time, Mary grows up, marries the boy across the street (voiced by Eric Bana), and gets a degree in psychology, studying conditions like Asperger’s.

The truth is that I don’t really want to go into a great deal of detail on the plot, because Mary and Max is a film that should be experienced cold, with as little foreknowledge as possible. Suffice to say that every couple of minutes contains some pitch black comedy, most of it coming from the deadpan narration of Barry Humphries.

In fact, there are events in the movie that I felt almost guilty about laughing at. Despite this, Mary and Max is very touching and heartfelt, and is one of those rare movies that, at the end, contains an emotionally perfect moment. Not a lot of movies get me to tear up, but this did. Much like Monsters, Inc. and Cinema Paradiso, the ending is so emotionally perfect that I freely admit to an audible sob.

Yes, it’s visually ugly, but it’s also visually fascinating, and the animation, while blobby and weird, is also very good. These are characters easy to like and to root for. Everyone feels like an outcast sometimes, and both Mary and Max feel like outcasts all the time. They’re both easy people with whom to sympathize. That, more than anything, is indicative not of great animation, but of great writing.

I am sure that with all of the acclaim that Mary and Max received, I would have watched it eventually. I am very pleased to have watched it now, though, because this is a movie that more people should know and watch. It’s also worth noting that my wife walked into the room when I was about half an hour in, and she stayed for the rest of it, and liked it for the same reasons I did.

This is a short review, but there’s not a great deal more to say here. Mary and Max won’t be a movie for everyone, but it is the sort of film that everyone should try. As much as I liked The Man from Earth, Jean de Florette, and Death at a Funeral, this is also the best movie that Chip has given me to watch this year. This is obviously a win. You’re 10.5 for 11, Chip.

Why to watch Mary and Max: There is no other movie like this one.
Why not to watch: You’ll feel guilty for laughing at parts of it.